In November 2018, Ian Gibson attended talk by Derek Hurst of Worcester Archive and Archaeology Service.  Here he summarizes the main points of the talk. 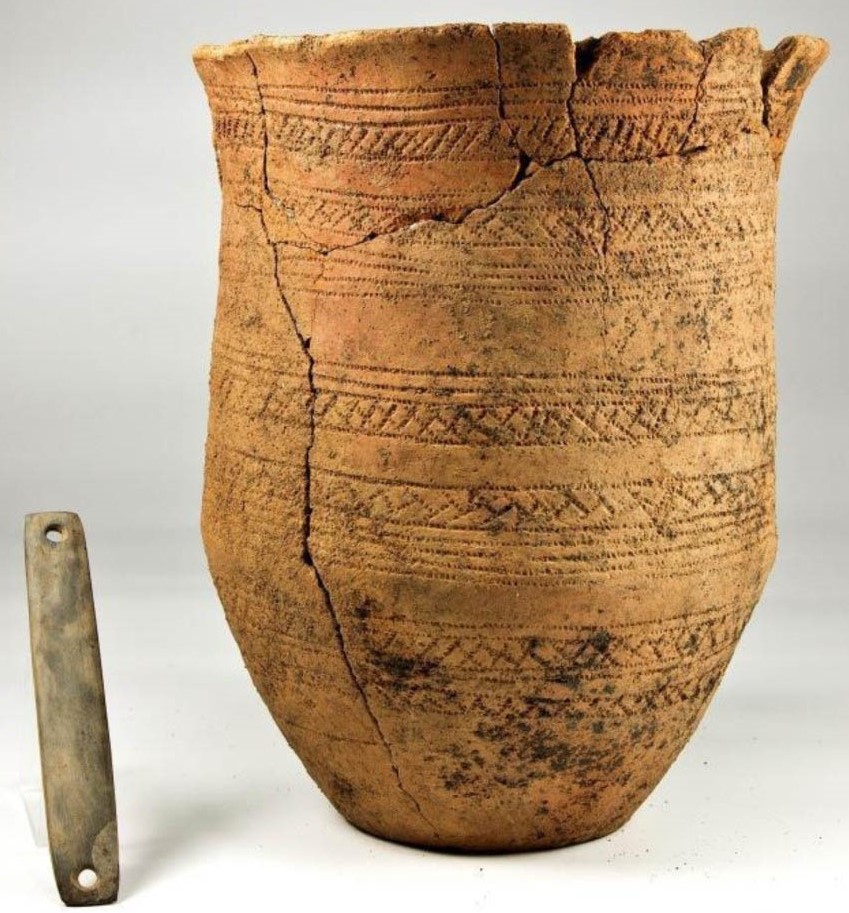 This find came to light as a result of the 2016 dig paid for by Redrow Homes prior to the development of an area of land between Aldington and Offenham, 2.3 miles NE of Evesham.

The find was of a burial site located in gravel near a possible crossing point of ancient trackways one of which went north to what is now Badsey. The site contained a complete bell shaped pottery jar of the type known as a beaker. The style is of the “Low Carinated” type from 2500 -2100 BCE.  The shape and decoration of the jar is very similar to jars found to the East across the channel. The area of the burial contained looser gravel than the surroundings and this is what drew the archaeologists’ attention

A grave in chalk at Amesbury near Stonehenge from the same period contained the well preserved skeleton of an archer with a beaker pot close by. This has been subject to isotope research and the surprise finding was that the archer came from the Alps region. The skeleton and teeth in the Aldington burial had dissolved away completely in the acidic gravel soil, leaving only a stone wrist guard or brace parallel with the position of the forearm. This in itself is evidence that the body was of an archer as at Amesbury. Two flint arrowheads were also found, one of which had a broken tip. At Amesbury a broken arrowhead was also found and the tip was found in the body of the archer so there is a suggestion that something similar happened at Aldington but the tip was not found here.

About 300 similar sites have been analysed in England, Wales and Scotland. The main finding is that these people were not local. They had origins in the Steppes, a huge area of Eurasia stretching from Hungary and Romania to China.

This is actually the second discovery of a Beaker period artefact in Aldington. In 1867 another stone archery brace was found 5 feet down in gravel. The stone was similar to polished Neolithic axes of the Group VI series from the Lake District. The recent brace find is made of highly finished stone from Devon/Cornwall.

The arrival of the Beaker People in Britain was of huge significance in the settlement of Britain after the Ice Age.  Recent DNA analysis has provided a clearer picture of the origins of the people who settled in Britain after the last Ice Age which ended about 11000 years ago. The first settlers arrived by land and were genetically similar to other people across Europe in the Mesolithic. The second big wave of immigration was in the Neolithic by people related to those of the Iberian Peninsula. They were dark haired with quite dark skin and brown or green eyes. The Beaker people arrived at the beginning of the Copper Age and many had light skin with fair hair and blue eyes. Within a few hundred years the population of Britain contained only 10% of the Neolithic DNA, suggesting an almost complete repopulation by the Beaker people. This scale of change has never happened since so there is a lot of interest in what actually occurred.

Analysis of skeletons and DNA shows that the arrivals were not just male warriors but included equal numbers of women suggesting that it was complete families that came over to settle.