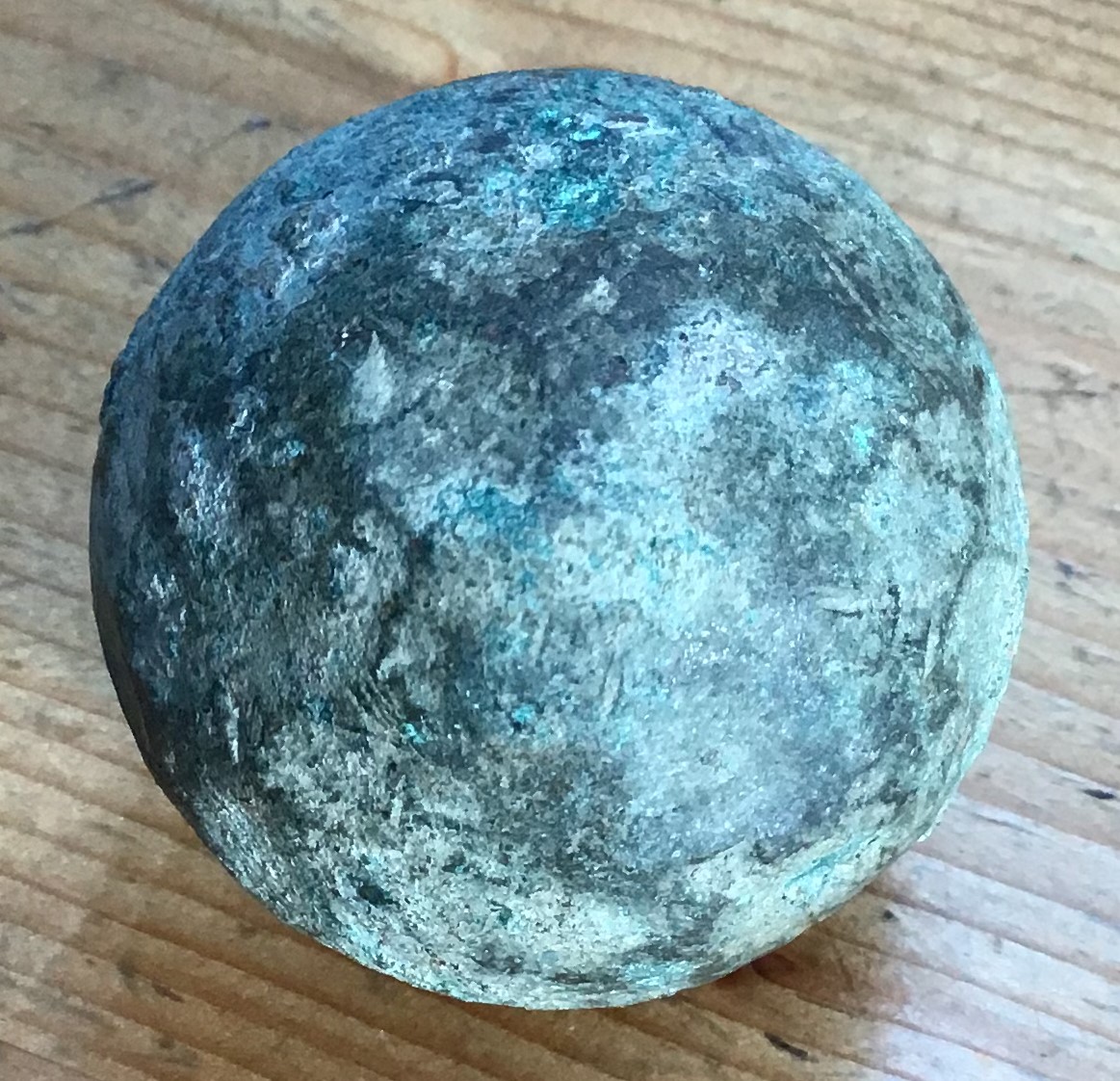 A recent visit by Lizzie Noyes to the garden of Derek and Sylvia Coupe in Badsey, resulted in a discussion about Civil War shot balls when Derek showed her a spherical object he had dug up.  Lizzie was pretty sure it dated back to before 1700, and was probably from the time of the Civil War.  Much fighting went on in Worcestershire during the English Civil War of 1642-1645.  In Worcestershire, the first and last battles of the war were fought and Evesham was besieged, so it is not too fanciful to think that it may date back to those days.

Derek Coupe takes up the story of finding the object:

Encouraged recently to report a find that we dug up in our garden, I am advised that it may be described as a “shot ball “.

Some 20 years ago, my wife and I were digging a trench just outside the original back door of our house, preparatory to laying foundations for a conservatory.  We dug up various stones, broken crockery, etc, but then came across a ball that looked rather more interesting.  It weighs 400 gm with a diameter of 4.5 cm and seems to be made of lead.  But, having calculated the density of the ball, I conclude that it is probably made of iron and not lead.

It was interesting at the time, but since then I’m afraid has just sat in a lonely fashion on a shelf.  We would be intrigued to hear of any ideas as to what this item is, what it was used for and how old it might be.

Peter Stewart, who has spent many years with a metal detector in Badsey, writes:

I am no expert on the civil war or weaponry used but this looks like a civil war shot ball to me and the measurements fits with those advertised for sale on the internet.

Over the years I have found a large number of lead shot in Badsey but never anything this large made of iron.  The following from the Portable Antiquities Scheme may be of interest.

Most of the cannon balls in the Mary Rose are of iron, and represent some of the earliest cast iron in Britain; a few are made from stone. Stone balls were still in use in small numbers up to the English Civil War (mid 17th century). The smallest artillery pieces might use lead shot, and there were also composite pieces, iron with a lead jacket or lead with stones.

Cast iron roundshot is rarely found on battlefields, even though records suggest that it was the normal long-range ammunition; cannon may have been so hard to transport that they only arrived after the battle was over. Siege warfare used cannon, as speed was of less importance. A major use of cannon was also aboard ship, where of course there would be no transport problems.

We may never know for certain, but it certainly seems highly probable that this was a shot ball dating back to the Civil War.

Lizzie Noyes was visiting friends in Evesham who showed her a shot ball they had found in their garden when they lived in Jamaica!  Lizzie borrowed the Badsey shot ball in order to compare it with the Jamaican one.  The Badsey one is on the left and the Jamaican one on the right. 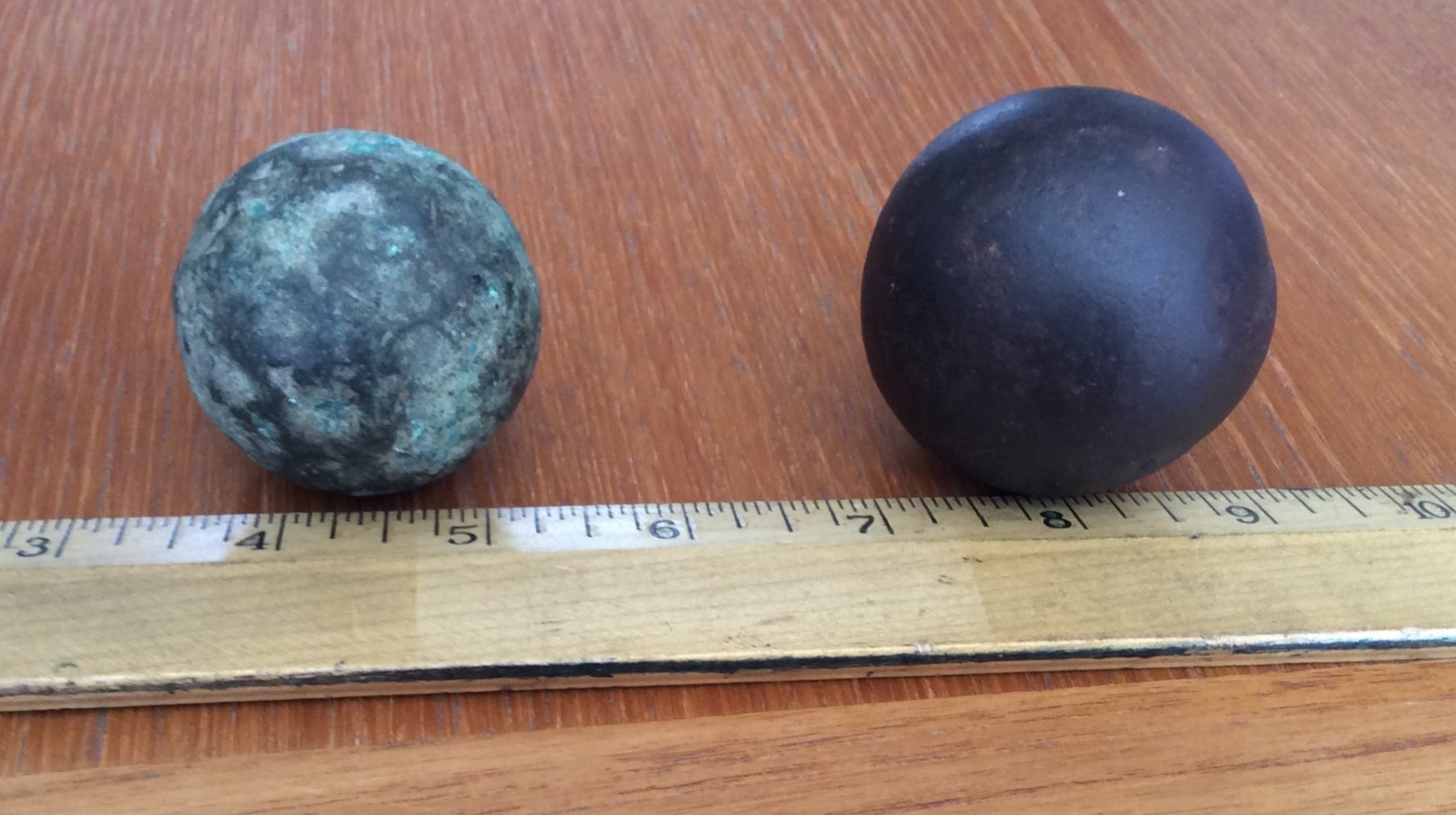