In 55 BC Julius Caesar, Proconsul of Gaul landed in Britain with two legions, fought some skirmishes and then left the island. He returned in 54 BC with five legions and 2000 cavalry and went as far north as the Thames, which he crossed after defeating a coalition of British tribes. He again returned to Gaul and it was around 100 years before the Romans returned, in 43 AD. In that year the Emperor Claudius supervised a military campaign aiming at a permanent conquest. Over the next six years much of the country was occupied and Colchester was made the first provincial capital. At this time the Fosse Way, a road from Exeter to Lincoln, marked the frontier of the Roman province. The extension of the Roman occupation continued for a number of years, with the military fortresses being built at Caerleon in South Wales and Chester in 74 AD and the eventual building of Hadrian’s Wall starting in 122 AD.

Roman roads in the general area

The Fosse Way was, in the early years of Roman occupation, the boundary between Civil government to the south-east and Military government to the north-west. The area where Wickhamford now stands is about 20 miles to the West of the line of this road. Another Roman road, Icknield Street (also known as Ryknild Street), ran from the Fosse Way at Bourton-on-the-Water in a northerly direction to Templeborough in Yorkshire. It goes via Alcester, Studley, Redditch, Birmingham, Lichfield and Derby, passing close to Wickhamford at Honeybourne. There it now crosses the railway line at the station and is known locally as Buckle Street.

Commercial traffic in Roman Britain would also have made use of the navigable rivers. In our area, along the River Severn there were Roman settlements at Gloucester, Tewkesbury and Worcester.

A Roman road through Wickhamford?

What is of local interest is the line of a road connecting the settlement on the Severn at Tewkesbury and Icknield Street at Honeybourne. This road left Tewkesbury and went in a north-easterly direction through Beckford towards the Hinton crossroads on the present A46. It then headed toward Wickhamford along today's bridle path from Hinton to the village. Today this reaches the A44 near the entrance to Field Farm. Its original alignment across what are today the fields of Wickham Farm takes it to where Manor Road has its junction with Manor Close. It then follows the route of Manor Close and continues along the bridle path to emerge on the Badsey/Willersey Road at the spot known as ‘Frances Grave’. It followed the Willersey Road for short while to Pear Tree Corner and then went straight on, as what is now another bridle path, passing ‘Allen’s Barn’ and out onto the Bretforton/Weston-sub-Edge Road (B4035). It crossed this to follow the present road to Cow Honeybourne and then met Icknield Street. Although debatable, it is possible that this is the route of a minor Roman Road. Also, the remains of a well-built track, possibly of Roman origin, went from this road the short distance to where Wickhamford Mill stands today.

Evidence of the Roman occupation

After nearly four centuries of Roman occupation, the legions were finally withdrawn back to Gaul in 410 AD. Evidence of the presence of the Romans across the country is widespread and diverse. It takes the form of extant structures such as Hadrian’s Wall, or excavated buildings like Chedworth Villa, near Cirencester, and the remains in central Gloucester. Artefacts are found in hoards or scattered across the fields in the form of pottery, bricks, roof tiles and tesserae of mosaic floors or metal objects such as coins, keys, ornaments, nails and pins.

1. An archaeological excavation was carried out in the 1967 in the field between the old and new Evesham to Broadway road through the parish. This is very close to the road described above. A number of trenches were dug in the northern-western part of this pear-drop shaped field, on the Evesham side of Badsey Brook (see Appendix). This is exactly where the route of the Roman road crosses this field. In one trench, some fragments of painted wall plaster and sherds of coarse red and black pottery were found, which dated from the third and fourth centuries AD. In another area the remains of what was thought to be a corn drier were found – two walls of a flue. The finds at the end of the excavation were classified as –

Pottery – sherds of red, black and grey ware were common, plus some Samian ware sherds and one lid of ‘Malvern-type’ pottery.

Bone objects – two complete bone pins (and three fragments of pins), a bone cylinder with faint incised line at each end. General fragments of bones and teeth of sheep and pig.

Metal – seventeen assorted nails, one bronze fibula and one saucer brooch of a type said to quite rare in this country.

2. In another part of the village nearer to the Church the landowner collected finds scattered across one field over a number of years. These he passed on to Peter Stewart for his collection. The material consisted of –

3. The Almonry Museum in Evesham has a small collection of Roman material found in Wickhamford, including some of the artefacts found in the 1960s excavation. Those not mentioned already are –

Metal objects – a saucer brooch, a bronze fish hook, a child’s bronze bracelet and a pair of bronze tweezers.

4. Older O.S. maps show that Roman remains were found at some date in a field next to the road to Murcot, on the southern boundary of the parish, but no details are known.

5. When road-works took place in 1957-58 to make the present stretch of the A44 near the Sandys Arms a considerable quantity of limestone walling and Roman pottery was discovered but no detailed records were kept nor any archaeological examination made.

6. Some Roman finds were made in the small field known as Hop Yard, next to Nos 5 and 6 Longdon Hill, but details are not known.

Illustrations of some of the Roman finds in Wickhamford

Items located in the Almonry Museum, Evesham are shown the footnote ‘AM’. 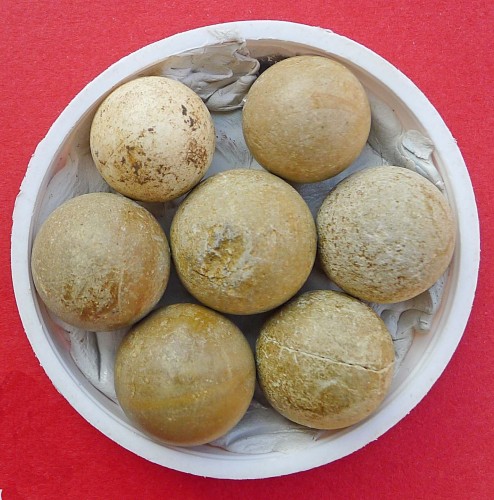 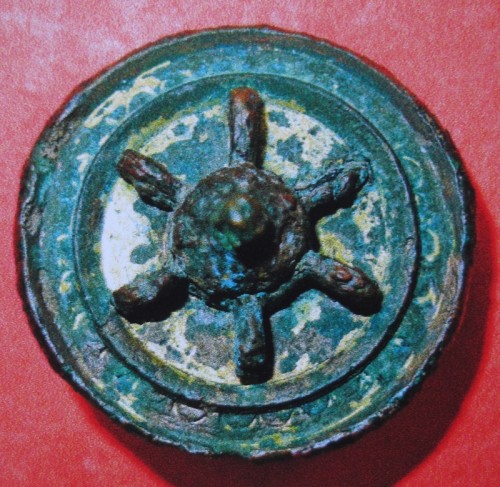 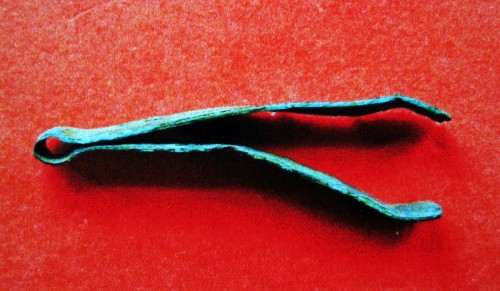 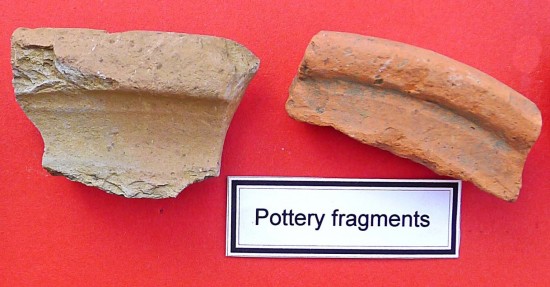 There is no doubt that Romans or Romano-Britons lived within the bounds of present day Wickhamford. This village and adjacent Badsey have been the source of many and varied finds. The occupation in the area seems to centre along the river terraces, especially along the margins of Badsey Brook. Here, in freshly ploughed soil, scatterings of building stone, tiles and pottery can be readily observed. Evesham itself has little in the way of Roman connections, which emphasises the significance of the road that passed through the village.

Appendix – Site plan of one of the trenches dug in the archaeological excavation in 1967.

Thanks are due to Peter Stewart who supplied the photographs for this article.