Creation of the Archive

Since the formation of The Badsey Society in 2002, we have, over the years, begun acquiring items and documents for the nucleus of a small museum and archive collection. As with many things, it began in a small, haphazard way, but is now beginning to grow “like Topsy”. With the absence of a physical museum and archive to store our growing collection, we have created a virtual one on this website. 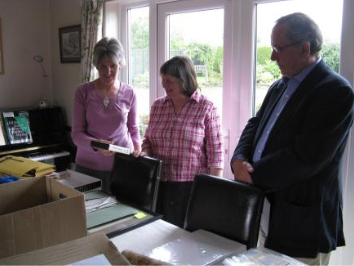 Shortly after receiving the Heritage Lottery Fund grant, we met with our newly-appointed mentor, Michael Diamond, in August 2010 to talk about cataloguing and storing our collection. He also introduced us to Moira Buick, a paper conservator, who gave advice about storage materials, and also agreed to restore some of our more damaged items.

At Michael’s suggestion, we visited other organisations. One such was Chedham’s Yard, www.chedhamsyard.org.uk. Archives Manager, Jane Neill, contacted Heather Cox, the Chairman of the project, and five Badsey Society Committee members visited on 16th October 2010. Chedham’s Yard is an early 19th century blacksmith’s and wheelwright’s workshop in the village of Wellesbourne, Warwickshire, run by seven generations of the Chedham family, the last of whom, Bill Chedham, still lives in the village. Restoration work was being undertaken in a warehouse outside the village but the items have now been returned to the yard which is open to the public. The work of restoring, photographing and cataloguing each item, undertaken by a dedicated team of volunteers, was inspirational, and gave us much food for thought. The project won the BBC Restoration Village in 2006.

Michael then arranged for us to visit Worcester Porcelain Museum in order to learn about their online catalogue. Archives Manager, Jane Neill, takes up the story:

On Wednesday, December 15th 2010, Maureen Spinks and Jane Neill drove over to Worcester to the Royal Worcester Porcelain Museum to meet up with Wendy Cook, the Curator and Michael Diamond, the Badsey Society Archive mentor. Maureen picked me up in Aldington Village on a cold day. We have had to cancel the meeting twice due to (A) bad weather and (B) a computer problem, so third time lucky.

We had a straightforward journey parking beside the Museum around 1.15p.m. We had a delayed wait for Wendy. It gave us the chance to look around the sales area of the museum. Michael arrived a little later. Michael is a regular visitor to the Museum as he is the Archive mentor here too. It was at his suggestion that we arranged the visit to Worcester. Wendy Cook came to greet us and apologised for being delayed.

Wendy took us over into the office where all the records are stored in a large collection of folders kept on the shelves. We were primarily interested in hear about the Access Database on which all the archive records are kept and how they are made accessible to the public on the Web network. (www.worcesterporcelainmuseum.org.uk/collections)

We settled down at the large table. Wendy went through the enormity of her task when the factory closed and the new building, to house the artefacts, was opened. It has been a long time in the doing but they are beginning to catch up with the recording, photographing and cataloguing of their vast collection. It is always changing with new items coming in or old ones to be returned to their owners if they were on loan and are no longer required.

We looked through the forms used to register new artefacts, the folders cataloguing the artefacts etc. We talked of the difficulties of deciding what was appropriate or not. Much of the work of data entry is done with voluntary help that needs organising and supervising. We are not professionals and we rely entirely on voluntary help and good will. It will need thought and planning to make our work run smoothly. Like the Chedham’s Yard Project, they have had to adapt to their individual needs. Wendy was extremely generous in giving us forms etc. to use as a guide for our project. Michael was patient in listening and answering our queries as they arose in the conversation.

Finally we looked at the set-up of the database on her computer. Michael made us a cup of tea while we looked at it. Wendy was in demand from her staff as she was very generous with her time. It was past 4 o’clock and we felt we had taken up more than our fair share of her time. We gathered up the papers we were given and the notes taken and said our “Goodbyes” and “Thank You” to both Wendy and Michael. We made our way out to the car in the bitter wind and drizzle feeling we had received a warm reception and an open and informative session. Maureen and I came away with a far greater understanding of the task ahead.

Having done our fact-finding, the hard work of cataloguing and photography started in earnest early in 2011. Will Phillips was appointed website designer, Peter Stewart took charge of the photography, and Maureen Spinks began organising volunteers with updating Excel spreadsheets.

Meanwhile, it was time to get our tool collection organised - we had a growing collection of tools which had been donated to the Society but, until now, we have not had the time to record, photograph and identify all the items. The back garden of 30 Horsebridge Avenue was a hub of activity on the morning of Friday 1st July 2011 when some members of The Badsey Society gathered together to have a “tools day”.

In June 2012, we were ready to begin boxing up some of the documents which had been photographed and catalogued. We purchased strong boxes from Quantum Print & Packaging, based at Willenhall in the West Midlands. The decision to buy from this company was made because this is the firm which Worcestershire Record Office uses for their archive, and the boxes have always seemed to be very satisfactory – a simple design, but extremely sturdy and fit for purpose. Barbara Jerram kindly offered us storage in her attic until such time as we can find a permanent home; the tools continue to reside in the Dallimores’ shed.

Final preparations have taken place during the autumn of 2012. The website will be launched at a special event at Badsey First School on Saturday 1st December 2012. The launch will be accompanied by a talk entitled, “A History of Badsey in 100 Objects”, showcasing some of the items in the archive.