Badsey's mass dial: the largest in the world?

Mass dials, or scratch dials, are primitive types of sun dials used to show the approximate time of day. They date from the mediaeval (1100-1600) period, and are found on the south walls of churches. They were usually near the main door or the priest door at about four to five feet above the ground. Due to rebuilding, mass dials can end up almost anywhere on a church, even the north wall. They are frequently found inside a later added porch over the south door. St James’ Church, Badsey, has one of the largest dials discovered.

The following article, entitled, East of Evesham, by Tony Wood, appeared in the British Sundial Society Bulletin, Volume 17 (ii), June 2005. We are grateful to Tony Jerram for making us aware of the mass dial’s existence and to Chris Smith for drawing our attention to the article. In particular, we would like to thank the author of the article, Tony Wood, for granting permission for an extract from the article to be reproduced here. Further information about mass dials may be viewed at www.sundialsoc.org.uk.

“ In Worcestershire’s market garden region lies the village of Badsey. It might be that the church of St James there has the largest mass dial "in the world"; "yet discovered" if we are being cautious. Its size can be gauged from the photograph where on tiptoe and outstretched arms just span its diameter. Mass dials do vary in size and a few large ones occur in Gloucestershire at Leckhampton, Kemble and Westbury-on-Severn (800 mm, 620 mm and 305 mm respectively) with another large one not too far away in Oxfordshire at Shirburn (600 mm). (Shirburn is probably a Saxon dial however.)

The usual observation that such dials were carved at chest height no longer applies to Badsey’s 1100 mm version on the south wall of the tower. It is now rather faint, so much so that some members of the Church Council were unaware of its existence and must have walked past it weekly. As far as its position within the canon of mass dials is concerned, it is almost unique in size. A date of "later", say 16th century, might be guessed at owing to the presence of the numbers within the two circles outlining the dial. The Roman numerals are evenly spaced at 15 degree intervals; together with the circular layout, we are firmly in the mass dial tradition. There is a suspicion that some attempt may have been made to install a sloping gnomon but the original gnomon was probably horizontal.

The situation of the dial is such that it is shadowed after around 4.30 pm in summer by the tower south-west buttress and the morning sunlight is also obstructed. Even with the sun round to the west as far as it would go to give decent shadow contrast the numerals are by no means obvious...” [see photograph below]

Since writing the article, Tony Wood adds, "The only thing further to note is the realisation that larger mass dials seem to be confined to this part of the world. As mass dials occur countrywide and we now have around 4000 examples recorded this local variation is of interest but as usual the reasons remain a mystery." 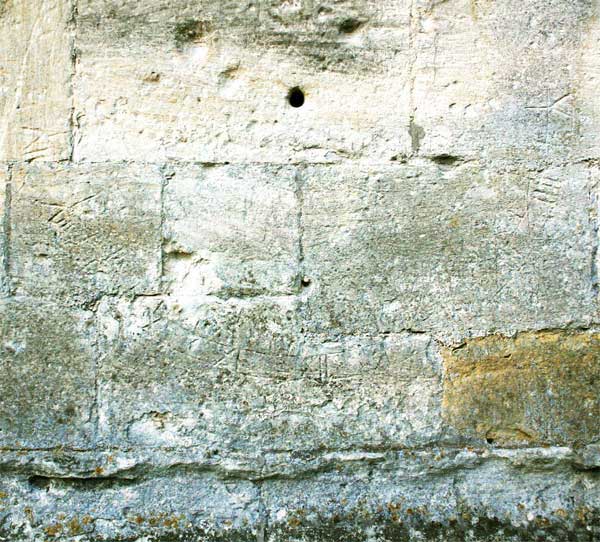 Few people notice the mass dial at Badsey until it is pointed out to them. The faint markings make it difficult to photograph. The picture here gives some idea of what remains.

The hole once held the horizontal gnomon which was probably no more than a stick that cast the shadow. Two complete circles have been scratched into the stone with this hole at the centre. Between these circles are roman numbers for the hours. XII (twelve o'clock) is at the bottom.

Some mass dials have extra markings to show the time of the church services but these are not visible at Badsey.

A horizontal gnomon makes a sundial very inaccurate with the length of the hours changing throughout the year. An accurate sundial must have a gnomon that points towards the North Star, making it parallel with the axis of the earth.

It is not certain how a mass dial like this was used. It would have given a crude local time that perhaps was all that was needed. It was most accurate around midday. If the service was about this time, a bell ringer might have used the dial to know when to summon the congregation.

See also photographs of the church and churchyard. 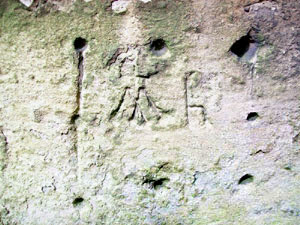 Valerie Magan noticed these initials carved in one of the stones, just to the right of the mass dial, tucked in the corner of the south porch. They appear to be 'Mh'.

Peter Stewart reported: 'I have carried out a small evacuation of the area below the inscription and found some metal fragments including a nice 6" rose head chisel ended nail some four or more inches below the surface, nothing deeper. The nail would make a nice conversation piece and probably dates from the 19th century. I can make no comment on the other metal pieces which need examining more closely but believed to be old guttering of sorts. There were also lots of small sharp pieces of sheet copper on and just below the surface around the area, also washers. All signs of building work."

We are not certain what the marks mean or whether they have any connection with the mass dial. Here are some suggestions which we offer without comment.

(With thanks to Valerie Magan, Lizzie Noyes, Will Dallimore and Peter Stewart.) 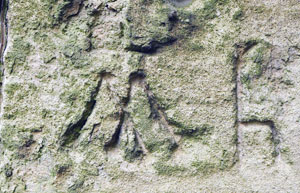