In the tower of St John the Baptist Church, Wickhamford hangs a single bell, for calling parishoners to services, and it bears the inscription :- 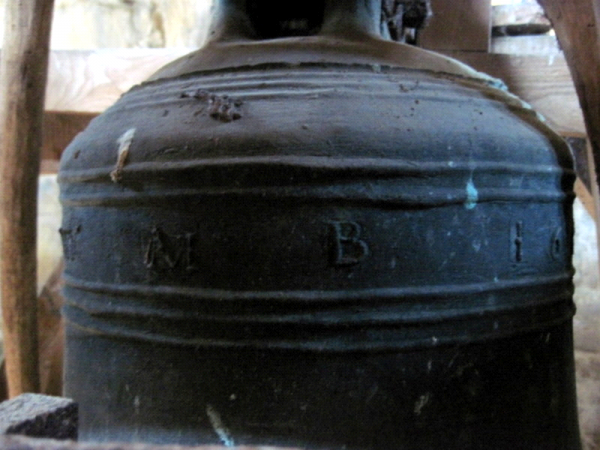 Thomas Akers was the Wickhamford Churchwarden in 1686, a few years after the tower was completed (1678), and also in 1693 and 1696. The ‘MB’ refers to the founder of the bell and his name was Matthew Bagley who, for a few years from 1686, had a foundry in Evesham. This is the story of Matthew, the Bagley foundry and bell making in Evesham before and after his time.

The Bagley Bell Foundry in Evesham

Matthew Bagley was born in Chacombe, Northamptonshire in around 1653. He was the son of Henry Bagley and Matthew came from a family of very skilled bell makers and many of their bells are still rung today. Matthew and his brothers, Henry junior and William, learned the trade of bell making from their father, who already had a thriving foundry in Chacombe, close to the church in Silver Street. After his father retired in about 1679 Matthew and Henry junior were in partnership at Chacombe until 1686. Although they probably cast the bells together they frequently placed their separate names on the bells. Some have the inscription ‘Matthew Bagley made mee’, as is the case with the 2nd and 3rd bell at Ombersley, and similar inscriptions appear for Henry.

In Kempsey church there are 6 bells. Five were made in 1686, almost certainly by the Bagley brothers, as the third bell bears the inscription ‘Matthew Bagley made mee 1686’, and the fourth bell ‘Henricus Bagley me fecit 1686.’ Many bells were made during the partnership and were hung all over central England.

Around 1686 Matthew Bagley moved to Evesham and this may have been a branch of the Chacombe business as he was still working with Henry junior and William at Chacombe whilst he operated the Evesham foundry. He must have thought there were good prospects for bell founding in the area and the bell at Wickhamford may have been one of his first commissions after moving to the town.

In 1664 the bells from All Saints, Evesham were removed and Matthew’s father,Henry Bagley had cast three bells for the Bell Tower from their metal., Therefore, Evesham and the surrounding area would not have been unfamiliar territory to Matthew. In 1682 Matthew and Henry Bagley junior had made four bells for Ombersley Church. At that time Ombersley Court and Wickhamford Manor were both owned by the Sandys family so maybe Matthew Bagley was commissioned to make the Wickhamford bell in 1686 because of his connection with Ombersley four years earlier.

Other bells known to have been cast by Matthew Bagley whilst in Evesham are:-

Matthew Bagley’s time in Evesham was quite short as he died on 11th June 1690. He was buried in the North Aisle of St Lawrence’s Church, Evesham, on the 12th June 1690, where the tomb of ‘Matthew Bagley bell founder’ was recorded on page 319 of H. B. Walters book ‘The Church Bells of Worcestershire’ (published in 1930).

The churchwardens’ presentment for Bishampton, dated 3rd October 1690, gave the reason why the parish had been unable to comply with the Bishop’s order that their broken bell should be recast. The bells had been ‘taken down to be run and made more Tunable’ but they were ‘still att the furnace unfinished, by reason of the sudden and unexpected Death of the Belfounder who undertooke the worke’. The Bellfounder concerned was Matthew Bagley, and his brother William, who was now running the business at Chacombe, came and completed the job and hung the five bells. A bell at Aston Somerville, dated 1690, was made by William Bagley and this also may have been a job in hand at the Evesham foundry at the time of Matthew’s death.

Matthew Bagley died intestate and the administration of the estate of ‘Matthew Bagley late of Chacombe in the County of Northampton’ was granted by the prerogative Court of Canterbury in January 1691 to his brothers Henry and William, his sisters Hester Hawten, Mary Thomas, Sarah Penn and mother Mary Bagley. That he is described as ‘of Chacombe’ and not ‘of Evesham’ may indicate that the Evesham foundry was probably only a branch of the Chacombe business and Matthew still considered his home to be at Chacombe, where his mother and other members of the family still lived.

Later Bell making in Evesham and the location of the Foundry

In the early 1700’s there were two founders working in Evesham, William Clark and Michael Bushell. It is believed they took over Matthew Bagley’s foundry, but where was this foundry?

In ‘A Short Account of the History and Antiquities of Evesham’ written by Edward Rudge, published in 1820, there is the following passage:-

‘In AD 1711, John Rudge, esq. demised, granted , set and to farm let, to Francis Rogers, all that barn, called the Bell Barn, then in the occupation of William Clarke, bellfounder; and also all that Abbey Gatehouse and way through the same, adjoining to the south end of the said barn; and also that parcel of ground, whereon the said barn and gatehouse called High Lead, then stood, for the term of two hundred years, at and under the yearly rent of three pounds five shillings’.

According to Edward Rudge, shortly after taking over the premises, Francis Rogers pulled down the barn and gatehouse and built a house in their place. The Bell Barn was situated on the right hand side of what is now the entrance to the two churches from Vine Street and where the entrance to Abbey Mews is situated. The Abbey Gatehouse adjoined Bell Barn. The proximity of Vine Street to the river would have made the transporting of the raw materials, i.e. metal, to the site fairly easy and presumably the clay to make the moulds was sourced locally.

‘Clark & Bushell’ of Evesham cast five bells for Hinton on the Green in 1705 and in 1707 four bells each for churches in Henley in Arden and Newbold Pacey. ‘William Clark of Evesham’ made a bell for Offenham church in 1705 and six bells for St James Church, Badsey in 1706.

In 1706 it was decided to update the five bells in Badsey church, as according to the Church Wardens accounts from 1525 onwards, they were often in need of repair, and Clark and Bushell were commissioned to do the work. The five bells would have been removed and taken to the foundry in Vine Street. They were then smelted and made into 6 bells.

Three of the bells have interesting inscriptions. One gives the names of the churchwardens at the time the bells were cast - Robert Pigeon, Thomas Byrd and Thomas Dudley (see below). 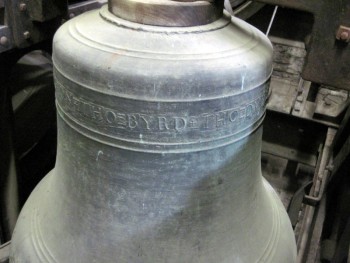 Another bell has the initials M B which relate to Michael Bushell, who apparently married William Clark’s daughter.

The largest bell and the tenor has the most interesting inscription known as a Chronogram, whereby the largest letters are read as Roman Numerals. In this example they add up to the year of casting - 1706.

It translates as follows:-

‘The watchful care of Robert Hill Vicar here changed us into SIX Wm Clarke did the work by his own skill’.

These six bells are still rung to this day and have a preservation order on them. In 1897 a new cast iron frame was installed by Taylor’s of Loughborough leaving room for two more bells. Two trebles were cast by Meer and Stainbank and added in 1902.

‘Michael Bushell of Evesham’ cast four bells for Pebworth in 1707. There is no further trace of bells being cast by them after this date and in view of the fact that the foundry was demolished shortly after, in 1711, it probably brought to an end bell making in Evesham.

Thanks are due to David Bagley and Chris Pickford for providing the information on the Bagley family.

Thanks are also due to John and Hilary Bolton for providing information on the Badsey bells and for allowing access to the tower and the Bell chamber.

Peter Stewart supplied the picture of Badsey bells in the churchyard in 1951.

Other material was gathered from various internet sites.

(The main part of this article was first produced for the Evesham Historical Society under the title ‘MATTHEW BAGLEY BELL FOUNDER of EVESHAM’ and has been edited for use on the Badsey Society web-site.