The Rev. Charles Gepp, Vicar of Wickhamford from 1887 until 1897 was much concerned with the poor state of repair of the Church of St John the Baptist. In 1893 the roof of the Nave was completely restore externally, the porch was thoroughly repaired and the churchyard was enlarged and surrounded with a substantial iron fence.  Repairs were also done to the Chancel and new iron spouting was provided where necessary. In 1895 a severe gale on 24th March caused some damage, which was made good. In 1896 the whole of the inside of the roof was plastered with good hair mortar. Rev. Gepp was able to claim that when he left he had not left any debts for his successor but that the tower was still in need of repair. The work undertaken had cost £118.

In 1899, Rev. Gepp’s successor, the Rev. William Price, proposed to undertake more repair work and opened an account at Lloyds Bank, Evesham to receive subscriptions.   A Bazaar was held on 16th July in aid of the fund and on 13th April Mrs Savory, Mrs Wilding and Mr Sladden arranged a dramatic entertainment in Mr Sladden’s barn. There were two performances, at 3 p.m. and 7.30 p.m. where a comedy entitled ‘One of you must marry’ and a farce entitled ‘Sunset, by Jerome K. Jerome, were performed.   Tickets sold at 2/-, 1/- and 6d for the afternoon performance and for 1/6, 1/- and 6d in the evening.

The Parish Magazine of July 1899 gave a long report on the Church, which was in a very bad state of repair.  Sir Arthur Blomfield, A.R.A., had examined the Church and produced a report.  The considered that the roof needed to be attended to without  delay as it was far from watertight.  Until it was stripped off there was no way of  knowing how much renewal or repair to the timbers was going to be necessary. It  would then have to be covered with boarding, felt and battens and the existing stone  slates re-used. The half-bay of oak panelled ceiling formerly covering the Rood loft  should be carefully preserved and repaired. Sir Arthur did not suggest any alteration to the pew arrangement, reading desk, pulpit etc. but to preserve the fine oak carving of the pews and the royal coat of arms. 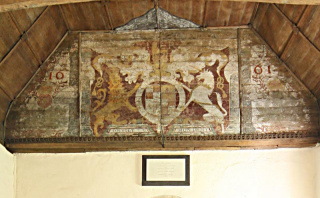 Outside the Church, his report said that much work needed to be done.  The roof of the Tower rested on a shallow stone gutter without proper supports or sufficient outlets, so that in wet weather the rain poured down the inside of the tower walls into the Church, forming large pools of water on the floor.  This was a defect in need of urgent repair.  He also called attention to the base of the Church where he considered it important to lower the ground level and form an open brick or cement channel below the floor level of the Church floor.   This should be properly drained to the nearest watercourse and new guttering and rain water pipes provided.   At this time the soil level, particularly around the Chancel, was so high that water ran through the Chancel door or sank into the Church foundations. His report went on to comment of the state of the glazing, which required thorough overhaul and repair. The saddle bars and casements needed to be attended to at the same time.

The Parish Magazine of October 1899 reported that a faculty had been granted for the restoration of Wickhamford Church and that work would begin as soon as sufficient money was in hand. A Sale of Work for the fund was held at the Old School, Badsey, on 17th October with many fancy and useful articles for sale. By May 1900, the Parish Magazine sadly reported that Sir Arthur Blomfield had died suddenly. Shortly afterwards, the builder, Mr Collins of Tewkesbury, who had carried out much of the repair work in the Church to date had also died. Money was accumulating in the Lloyds Bank account, but much more was still needed, although the Worcester Diocesan Church Building Society had promised a grant of £31 towards the work.

A meeting of the Committee overseeing the work was held on 25th September 1900 when it had been agreed to cover the cost of the work to the sum of £340, including architects fees. Restoration work finally began on 8th October, after some unavoidable delays and the firm of Collins and Godfrey under the supervision of Sir Arthur Blomfield’s son, Mr J. C. Blomfield, carried out the work.  At that time there was around £200in the bank or promised. A letter to the Vicar was received from the Bishop of the Diocese, giving permission to close the Church during the restoration. Fund-raising continued with a Rummage Sale in the Old School, Badsey, on the afternoon of 16th October, where teas were provided.

In October the roof of the Nave was removed and restored with oak boards laid behind the rafters. Where rotted wood was found good stout oak was substituted and the roof was felted and the stone tiles re-laid.  The excavation of the soil around the Church was undertaken and a new channel constructed to drain away surface water. Work was due to halt temporarily at this point but an anonymous donation of £30 allowed work to be carried out on the roof of the Tower. More funds needed to be raised at this point to cover the cost of pointing the outside walls.  At this stage work had not started on the Church interior. Donations continued to flow into the fund, including £5 from the Lord Bishop of Worcester, £3 3s from Mrs J. Idiens (of the Manor) and £10 1s from the proceeds of a Sale of Work. This was held on 19th October and was deemed an unqualified success; Mrs Warner supervised the refreshment stall and was assisted by Mrs Walters, Mrs Hartwell and Mrs Wilson.

The Parish Magazine of February 1901 was able to report that a portion of the work on repairing the Church was completed. The tasks done by then were –

Also, the main door was re-cased with oak inside and repaired.  Numerous nails, accumulated over the years by notices nailed to the door, were removed. To prevent this re-occurring, two notice boards were put up in the porch.

The bill for all of the work was expected to exceed £400 and at that time around £100 had still to be raised.  The Church was reopened for services on Sunday 3rd February 1901 with Holy Communion at 8 a.m. and Evensong and Sermon at 3 p.m.   Later there was a formal reopening on 19th February when the Bishop of Coventry came to preach at 8 a.m.  At 3 p.m. a special service of reopening was held, which was conducted by the Rural Dean, Rev. F.A. Morgan, and the Vicar.  There was a large congregation and the Bishop preached a sermon from the text – 1 chronicles, xxix, 18. Members of Badsey Choir and some ladies augmented the Choir.  In the absence of the Organist due to a serious illness in his family, Rev. C.O. Bartlett, Vicar of Willersey, accompanied the service.  Collections throughout the day added £5 8s 4d to the restoration fund.

During the restoration a number of interesting discoveries were made.  The ancient mediaeval picture of the Virgin Mary and Our Saviour was uncovered on the Chancel wall. 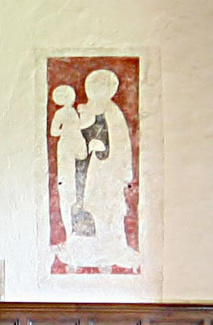 An inscription was found in the only bell in the Tower – “Thomas Akers, C.W., M.B., 1686”. Thomas Akers was probably a Churchwarden at this date.  On the stone battlements at the top of the Tower (south side) there was an inscription in an oval border – William White, Richard Clarke, Churchwardens, 1678”. (The names were said to be not quite certain, but that White and Clarke were Churchwardens at that time).  In the Parish Magazine, thanks were given to Mr C.A. Binyon for taking rubbings of the inscriptions and other useful work in connection with the ancient records of the parishes.

The architect, Mr C.J. Blomfield visited the Church after the work was completed and expressed his satisfaction, although the heating system was not working properly at that point.  The builder had promised to rectify this shortly.  The restoration was still  not complete as the pointing work on the upper part of the Tower had still to be done and the glazing in some of the windows still needed attention as it was in very bad state.

More details can be seen of the progress of the Church restoration work, and the fund-raising to pay for it,  in the section of the Badsey Archive web-site on Parish Magazines.