Francis Thistle (1836-1909) was born on 7th December 1836 in Flitcham, Norfolk, the third of nine children of Bullen and Elizabeth Thistle; Bullen was a labourer.

Francis began work as a blacksmith.  On 24th September 1860, Francis married Pleasance Grimes at Upper Sapey, Herefordshire.  At the time of the 1861 census, Francis and Pleasance were living with Pleasance’s parents, Osborn and Phebe Grimes at Heighley, Whitbourne, where Osborn was a Gardener.  The Grimes family was from Norfolk, so Francis may well have met his future bride in his native Norfolk.

Francis and Pleasance had two sons and three daughters:  William Medler (1862-1940), Emily (1865-?), Oswald (1871-1871), Myra (1872-1897) and Alice (c1878-?).  William was born at Whitbourne.  By the time of Emily’s birth, they were living at Ombersley.  Some time between 1865 and early 1871 the Thistle family moved from Ombersley to Badsey where Francis took on the role of blacksmith.  The blacksmith’s forge was in a building which is now known as Greystones (current-day No 10A High Street), which was converted to residential accommodation in the latter part of the 20th century.  The house next-door (the current-day Hollywood Villa, No 10 High Street) was available to rent.  At the time of the 1871 census, both Francis’ and Pleasance’s mother were staying with them to help with the new-born baby (unnamed on the census, but later baptized Oswald).  Baby Oswald lived for only nine weeks and was buried at Badsey on 17th June 1871.

In 1873, the family decided to seek their fortune in America, as Francis’ landlady, Mrs Elizabeth Appelbee, was advertising in The Evesham Journal for a new tenant.

Shipping records reveal that they arrived in the United States on 16th October 1873 on the ship Liberty, having boarded at Key West or Havana.  They settled in the state of Kansas.

Another daughter, Alice, was born in about 1877 in Louisiana.  At the time of the 1880 census in America, they were living at Osage Township in the county of Allen, state of Kansas.  Francis, and his eldest son, William, were both employed as Blacksmiths.  By the time of the 1885 Kansas State census, Francis and Patience and their three daughters were living in Louisiana, Kansas, Francis still employed as a blacksmith.

Pleasance died in February 1908.  Francis died a year and a half later on 13th October 1909 at Cushing, Payne County, Oklahoma.  He was buried at New Zion Cemetery. 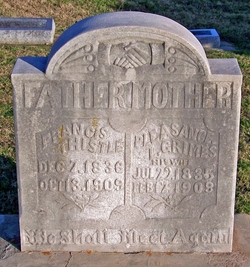