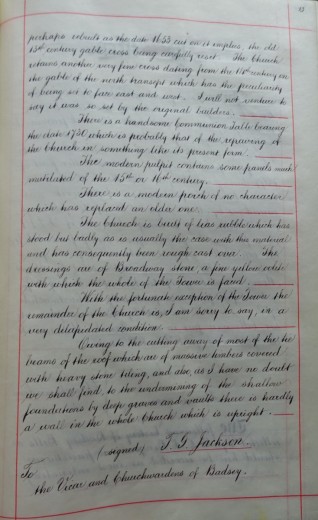 … perhaps rebuilt as the date 1653 cut on it implies, the old 13th century gable cross being carefully reset.  The church retains another very fine cross dating from the 14th century on the gable of the north transept which has the peculiarity of being set to face east and west.  I will not venture to say it was so set by the original builders.

There is a handsome Communion Table bearing the date 1730 which is probably that of the repairing of the church in something like its present form.

The modern pulpit contains some panels much mutilated of the 15th or 16th century.

There is a modern porch of no character which has replaced an older one.

The church is built of lias rubble which has stood but badly as is usually the case with this material and has consequently been rough cast over.  The dressings are of Broadway stone, a fine yellow oolite with which the whole of the tower is faced.

With the fortunate exception of the tower, the remainder of the church is, I am sorry to say, in a very dilapidated condition.

Owing to the cutting away of most of the tie beams of the roof which are of massive timbers covered with heavy stone tiling, and also, as I have no doubt we shall find, to the undermining of the shallow foundations by deep graves and vaults there is hardly a wall in the whole church which is upright.

To the Vicar and Churchwardens of Badsey