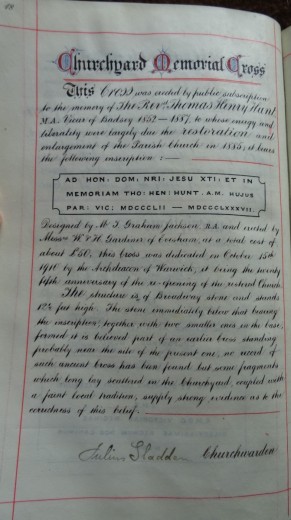 This cross was erected by public subscription to the memory of the Revd Thomas Henry Hunt, MA, Vicar of Badsey 1852-1887, to whose energy and liberality were largely due the restoration and enlargement of the Parish Church in 1885; it bears the following inscription:

Designed by Mr T Graham Jackson, RA, and erected by Messrs W & H Gardiner of Evesham, at a total cost of about £50, this cross was dedicated on October 15th 1910 by the Archdeacon of Warwick, it being the twenty-fifth anniversary of the re-opening of the restored church.

The structure is of Broadway stone and stands 12½ feet high.  The stone immediately below that bearing the inscription, together with two smaller ones in the base, formed it is believed part of an earlier cross standing probably near the side of the present one; no record of such ancient cross has been found but some fragments which long lay scattered in the churchyard, coupled with a faint local tradition, supply strong evidence as to the correctness of this belief.