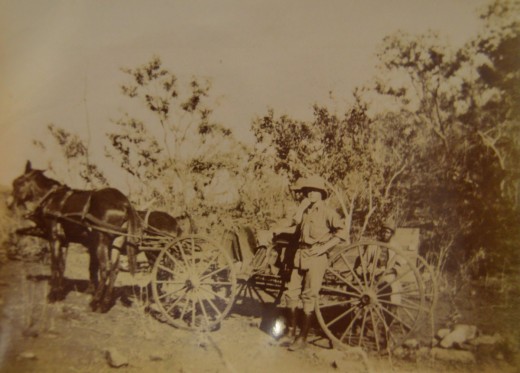 In anticipation of the winter and of the fighting it would bring, the 13th Division (which included the 9th Worcesters) were drawn back from the front to training camp at Amara.  The city of Amara (in the south-east of modern-day Iraq) had been captured by the British in 1915 and was now a major hospital, rest and training area.

This series of photos are in a photo album, the first one being captioned, "Water-wheel near the Officer's Mess at Amara". The photos were taken by Cyril Sladden’s colleague, Lieutenant Norman Ainsworth.  As Cyril said in a letter of 28th August 1917 to his fiancée, Mela Brown Constable:  “I have got a few old snapshots that Ainsworth was good enough to give me.  He used to be in my company in Amara days.  He bore a sort of charmed life all through the winter and spring, and only got an insignificant scratch in the last show we were in although he was in the thick of almost any scrap we had.  He has a most interesting collection. These I am enclosing are not of special outside interest but may amuse you a little so I send them now instead of burying them in my base kit.  Keep them safe for me somewhere.  I hope I may get a few more later on, one or two of some slight historical interest in connection with the campaign.”

Football in the desert

A convenient form of transport