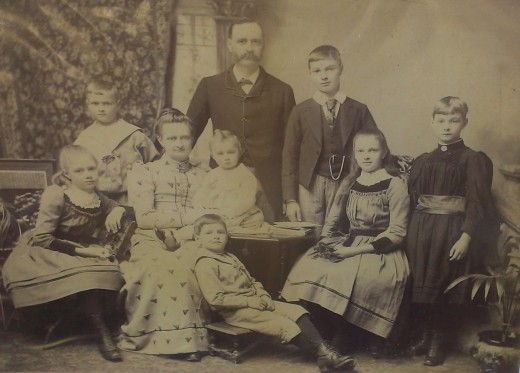 Sladden family group taken in a photographer’s studio in Malvern in 1892.  Julius and Eugénie Sladden are pictured with their seven children (Juliet had not yet been born).

We are grateful to Ruth Burn (née Sladden) for providing a copy of this photograph.

We have recently heard of an amusing story in relation to this photo, in which Cyril Sladden, speaking in 1973 (17:48 into Side 2), recalls his brother, George being tiresome:

My earliest memory is the occasion when the family group photograph was taken in Malvern when I was, I believe, two years old.  I don’t remember anything of the journey but I do remember one incident during the photography and that was that George, who was sitting on a stool at mother’s feet, just below me because I was on her lap, was, as he was apt to be at that age, obstreperous – he wanted to put his feet right out forward as far as possible and the photographer, knowing that they would be enormously enlarged, wanted him to tuck them under him.  George won because everybody knew that if any particular emphatic action was taken he would have made such a scene that no photograph would ever have been taken.  So in the photograph his feet do come out rather large – I think he probably compromised a little, and pulled them in a very little.  But I do remember the argument.  And I know it is a correct memory because I stored it in my mind for many years – of course the photograph hanging on the wall kept my memory alive.   And I remembered this fracas, and years afterwards I asked somebody, I don’t know who in the family, whether it was a correct memory was correct, that he had been tiresome.  And they said it was, he had been tiresome.  So I’m quite sure it was a genuine memory.  I also remember one other thing about that and that was my bitter disappointment at leaving the photographer’s shop without being shown the photograph.  I’ve no doubt I was comforted that it would be shown it later on, but that wasn’t what I wanted.