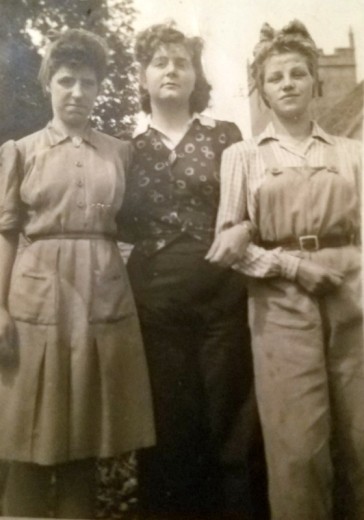 The first photo shows the girls with Wickhamford Church in the background;  Violet Fletcher, the Forewoman, is in the centre.

The second shows three girls on a night out - Irene Seymour (centre), Kitty Wright ( left) and 'Gladys' - surname unknown- (right).  Only the first names of the girls is on the back of the photo.

The last photo is thought to be of the wedding of a Land Army girl who was at Wickhamford Manor during the war.  She has been identified as Anne Hammond who married Thomas Bennett. Anne came from Newcastle and the wedding took place in N.E. England in 1946. Irene Seymour is in the centre of the guard of honour on the left of the photo.  Pat Clark is on the far right.

With grateful thanks to Jo Lawrence (daughter of Irene Seymour) for providing these photographs and Joan Galloway for helping with the identification of some of the girls. 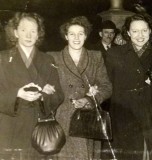