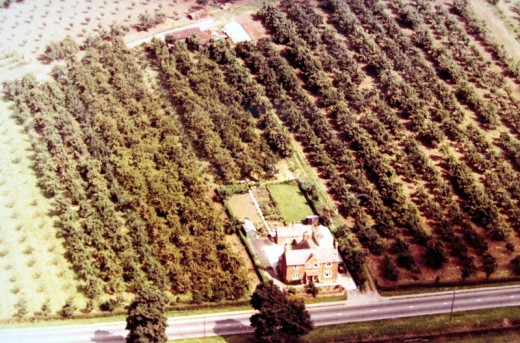 Here are two aerial photos from the early 1960s of Longdon Hill, before the dual carriageway was built on the A44. The houses are 1 & 2 Longdon Hill. The small brick buildings at the rear were very common in that era of property and and a few still remain in the village. They consisted of a wash house at the front; at the side, a coal house and toilet consisting of a seat with a bucket underneath which had to be emptied, and at the rear a pig sty. Albert Harman came to live at 1 Longdon Hill, after his marriage in 1936, renting it at first and then purchasing the property at a later date. The two photos show the nursery to the north of the A44 (where the dual carriageway now ends).

The business was named J & A Harman after the owners Jim and Albert Harman. The nursery consisted of 15 acres of land and was rented from Christ Church College, Oxford, but around the mid 1940s the Harman brothers purchased the freehold. The first glasshouses were erected in 1956 and were from the Westdock Timber Co, Hull and were of the 'Dutch light structure'. Other blocks of glass were added over the years. The plum crops were mainly Czar, Purple Egg, Victoria and Herons. The glasshouses were cropped with lettuce in the spring followed by tomatoes. On the open land a variety of crops were grown. Stick beans, cabbage, spring onions, and radish were grown in summer and, in winter, sprouts and leeks were gathered. In the spring and summer casual labour was employed to help gather the crops.

These pictures were kindly lent by Derek Harman.