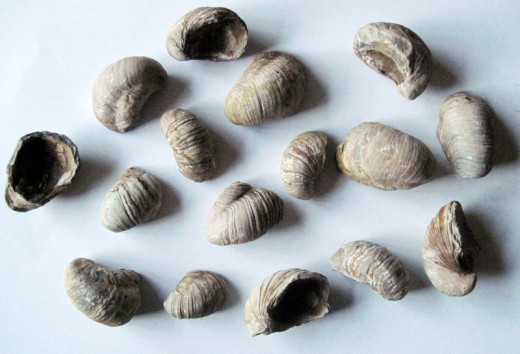 These creatures are amongst the oldest inhabitants of Wickhamford!

They lived in the area in the Jurassic period and are an extinct type of oyster, commonly called Devil's toenails, that can be found in the heavy clay soil in the area. The genus is Gryphaea. They lived here when the present parish was a shallow sea, living on the sea bed. The soft part of the animal occupied a cavity between two shells, one curved and one flat - examples of the curved type are shown in the picture. The shells show prominent growth bands.

For more on the geology of the area see Ian Gibson's article in Aldington and Badsey: Villages in the Vale.

This example was found complete with its smaller shell attached as one fossil.

The smaller shell was found separately to the larger one but fitted exactly. The small circular areas on each shell are where a muscle would have been attached that would close the two shells together.