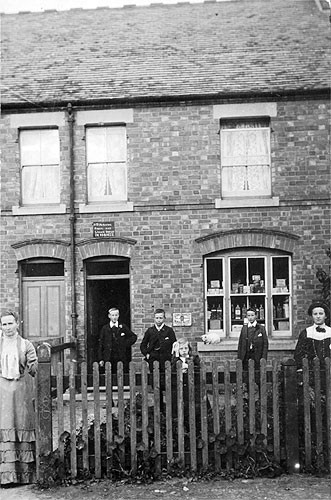 This charming photograph was loaned to us by Albert Godson of Chipping Campden. He visited Badsey recently to check the location of the house and to see if anyone could tell him about his forebears who are pictured here. After just a little bit of research, we were able to bring Albert's forebears to life. David Caswell, the village blacksmith, was able to confirm that the house in question is the present-day No 15 Chapel Street. The name over the door reveals that the shop proprietor was Mrs Hutchings. But who exactly was Mrs Hutchings and who were the children?

Sarah Jane Hutchings had been born Sarah Jane Knight in 1867, at Sharps Row, cottages on the site of the current-day Garden of Remembrance in the churchyard. She was the daughter of Richard and Jane Knight and came from a long line of Badsey Knights. She had married George Nations Hutchings, a Police Constable in the Metropolitan Police Force. They lived in Paddington, London, and had five children: Mary Georgina known as Polly (1889-1979), Henry George (1891-1952), Richard William known as Dick (1892-1973), Francis James (1893-1965) and Walter (1895-1901). Sadly, George died in 1896 at the age of 33 leaving Sarah with five children under the age of seven. Sarah decided to return to the village of her birth and remained there for the rest of her life. Yet more tragedy hit the family when Walter, the youngest in the family, died at the age of five.

The house pictured here was built in 1900, but Sarah and family did not live there initially. The house was first occupied by Sarah's widowed mother, Jane Knight, and a couple of her unmarried siblings. At the time of the 1901 census, Sarah and her three surviving sons were living in the cottage attached to the chapel (present-day No 7 Chapel Street). Sarah was described as a Market Gardener working on her own account at home; it is likely that Sarah also acted as Chapel Warden. Meanwhile, Polly was living in the Metropolitan & City Police Orphanage at Welleslery House, Hampton Road, Middlesex, along with around 200 other children.

Jane Knight died in December 1902 and it was probably then that Sarah Hutchings and family moved in to what is now No 15. At some point, Sarah decided to open a shop in the front room of the house. The photograph was most likely taken in 1906 when a whole series of photos of the village was produced and made into postcards by Royal Standard Photo Company of Evesham. Sarah Hutchings can be seen on the left, her eldest daughter Polly, returned from the Orphanage, is on the right, and the three surviving boys, Harry, Dick and Francis in the middle, little Walter having died a few years earlier. It is not known who the little girl at the front is.

The shop had ceased to exist by 1920 as 91-year-old Fred Roberts, who grew up in the cottage opposite (demolished 1950) and has an excellent memory, says that the only shop he can recall in that stretch of road was the one next door at No 13 which became a shop about 1920. It is most likely that that opened up after Hutchings' shop had closed.

Sarah Hutchings died in 1943. Polly, Harry and Francis never married and continued to live in the family home until their deaths. Dick Hutchings married Edith and lived at Synehurst. He, too, suffered tragedies in his life, with two little girls dying in infancy and his only surviving daughter, Pansy, dying at the age of 25. Polly Hutchings' death in 1979 at Avonside Hospital marked the end of the association with No 15 Chapel Street.

The article was written by Maureen Spinks.