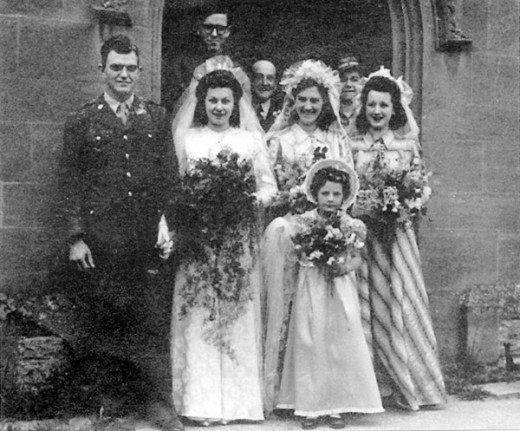 Many US servicemen met their wives on overseas service during WW2. This is the marriage of Private first class US Army, Tommy Earl Childers and Joan Mary Hall at St James Church, Badsey on Thursday 14th June 1945.

From the left, are the groom and bride, at the rear standing behind, Private Frank E Belcher US Army, the best man, to the right of bride is bridesmaid Elsie Mary Gould, next to her is Pauline Sorrell, the small bridesmaid is Marion Jelfs. Behind the bridesmaids are the bride's parents, William Charles Hall and Gladys Evelyn Hall. The vicar was Charles James, Vicar of Evesham.

After marrying, Tommy and Joan lived in the US, mostly in the southern states, making occasional visits back to Badsey. Their two daughters have also visited Badsey in the last few years.

This picture was kindly lent to us by Robert Hall.