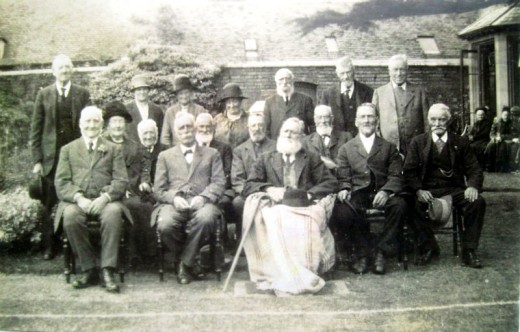 This is one of a pair of photographs taken on Tuesday 28th June 1927 at Seward House to mark the birthday of Sir Julius Sladden (1847-1928) whose 80th birthday had been on 25th June. Sir Julius, who is on the front row with a bow tie, owned a brewery and lived in Seward House. He died a year later in 1928. Also pictured is Edwin Knight (1844-1929), who celebrated his 83rd birthday on the same day as Sir Julius, and James Herbert (1847-1930), the Sladden family gardener, who celebrated his 80th birthday a day after Sir Julius.

The guests were elderly parishioners, all over the age of 70.  A newspaper article in The Evesham Journal gave a report of the happy event.

The first photo shows Sir Julius, Edwin Knight, James Herbert, ten other men and four women (with two women in the background, out of the picture. The picture is from the Margaret Amos collection and we are grateful to Maureen Pratt who lent it to us.

The second photo shows Sir Julius, Edwin Knight, James Herbert, Reverend Allsebrook, two other men and 11 women.  An inscription on the back says:  “To Mr Joseph Marshall from Sir Julius Sladden.  A remembrance of June 28 1927 at Seward House, Badsey.”