In 1904 the Christ College Cadet Corps underwent a revival under its new commander, Captain G Lance, who had just joined the staff.

Khaki uniforms were issued, a novelty derived from the recent war in South Africa.  Boer riflemen had found the old scarlet tunics an easy mark, and thus khaki became the colour of British service uniforms.

A school had to raise a contingent of about 25 in order to attend the summer camp; not an easy task for a school of 100 boys, as there was a lower age limit of 16, and all the party were volunteers.  However, it was accomplished with the help of at least one 15-year-old who was tall enough to pass for 16, and now sets down these notes derived solely from memory.  After 66 years a few minor inaccuracies may have crept in, but here are some of the main recollections.

We were packed into three bell tents in which we lived, slept and had our meals.  These were brought from the cookhouse in army cooking pots by our camp orderlies for the day.

We had an unlucky start, for it rained steadily for all of the first day.  Normal exercises had to be cancelled and we were damp and bored.

We were attached to the much larger Harrow School contingent to make a company.  There were eight companies to a battalion in those days.

It was not an Officers’ Training Corps camp, because the Territorial Army (of which the OTCs were a part) came into existence only a few years later.

We were camped at Farnborough and our exercises were carried out largely on the ground now occupied by the RAF aerodrome.  There were no aeroplanes then other than primitive experimental machines being contrived by the earliest pioneers in America.

After our first morning’s field training we were ordered to march back to camp independently by companies.  The Harrow boys were in front and set a hot pace.  They were on average older and bigger than we were, but we were determined not to be outmarched, and kept our formation intact for the couple of miles or so into camp.  At our hot pace we had outmarched most other companies and were rewarded by getting in to our tents just in time to avoid a heavy downpour.

It was some five years later that I talked about that march to an Old Harrovian (Colonel Sir George Codrington) whom I met when at Oxford.  He told me he was one of the front rank boys who set the pace for the company and that they had done it deliberately to see how the contingent from the little Welsh school would respond.  They decided that we had passed the test well, and our subsequent relations were put on a good footing.

Christ College found a further means of making its mark when an impromptu rugby football match was played between two battalions, Congreve’s and Gough’s.  Our commanding officer, Colonel Congreve, had made a name for himself as a young officer in the South African War.  He and Lord Roberts’ son (who was killed in the exploit) had both gained the VC at Colenso when they had led an effort to recapture some lost guns.  Colonel Gough was to become a notable figure when he commanded an army in France some dozen years later.

The Brecon contribution to Congreve’s XV was substantial; about five of them if I remember rightly.  Among them was our captain, George Llewellyn, younger brother of the captain of the Welsh XV at about that period.

Who won the match I have quite forgotten.  It did not matter much then, and certainly does not matter now.  But I do remember that our members of the team played a very conspicuous part in a lively match.

For the rest my memories are dim, and perhaps liable to be confused with those of an Oxford OTC camp held on the same ground six years later.  But I think it was the schools’ camp in 1905 that was visited by Lord Roberts, I can still see clearly in my mind that erect little grey-haired figure (then in his 70s) walking through our lines as we paraded outside our tents.  Perhaps at that time we scarcely understood what it was that moved him to show so much interest in us.  But we were to find out later that his vision of the future was only too clear; for ten years later we were in uniform again on much more serious and unpleasant business.

The experience was not repeated.  Never in subsequent years did we raise enough volunteers to send another party to camp.  But I like to think that living, as we did, pretty roughly in that camp was of help in preparing us for service later on when war came. 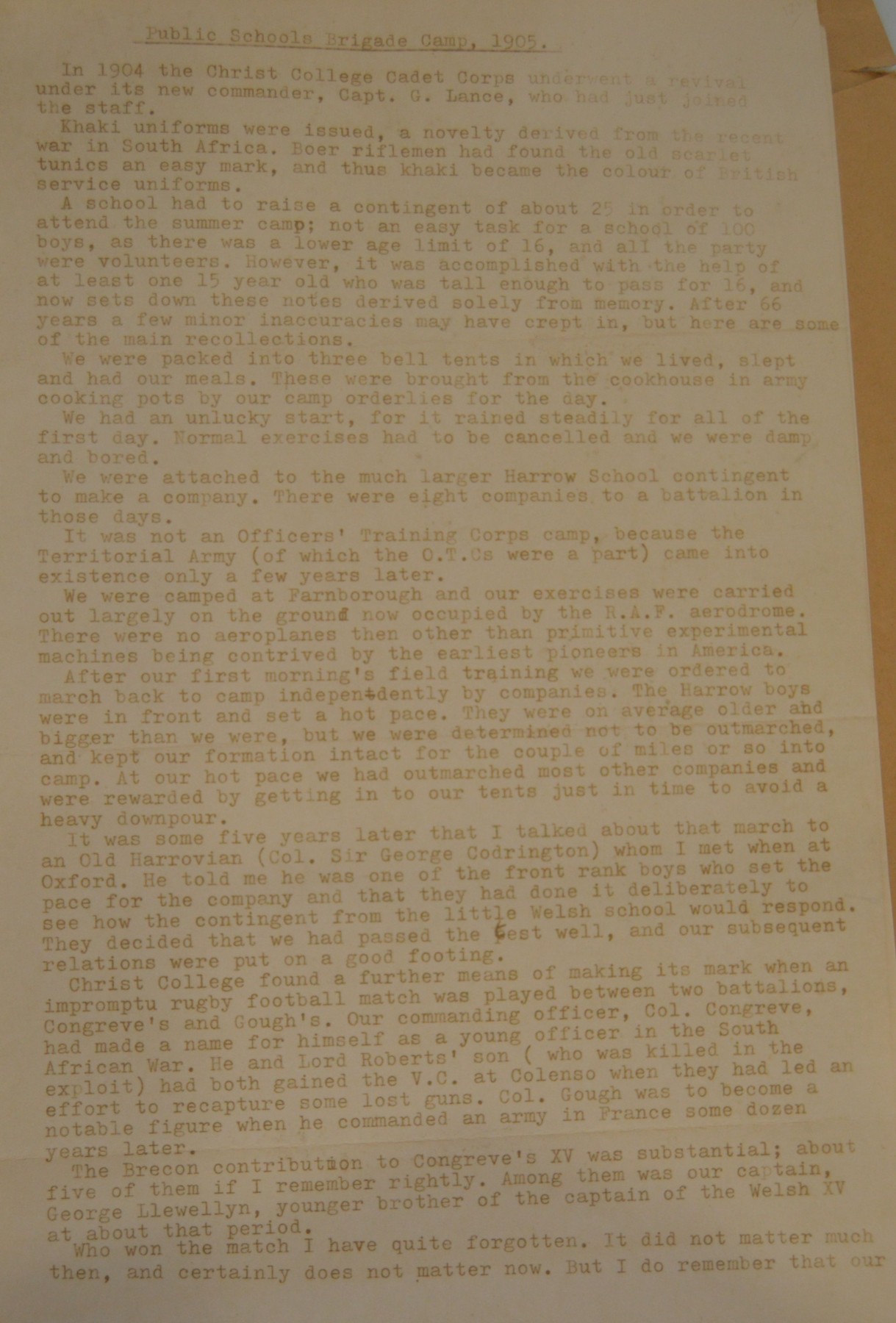 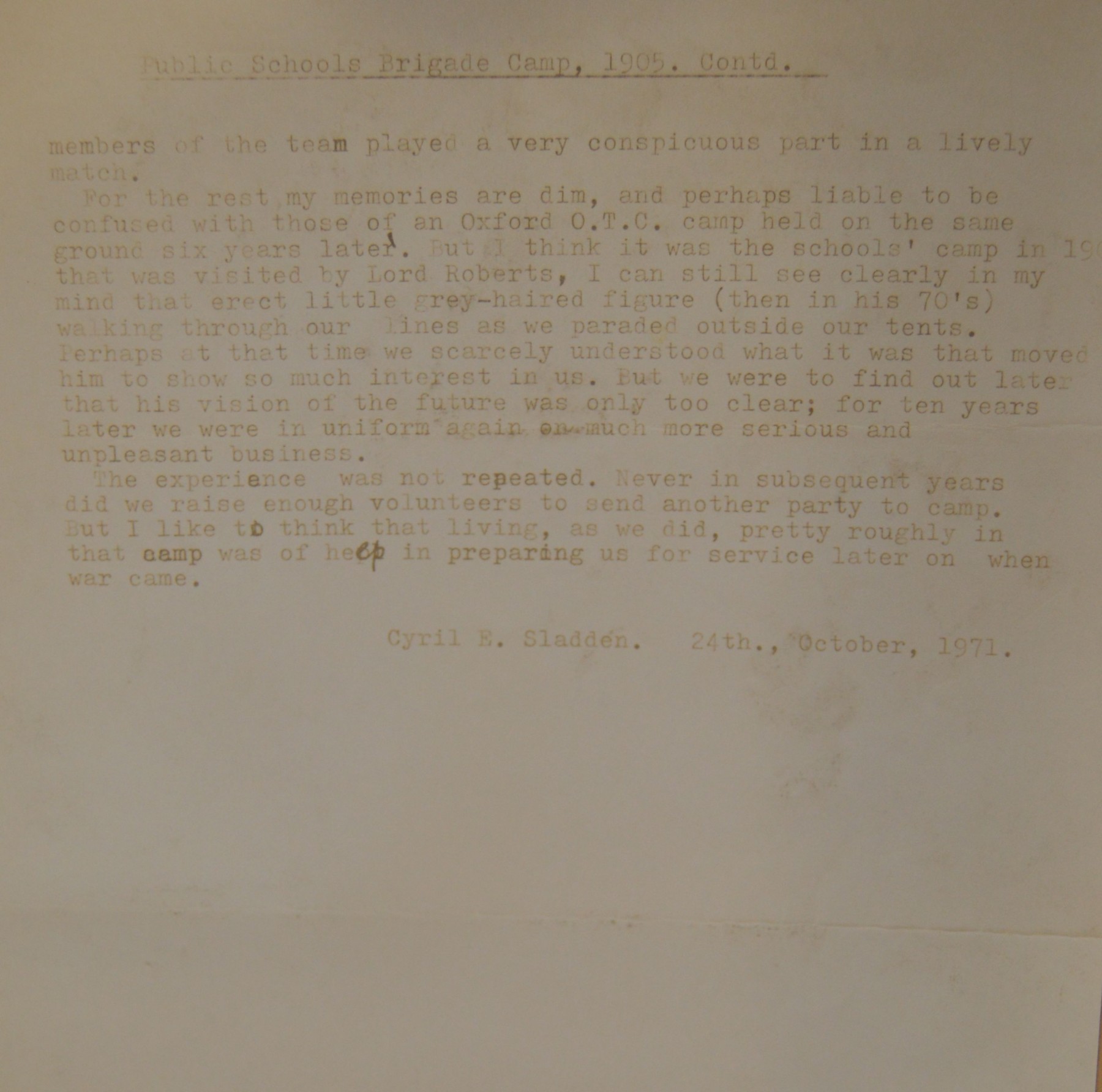 Copyright:  The Sladden family descendants and by kind permission of the Imperial War Museum.