An article written by Ian Major 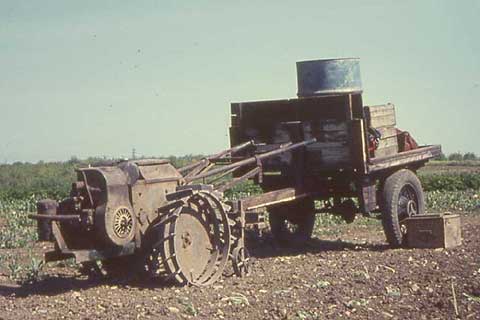 The 'Trusty' tractor was a common sight in and around Badsey from the 1940s to the early 1970s. The one in the photograph, owned by Wilfred Major, is shown standing on Blackminster Bank, coupled up to a trailer. Normally tools such as skim feet, scuffle feet, harrows etc, were attached to the tool bar. The depth of cultivation was controlled by two adjustable small wheels on this toolbar (one of which is visible immediately behind the main wheel). The toolbar could be removed and replaced by a single furrow plough. The long handles extending to the rear of the tractor both allowed the driver to walk clear of the tools and to give him extra leverage to lift the tools out of the ground. Between the handles were two levers used to disengage the drive to one or other of the main wheels. When some of the lighter tools were in use, a box containing stone was attached to the handles to counterbalance the weight of the engine. If a young child was to be entertained he/she would replace the stone in the box.

Power was supplied by a 5 horsepower JAP engine via a centrifugal clutch. The transmission was a combination of chain drive and reduction gearboxes.

'Trusty' tractors with 7 horsepower engines were also to be found. The extra power allowed the use of heavier reversible single furrow ploughs. They were also fitted with multi-speed gearboxes, including the luxury of reverse drive.

The trailer is an example of Market Gardeners' ability to re-use time expired items. It is constructed from several old doors mounted on a the back axle of a scrapped Vauxhall car (note the spoked wheels).

See also Digging for a Living: Market Gardening in Badsey and Aldington.