In the summer of 1941, 38-year-old Alfred William Sparrow, who lived on Brewers Lane, Badsey, with his wife and young sons, received three agricultural census forms for completion on 4th June.  Next to his address was WR/319 which was the code for the region; 30 which was the parish number for Badsey; and 176 which was the number of the farm/smallholding.

C47 was split into four sections.  Questions 1-34 concerned acreage of Crops and Grass.  Alfred Sparrow had ¼ acre main crop potatoes and 6 acres vegetables, totalling 6¼ acres.  He also indicated that he had ¾ acre other crops, but he did not include this in the total.  Questions 35-42 concerned labour employed on 4th June, questions 43-80 related to livestock and questions 81-89 related to horses.  Alfred Sparrow did not employ anyone to help him, he had no livestock and he did not have a horse. 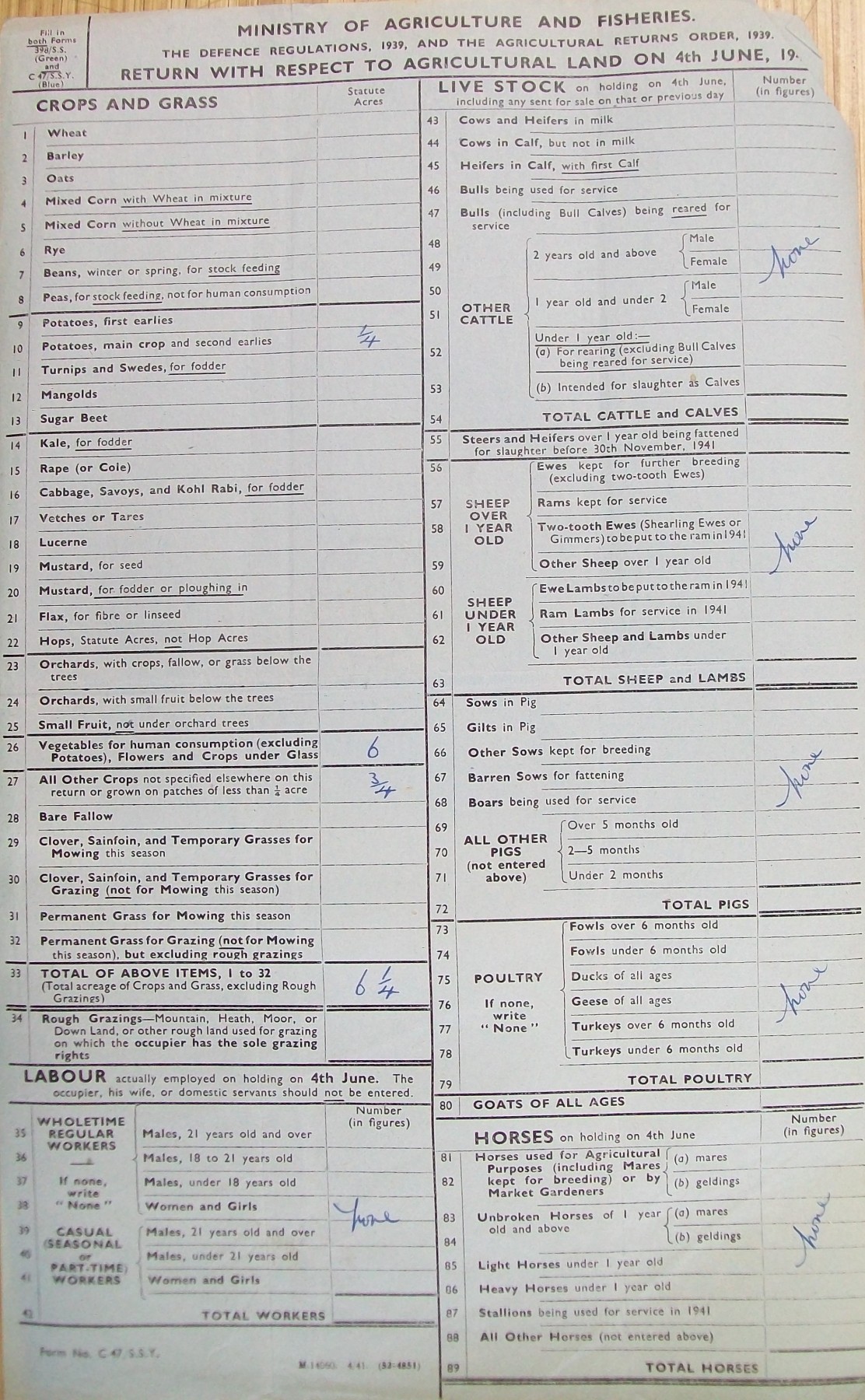 C51 was sent out at the same time as C47.  Whilst there was a space at the bottom for the name of the farm and name and address of occupier, this was nearly always left blank but, as there is a number, it is possible to link up with C47.

The form was split into three sections.  Questions 81-87 concerned acreage of small fruit, of which Alfred Sparrow had none.  Questions 88-115 concerned acreage of vegetables for human consumption, flowers and crops under glass.  In this category, Mr Sparrow had 1½ acres Brussels sprouts, ¼ acre cauliflowers, ¼ acre parsnips, ½ acre onions, ½ acre runner and French beans, ¼ acre peas for market, 1½ acres asparagus, ¼ acre bulb flowers other than tulips and daffodils and ¼ acre other flowers.  The final section, questions 125-126 concerned stocks of hay and straw on holding on 4th June, to which the answer was none. 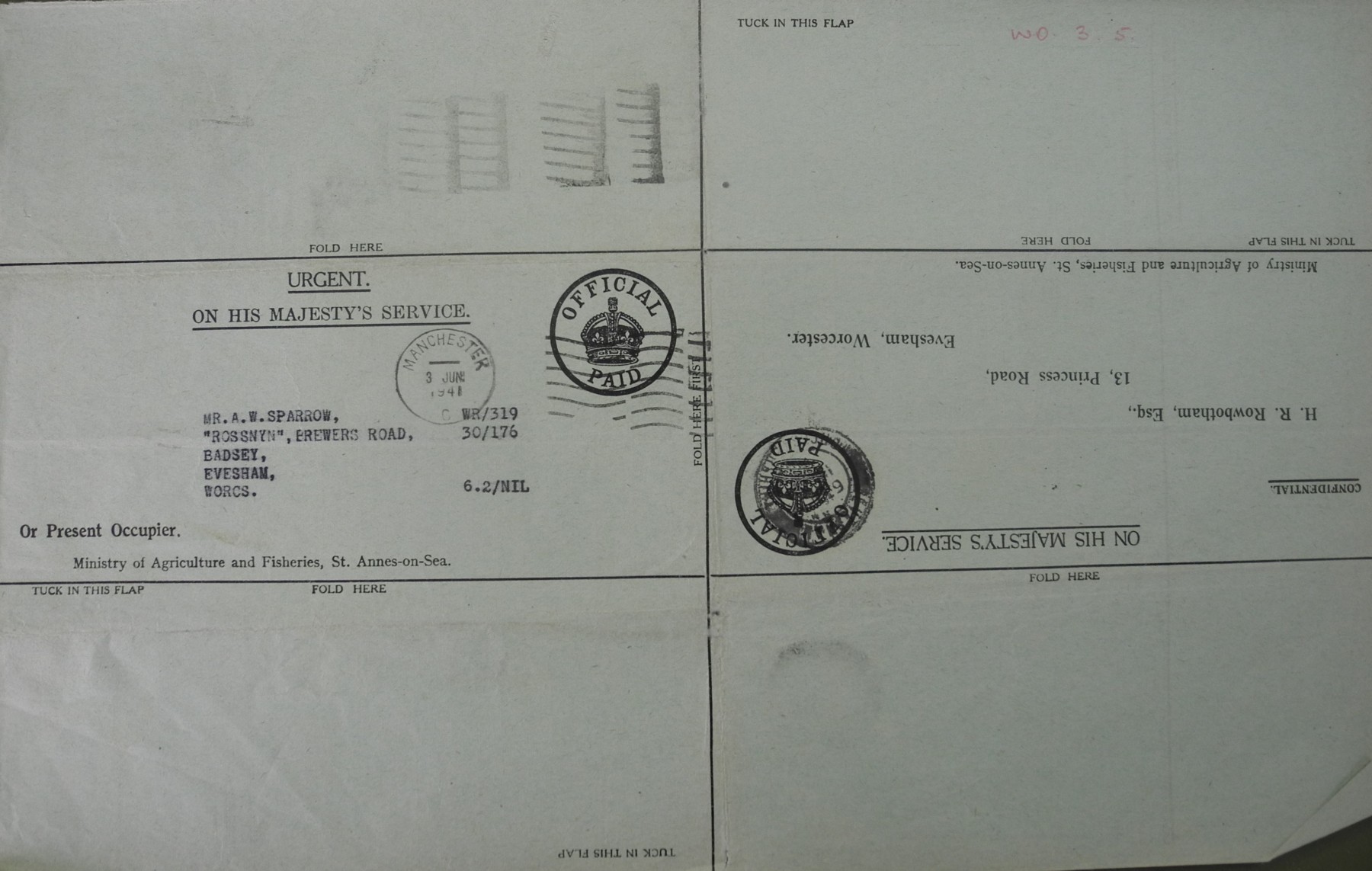 SF was sent out at the same time as C47 and C51 and asked for supplementary information.  Questions 129-132 related to labour and questions 133-142 related to motive power on the holding on 4th June.  Mr Sparrow did not employ any extra labour to help him and he had no motive power.  Questions 143-146 related to rent and questions 147-148 related to length of occupation of holding.  This form shows that Mr Sparrow was a tenant of 6¼ acres of land for which he paid a rent of £13 17s 10d.  He had been occupier of the holding for 11 years. 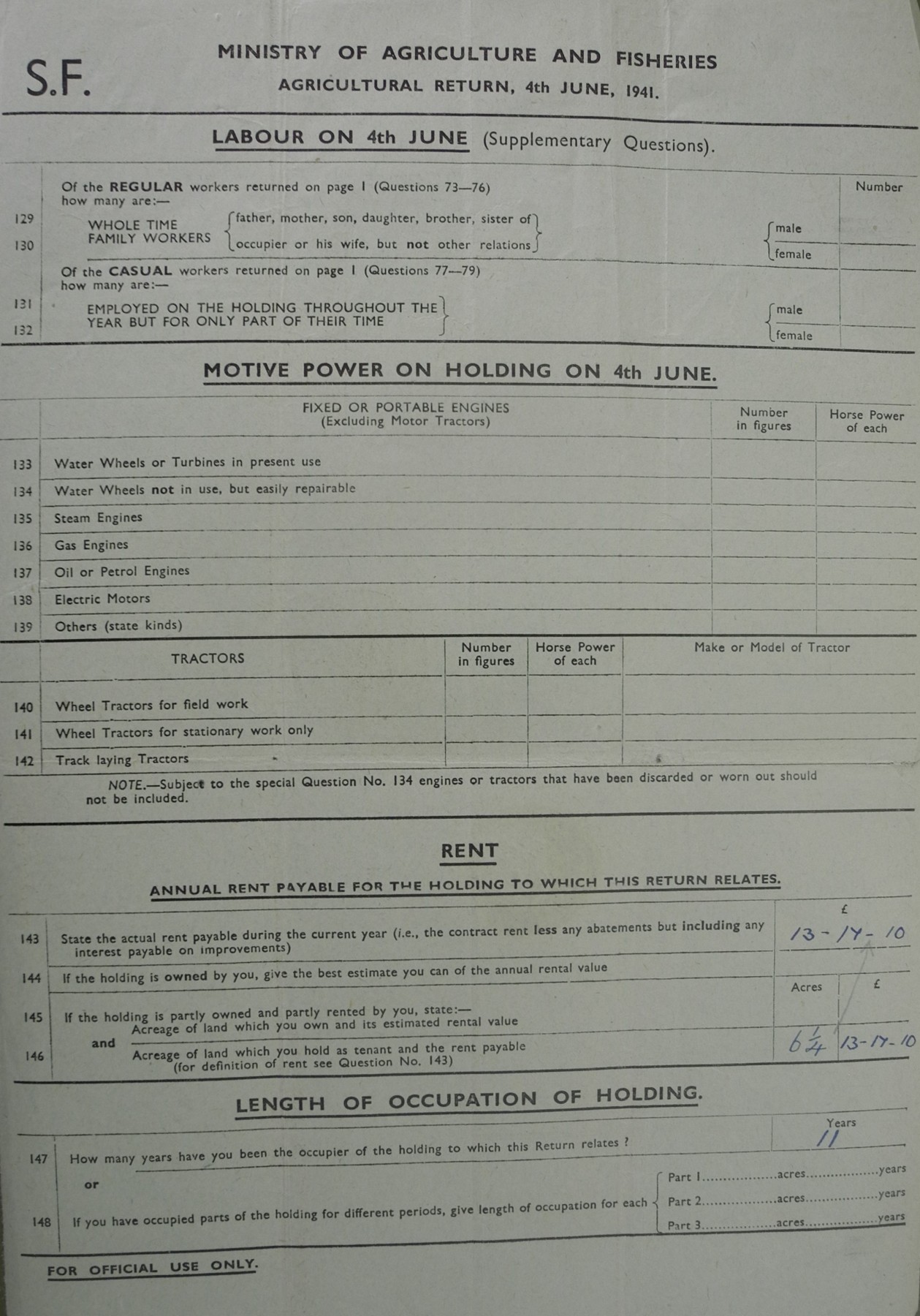 As Alfred Sparrow was market gardening on land in excess of 5 acres, his holding had to be inspected and Form B496 completed by the inspector.  Farmers were classified according to how well they were perceived to be managing the farm and its resources (A for good, B fairly well, C for poorly managed).  This classification system was unevenly applied throughout the country.  This new assessment of the farmer was a controversial part of the survey, and one for which it is often remembered.

The form was split into four sections.  Section A related to tenure and reveals that Alfred Sparrow was a full-time tenant farmer and that the owner was R C Sparrow (this should have read A C Sparrow, as the owner was his father, Alfred Cecil Sparrow).  Section B related to conditions of the farm.  The farm was judged to be 100% good with condition of farmhouse and field drainage also good.  The condition of buildings, farm roads, fences and ditches was fair, as was the situation in regard to road and railway.  It was moderately conveniently laid out, on soil which was 50% heavy and 50% medium.  There were no infestations of any kind and no derelict fields.  Section C related to water and electricity.  There was a piped water supply to the house and well and roof water supply for the buildings; there was an electricity supply for household purposes but not for farm purposes.  The final section, D, concerned management.  Overall, Mr Sparrow’s management of the farm was classified as A, with condition of arable land being good and adequate use of fertilisers.

The form was signed by the inspectors, J E Knight and R W Sidwell, who visited on 26th November 1942.  It was counter-signed six days later by P Brice on 2nd December 1942. 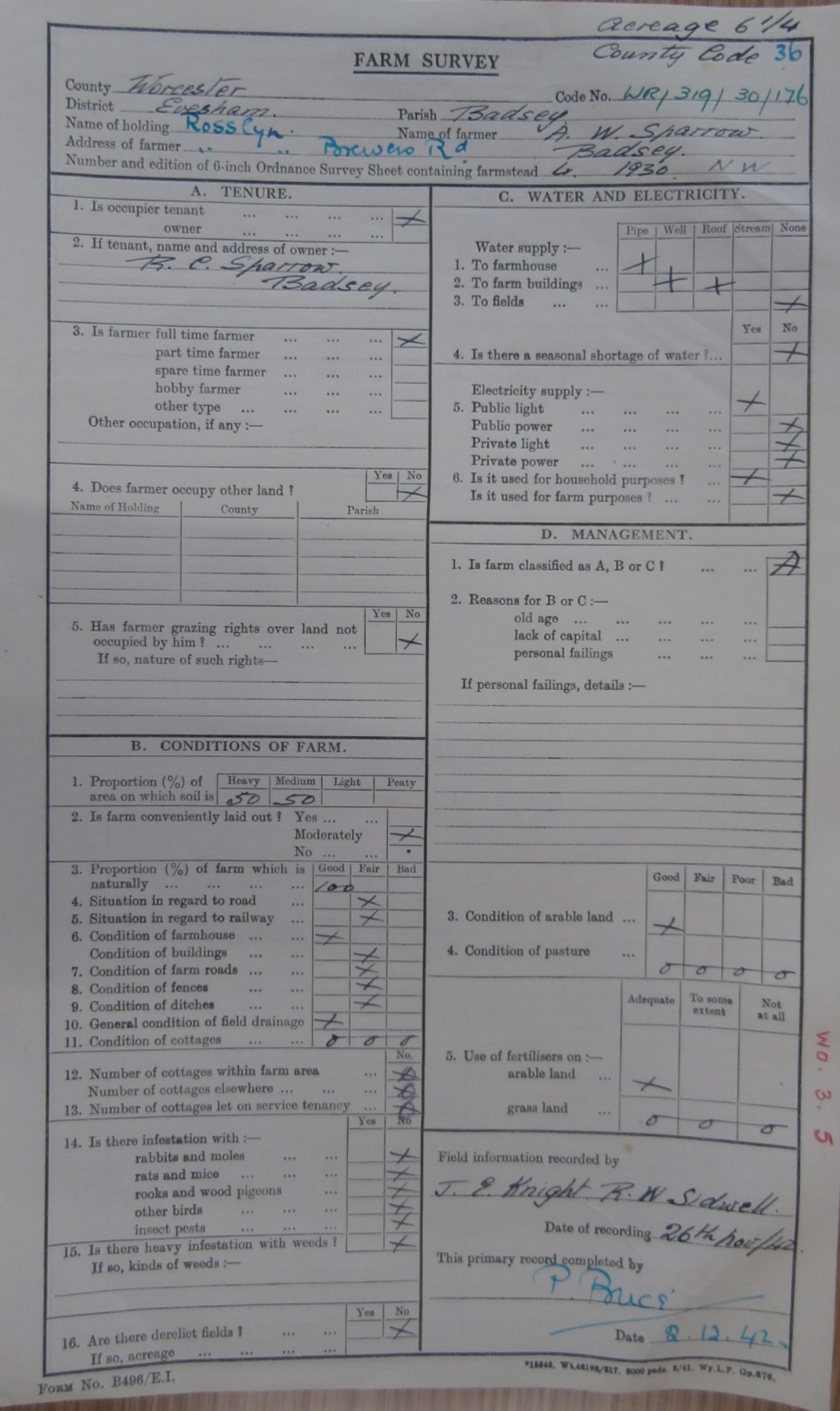