FRENCH SCOUTS AT BADSEY – Resistance Leaders among them

The strong bonds of friendship which already exist between Britain and France were further strengthened last week by the visit to Badsey of a party of French Scouts.  They were visiting the area as the guests of the 5th Evesham (1st Badsey) Group, who are in camp at Old Post Office Lane.

They came from Verdun and, known as Troupe Monjoy College Buvignier, are linked with the Badsey Troop through Scout Headquarters in London.

Their Scoutmaster, Jean Ducasse, is studying for a degree at Nancy University.  The three Assistant Scoutmasters are Jean Marie Gourgeaux, a teacher of languages at the College Buvignier; Roland Honenet, a PT instructor in the French Army; and B Singevin, who is also at college.

On Saturday afternoon Jean Ducasse opened the Badsey Scout Fete held on the Vicarage lawn, when he said, “We are very happy to be in England, especially with our brother Scouts in Badsey.  Next year we are looking forward to see them in Verdun, and I am sure they will be as happy over there.”

On Saturday evening, a Camp Fire was held at the French Camp which was opened by the District Scoutmaster, Mr B F P Blake.  A large crowd watched for an hour and a half as items were given by Scouts of both nationalities.  Guests of the evening were Mr R H New, the District Commissioner, Mr A H Ross, the Assistant District Commissioner, and the Vicar of Badsey, the Reverend W B Chapman.  Appropriately, the evening ended with the Marseillaise, God Save the King, and the Benediction.

Jean Claude Willim, one of the French Scouts, was amazed at the whiteness of English bread.  The weather, however, had not impressed him as being very favourable but the standard of Scouting was high and the warm welcome given to his party was very touching.  His father was on the chiefs of the Resistance movement and with others was responsible for destroying German camps during the occupation.  M Jean Gourgeaux was also a chief in the Resistance movement, and was wounded in action.

During their stay in Badsey, the French Scouts have visited Evesham and the surrounding district.  They were very interested in the fabric of Badsey Church.  On Sunday they paraded with the Badsey Scouts on their monthly church parade, and that evening their guests cooked and served an English meal for them.

On Monday evening, after a friendly game of football, they were entertained in English homes and the language difficulty was easily overcome,

On Monday, the French Scouts, with Mr Blake and PS Dennis Knight as guides, visited Stratford-on-Avon.  They were extremely interested in the design and magnitude of the Memorial Theatre, and later paid their homage at Shakespeare’s tomb in the church.  They also visited his school and the New Palace Museum.  On the return journey they sang their national songs to an attentive audience of English passengers.

During the weekend, Mr Blake was highly honoured by being asked to receive the Scout Promise from ten of the French Scouts and to present them with their badges.  In the light of the camp fire it was a moving ceremony.  The boys saluted and promised to do their duty to God and their country, to help others at all times, and to obey the Scout laws.

The impressions they leave behind are numerous and the Badsey people will remember them singing in everything they do, as they work, as they play, and when they are marching.  Other points were their good manners, good humour, and their smart bearing on parade.  Before they eft Badsey, Jean Ducasse presented DSM Blake with the French Thanks Badge, “Amis Eclaireurs de France”. 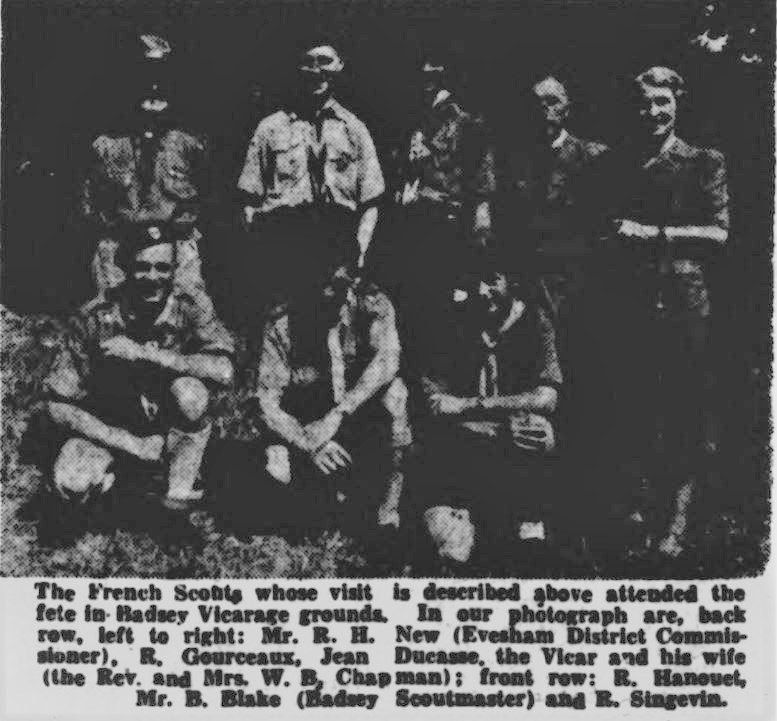