The Evesham Journal of 25th March 1933 carried a report headed –

The article concerned Mrs Emily Hartwell, who was described as an energetic little widow, who was probably England’s oldest woman sexton, and may be the only one of her sex. She had been caretaker of St John the Baptist for 40 years and carried out the duties of sexton for nearly 30 years, after taking over the duties when her husband, William, “died in 1906”. She was celebrating her 81st birthday on the day the article appeared. Nimble, full of life and always busy, Mrs Hartwell had a twinkling eye and lively tongue. She still enjoyed good health and hard work seemed to have strengthened rather than weakened her small frame – so small in stature that it was said that when in the street with children, she was asked whether she, too, was going to school !

She was a native of Broadway, one of ten children of John and Emma Cook, and she went out to get a living when very young. For several winters she worked as a shepherdess on the Cotswolds, “out in all weathers among the sheep”, earning eightpence a day. The secret of her long life, she put down to being contented and not too self-sympathetic.

She rose by 6.00 every morning and one of her duties was to ring the bell for each service and also took care of the Church linen. She now lived alone, having first come to the village over sixty years earlier, and had served three families at Wickhamford Manor and served under three Vicars at the Church. Mrs Hartwell had one son – Percy Hartwell of Broadway – and two daughters – Mrs Halford of Oat Street, Evesham and Mrs Baker of Hipton Hill, Evesham. She also had a younger brother and sister still living – William Cook of Cheltenham and Mrs Kilby of Broadway.

A picture accompanying the article shows Mrs Hartwell holding the bell rope in the Church vestry.

James Lees-Milne (1908-1997), who lived at the Manor as a child, wrote ‘Another Self’ in 1970, in which he describes, in a fanciful manner, some events concerning Mrs Hartwell. His description of her physical appearance and demeanour do correspond very well to those mentioned in the Evesham Journal article of 37 years earlier.

“I cannot remember a stage in my life at home when I did not go to church. Before I could walk I was carried there by my nurse, dumped on the floor of the pew, and allowed to make castles out of hassocks and prayer books. The ritual was always the same. Mrs Hartwell began pealing the bell a quarter of an hour before service. She was a sexton, verger and cleaner combined. She was an aged widow who gallantly brought up an orphaned brood of undisciplined grandchildren. She was tiny, about four foot nothing, with skin and sinews creased and stretched like the parchment leaves of a family bible. Her face was remarkable for an expansive smile sewn from one ear to the other, and watery blue eyes which she constantly wiped with a duster. She was never to be seen – but once – without a large hat which practically concealed her like an umbrella. The brim was covered with leaves and cherries of purple celluloid, which her grandchildren would pop during those brief intervals when she dropped off in her pew. But for most of the service she was scuttling to and fro like a minute, friendly rat, in one hand her duster, in the other a broom whose bristles were worn away with memories.

Although really too old and frail, Mrs Hartwell refused to relinquish the bell rope with its fluffy stripes in red, white and blue, called I believe the “sally”. She regarded the pulling of it her sacred duty, which she would surrender to no one, until the breath, as she put it, was out of her body. The act was sometimes attended by alarming manifestations. For bell ringing, even with one rope, necessitates a sense of rhythm in the ringer. Mrs Hartwell lacked this sense. Occasionally she would pull too soon, or too late. The rope thereupon gave a jerk and if she failed to let go – it was not in her nature to let go of things – she would be swept up the belfry. When this happened she would either cling to the rope until it came down again, or she would swing on it until her feet touched a ladder kept permanently fixed to the wall to enable workmen or builders to go up the tower. With astonishing agility for a person of her years she would scramble down the ladder and resume ringing as though nothing had happened.

Once, having been carried upwards, she failed for some reason to swing across to the ladder. Owing to the unusual velocity of her ascent to whole mechanism of the bell became dislocated, and the rope did not come down again. Mrs Hartwell was left clinging to a small fraction of the fluffy part which was stuck in the hole in the ceiling some thirty feet above the ground. She looked like one of those mediaeval saints in a state of levitation. Beneath the voluminous skirt and petticoats her button boots could be observed going through the motions of someone trying desperately and ineffectually to swim. Yet no cry of alarm escaped her.”

Lee-Milne then records her rescue. The event with the rope was a figment of Lees-Milne’s imagination (see pictures below), but otherwise the description of Emily Hartwell was most likely to have been quite accurate. 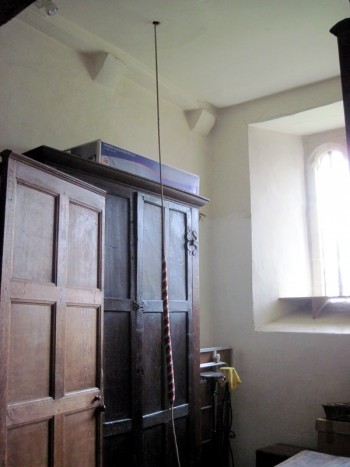 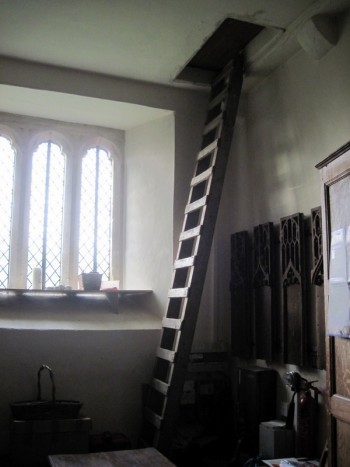 Emily Cook was born on 25th March 1852 in Broadway and the censuses of the village in 1851, 1861 and 1871 show her family. Her parents were Joseph and Emma Cook (the Evesham Journal report, above, refers to him as ‘John’) and her father was an agricultural labourer. Eight of Emily’s siblings can be identified from these censuses – Josiah, George, Ellen, Mary Ann, Charles, Sarah, Amelia and William – born between ca 1845 and 1869. Another child must have been born and died between censuses.

Emily Cook had married William Hartwell in the early Summer of 1876. In the census of 1881, Emily and William Hartwell are recorded as living in Buckland, Gloucestershire, where he was a farm labourer. After almost five years of marriage they had two children – Annie L. (4) and Arthur M. L. (1). By 1891 the family were living in a cottage on Pitchers Hill, Wickhamford and there were three children at home – Arthur (11), Amelia (7) and Ethel (15 months). In 1901, the Hartwells had moved into the village street (Manor Road) and there were again three children, this time Amelia (17), Ethel (11) and ‘Percy’ (5).

By the time of the 1911 census, Emily was a widow, William having died in May 1908 (the Evesham Journal article, above, wrongly stated 1906). She completed the census form and, although not asked to put in this information, revealed that she had been married for 30 years and had given birth to eight children, five of whom had died by this time. She was now 57 and working as a laundress. She had two boarders living with her to supplement her income and still had her youngest son at home – Raymond Percy Marstone (15) – as well as a grandchild, Edgar John Hackett. Her daughter, Annie (Hackett) had died in 1906 and Emily was taking care of her young son. The house she occupied had 5 main rooms and was one of a brick terrace of four that stood in what is now the front garden of Hody’s Place in Manor Road.

Raymond Percy Marstone Hartwell enlisted in the Worcestershire Regiment in the Great War and later transferred to the Machine Gun Corps. His service record does not survive but his medal record does and this is of interest. Normally, servicemen applied for their service medals after the War and all were entitled to the British War Medal and the Victory Medal. In this case only the British War Medal was requested and sent to Raymond Hartwell. Perhaps, after his experiences at the front, he did not consider any side was the ‘victor’ ?

In 1930, much land and many properties belonging to the Trustees of the late Thomas Lord were sold by Auction in the Town Hall in Evesham. Amongst them were the row of cottages where Emily Hartwell lived and the details show that she paid £9 per annum rent in half-yearly instalments. The properties each contained a sitting room, kitchen, scullery with furnace and sink with tap water, 3 bedrooms. There was an earth closet.

Thanks are due to Michael Bloch for permission to quote from James Lees-Milne’s book ‘Another Self’. The photograph of Emily Hartwell’s grave (below) was taken by Peter Stewart in Wickhamford Churchyard. 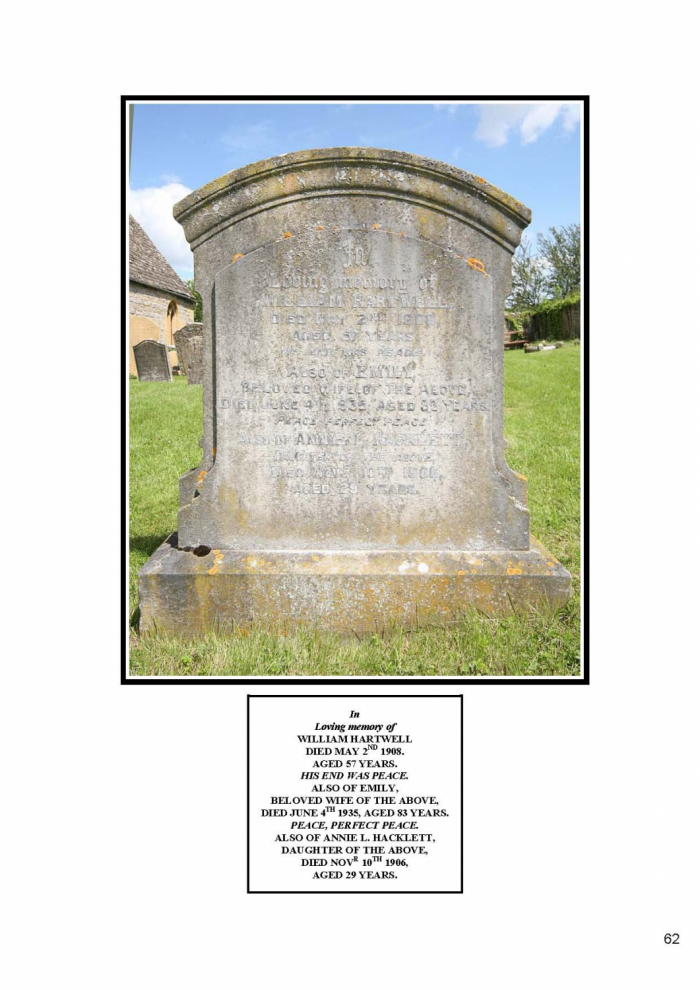