The Walters family first appeared in the records for Wickhamford in the 1881 census. Despite his advanced age, Henry Walters, at 84, was described as an agricultural labourer and he was living at Grey Gables, Manor Road. Also in the household were his bachelor son Charles, aged 31, (bapt. Elias Charles) also an agricultural labourer and Elizabeth his granddaughter who is described as a general servant. 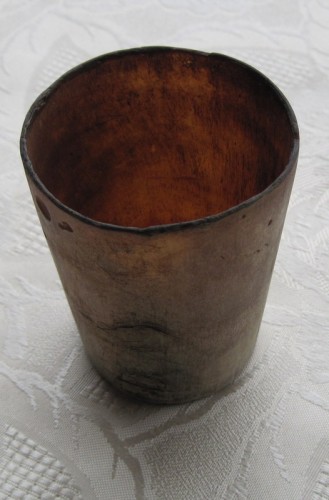 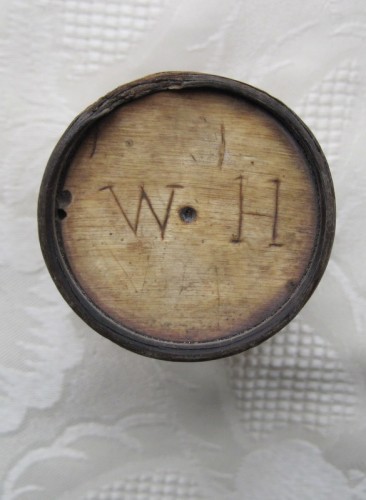 Horn drinking cup belonging to Henry Walters, with his initials on the base.

In the ten years between the 1881 and 1891 censuses, opportunities had arisen for men who had previously been employed as labourers on the local farms, to rent small parcels of land from the farming estates and work for themselves growing fruit and vegetables and Charles Walters took this opportunity. It must have seemed like freedom not to have to answer to your employer and it also gave them the chance to increase their income well beyond the wages of an agricultural labourer.

By 1901 the Walters family had moved to 8 Manor Road and were probably the first tenants of the property that had been built in the late 1890’s. Charles was still market gardening on his own account but by this time his son Harry was described as a market gardener’s labourer and would have been working for his father. By 1911 the younger son, Bill, had joined his father and brother in the family business.

The property and land Valuation Survey that took place around 1912 to 1915 showed that the family were renting four pieces of land from the trustees of J. P. Lord, a large land owner in the area. Two pieces were in Wickhamford Lane and the other two in what is described as the Coombefield Allotments and Plantations, but in local lingo one piece was in the ‘sid’ ground and the other piece was adjacent to the coppice and in the ‘furrows’. The Survey does not specify the acreages used by the growers sharing some of these fields or the crops grown. However, Charles Walters’ sales books give details of every transaction.

There is nothing unusual about the Walters family as many men in and around the Vale of Evesham started their own market gardening businesses but what makes the market gardening business of the Walters family interesting is that the produce sales books from September 1904 to May 1915 and from May 1917 to April 1923 survive together with the sales book for Bill Walters from 1931 to 1934 that includes details of wages paid.

The ledgers from 1904 to 1923 are a very detailed account of crops marketed, the merchants supplied and prices realised. In one particular season six different varieties of peas, Telegraph, William Hurst, Dwarf Defiance, Prince of Wales, Sharpes Queen and Chas 1st, were marketed. The variety of crops grown in any one year was amazing and was probably a safeguard against failure of a particular crop. Crops were grown so that there was something to market every month of the year thus providing an income all year round. A planting list for 1905/06 is given in the Appendix.

A summary of Charles Walters’ produce sales for 1909 is given in the Appendix. In that year he sold produce mainly to wholesaler H. Masters and at the Central Market in Evesham, his crops falling into 6 categories – [i] sprouts, [ii] herbs (sage and thyme), [iii] peas and beans, [iv] root vegetables (potatoes, parsnips and carrots) and onions, [v] a small quantity of bush fruit (gooseberry, blackcurrant and red currant) and [vi] asparagus (always known as ‘grass’). In that year he sold crops to the value of a little over £175; his monthly income ranged from £5 in the September to over £30 in June when the bulk of the asparagus harvest took place. The sprouts and herbs each accounted for roughly a third of his income, the remaining third coming from the assorted other crops.

Probably after the retirement of Charles, Harry and Bill decided to split the business and work for themselves. Legend has it that Harry, who never married, didn’t like spending his money on fertiliser, an essential part of growing successful crops and after a few years gave up working on his own account and worked for his brother and nephew for the rest of his working life. Harry served in France in WW1. He was an eccentric character with a wonderful memory. The land was his life and he spent many a happy hour on his own sitting in the hovel at Whitfurrows or the ‘Sid’ ground.

In 1930, E. G. Righton & Son auctioned 631 acres of land belonging to the estate of the late J. P. Lord. At that time Charles Walters was renting 11 acres of pasture land known as ‘Sally Close’, (where that road and housing now exists). John Henry had a little over 4 acres of market garden land at ‘Coombe Map’, to the East of Coombefield Plantation. Robert William shared nearly 10 acres market garden land known as ‘The Furrows’ with four other gardeners. This was an area to the South-West of Whifurrows Farm.

It was probably at this auction that Bill snr purchased 3 acres of land in Wickhamford Lane and also 3.5 acres of How Acre (also known as ‘Sid Ground’ locally).

In the sales ledgers for Bill Walters snr for 1931 and 1932 he was employing P Hartwell and his wages for 1931 were £74.4s and for 1932 £71.16s.9d. These sums seem almost unbelievable compared to present day wages but appear to have been the standard wage for a market gardeners labourer in those days.

Bill Walters married Elsie Such on 5th April 1915 at Bengeworth Church and they had one son, Charles William, also known as Bill, born in 1923. After leaving Badsey School he joined his father on the land. Bill snr suffered a stroke whilst in his 50’s which ended his working life but his wife Elsie continued to help her son on the land and was picking peas and tying onions when she was 80.

The crops grown by Bill jnr had changed to the ones grown by his grandfather. Less varieties but larger areas were grown. Peas were still a popular crop together sprouts, cauliflowers and asparagus but sage and parsley grown on contract for the LBG were a steady source of income. For a few years Bill jnr together with his cousin purchased standing crops of sprouts on the Cotswolds and then picked and marketed them.

Sadly Bill jnr suffered a heart attack in his late 50’s and was unable to continue working. He sold his land in Wickhamford Lane to local farmer, Derrick Daffurn and gave up the rented land at the furrows. He did keep the 3.5 acres he owned in How Acre and George Foster who lived at Whitfurrows Farm planted it with cereals for him.

Bill married Vera Drinkwater nee Clarke in 1951 and they lived initially in Manor Close before moving to live next door to his widowed mother Elsie in the red brick cottages next to the village hall. When his uncle, Harry Walters, moved into a residential home in Pershore Bill moved into his house at 8 Manor Road, eventually building a bungalow in the garden and ending his days there. Bill died aged 69 and Vera had died several years before. Bill and Vera had no children thus ending over 80 years of market gardening by one family in Wickhamford. 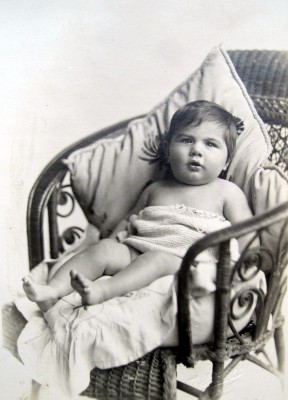 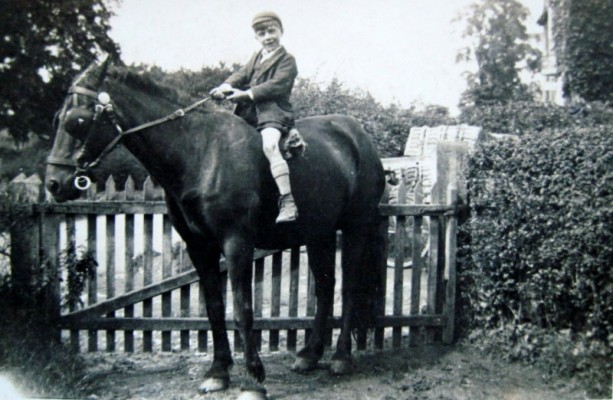 Young Charles William (Bill) Walters, son of Bill and Elsie as a baby and, in around 1930, in the garden of 8 Manor Road.

Charles Walters sold produce in 1909 to the Central Market in Evesham, to H. Masters, to William Frost and to George Jones. These wholesalers sold on the produce and then paid either in cash or by cheque.

As monthly summary of the produce sold that year is given in the table below.

Asparagus was bundled in ‘hundreds’ of 120 spears. A ‘pot’ was a hamper of 20” length, 14” width and 12” depth. The weight of the produce in a pot varied according to the crop, e.g. peas, beans and sprouts were 40lb per pot, turnips were 60lb, leafy crops such as parsley were 20lb

Comparing the value of money over the decades two measures are usually used – the Retail Price Index or cost of living, and a figure based on average earnings, or income.