Cider Mill and The Alley 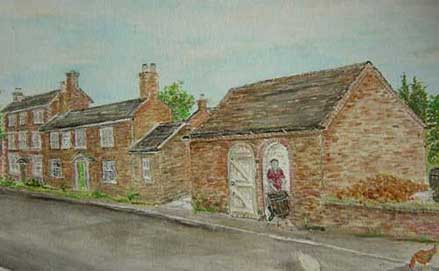 In the 1940s the Cider Mill would have been difficult to miss on Badsey High Street. To children at the time it was a place to avoid unless you were feeling brave. You first noticed the smell and then the clanging noise of the cider press. Outside there was often a great pile of discarded apple pulp being eaten by geese. Dozens of wasps were attracted by the smell.

The cider mill provided a service to local apple growers who could bring their fruit and have it made into cider. The mill closed down about 1950 and became the Poplars Garage run by Ted Wheatley. The building, which was on the right side of Gladstone Cottage, was demolished and the site has become Poplar Court.

Here is a photograph of Poplars Garage.

Between Gladstone Cottage (G) and the Cider Mill (C) was The Alley which led to four of five cottages (A). The cottages were all on the left of the alley but their privies (P) and other outbuildings were on the opposite side. At the end of the alley was a warehouse for electrical goods used by S J Wheatley. Originally this building had been a Reading Room (R) which opened in 1894. The Alley is named on the 1881 census.

The map is based on the 1883 Ordnance Survey map of Badsey. 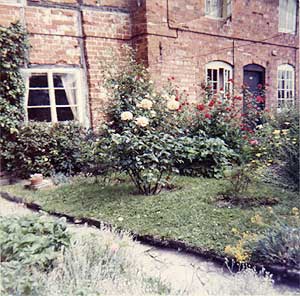 The Addis family had lived in the second of the four cottages for many years. Pete Addis, who supplied the colour photo, recalls that it was occupied by his maiden aunts, Daisy (Daisy May, 1900-1987) and Phil (Hannah Phillis, 1893-1975).

The sisters continued to live there until the cottages were demolished, around the 1960s or 1970s, they then went to live in a bungalow on High Street.

The three photographs below, taken in the 1940s, show The Alley. They were loaned by Mrs Wendy Beasley (née Tomkins), who was born at The Alley in 1940. 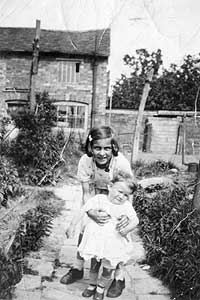 The photo above was taken about 1941 and shows Wendy with her step-sister, Hazel Barrand, standing on the cobbled pathway.

The cottages were situated to the left (out of view) and the gardens and toilets to the right (the toilets were bucket toilets with two seats, one small and one large). On the right-hand side (out of view) was an old boiler. The occupants of the cottages each had a specific day on which to do their washing, and they all got together on one day to boil their Christmas puddings. The building at the back was what was known as the "The Reading Room", but was then used by Wheatleys as a store for electrical goods. 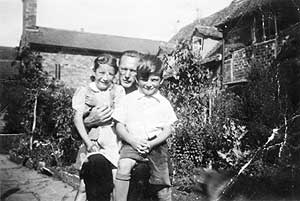 This second photo, taken about 1947, shows Wendy with her brother, and a German prisoner-of-war who stayed on after the war. The cottages can be seen to the right, and the building at the back is the rear of Gladstone Villa. There was no back entrance to the cottages, which backed on to Barnard’s orchard at the back of "Vine Lodge" (or "Meadway House" as it has recently been renamed). 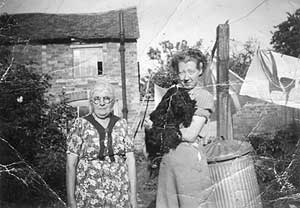 This last photo, shows "Granny Tomkins", who had been born Ellen Beatrice Hartwell in Aldington in 1880. She is standing next to a Mrs Wheatley, who moved into the cottage after Wendy’s family moved out.

John Bird, who's painting of how the Cider Mill may have looked appears at the top of this page, says "I can remember the presses inside squeezing the apples, and the workers carrying out the waste pressings in mats, and getting them over the wall, you can see them piled against the mill ready to be taken away. I will always remember the smell during cider making, you could smell the pressings all the way along the High Street for weeks. The position of the mill was approx 5 feet from Gladstone Cottage. Ted Wheatley used the mill as his first garage by knocking out the end wall, and also putting in a inspection pit in the floor. The rest of the site, which is now occupied by Poplar Court, was the site of the garage from about 1945. There was a 3ft. wall running from the cider mill along the front to Brewer's Lane corner, going round past the chestnut tree about 20 yards, also about half way there were a pair of wrought iron gates and pillars opposite The Populars [Wheatley's butcher's shop]. There was always chickens in the road and on the wall, as there were never any traffic."

Further information has come to light about The Alley in this document about Thomas Hall who lived at one of the cottages. The following document is in the possession of Ed and Karen Mountney, who live at "Bredon View", Badsey. It was included with documents relating to their own house. The reason for the documents being together, is that Theodore James Hall, who was the first owner of "Bredon View", was the son of Thomas Hall.

Here is a transcription of the document, together with a scanned image of the original document.