What is now known as ‘Oxley House’ sits on the side of Longdon Hill, Wickhamford. It has had a number of names in the years since it was built and many residents, of whom Lt-Col Staveley-Hill was perhaps the most distinguished.

The property was built in 1885 on the south side of Longdon Hill. For many hundreds of years, the land on which this house was built was owned by the Sandys family. The Wickhamford Tithe Map of 1842 (below) reveals that an area of land known as Longdon Hill, bordering the parish of Bengeworth, comprised 14a 0r 4p and was let to John Gibbs. But then, on 12th October 1869, Wickhamford Manor and the whole estate were sold by Sir Edmund Filmer and the Right Honourable Augustus Frederick Arthur, Baron Sandys, to John Pickup Lord (the Sandys family had not lived in Wickhamford for many years). Captain Lord was a wealthy landowner from Lancashire, then residing at Hallow in Worcestershire, who, three years earlier, had bought large amounts of land in Badsey and Aldington. Captain Lord died in 1877, but his estate continued to be administered by trustees for many years after his death. 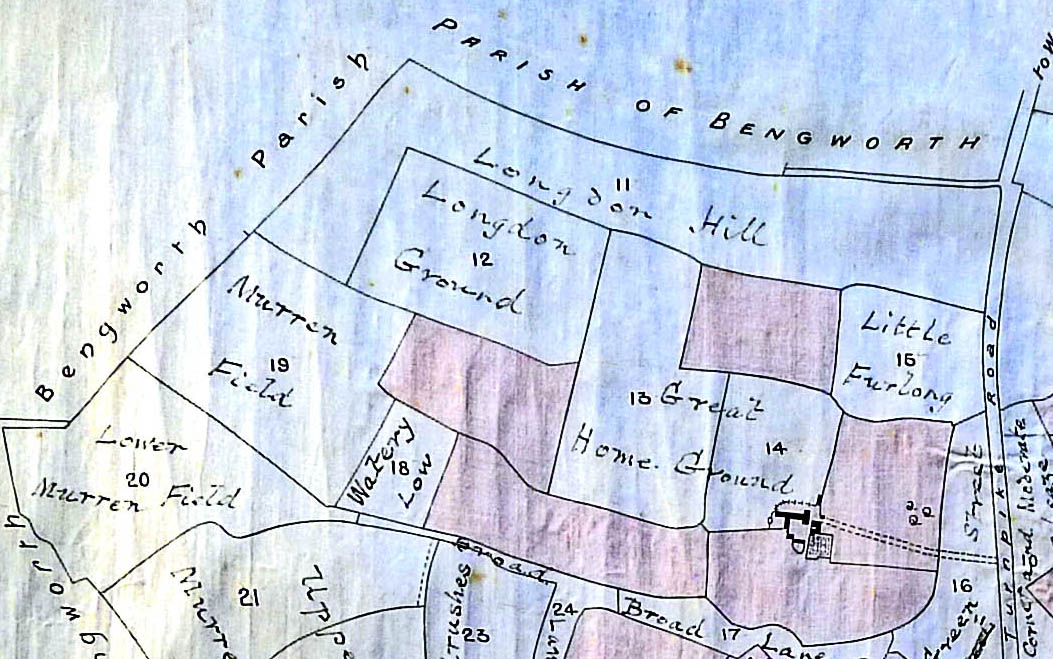 Over the years, parcels of land from the Lord estate began to be sold off. It appears that, in the immediate years following Captain Lord’s death, 10 acres of land was sold to Edmund Bullock who had been the tenant farmer at the neighbouring Field Farm since about the late 1870s. It is likely that Edmund bought the land as a wedding present for his youngest child, Frederick, who married Lucy Amelia Leman at Chipping Norton in 1885. A house was built for the newly-weds, a son and daughter were born there in 1887 and 1889, and Frederick used the land for market gardening. At that time the house was called ‘Longdon Villa’. However, it would appear that the marriage had turned sour by 1901 as the Bullocks were no longer at the house and had separated. Frederick was describing himself as a widower and was working as an electrical worker in Wolverhampton. Meanwhile, Lucy and the two children were staying with her sister, Mary E Bowes, and her husband, Robert, a fruiterer and house painter, at their home at New Market, Beccles, Suffolk. Lucy was still living in Beccles in 1911, working as a servant in the home of the Wilson family; she was still describing herself as married, but Frederick’s whereabouts are unknown.

By 1901 the name of the property had been changed to ‘Longdon Hill House’ and the tenant at the census that year was Hedley Masters, a fruit grower. Another fruit grower, Benjamin Swift, took over the tenancy in September 1909 and he was there for the 1911 census and the form give a first indication of the size of the house – eight rooms. Two weeks after Benjamin Ryle Swift took on the tenancy, he married Eveline Mary Lock on 13th October 1909 in her home town of Dorchester. At the time of the 1911 census, the house name had changed again and was referred to as ‘The Homestead’ and Benjamin and Eveline were living there with one servant.

More detailed information on the house was given for the Valuation Survey in 1912. The land was described as a clay bank suitable for fruit and there were 8 acres of 30-year-old plums in the site. The house was built of brick and slate and had three sitting rooms, four bedrooms, a bathroom and a back kitchen and scullery. Outside there were two buildings; one was stabling for two horses in a coach house and the other was a tool-house and coach house. Also, the house had been added to in 1908. The total plot area was 10 acres, 3 roods and 25 perches. Its gross value was put at £1,675. Benjamin Swift was still the occupier but the executors of Edmund Bullock owned the property. Edmund Bullock had retired from Field Farm to live near Gloucester, at Barton St Mary, and had died, aged 91, on 2nd March 1910. Sadly, Eveline Swift died in May 1913 at the early age of 35. It is not known how long Edmund Bullock’s executors continued to own the house or how long Benjamin Swift continued to live there. In September 1930, when the trustees of the will of the late Captain John Pickup Lord put up for sale the whole of the Wickhamford estate, Mr B R Swift was described as the tenant of No 2 Longdon Hill. He may have chosen to move to a smaller property after the death of his wife. Benjamin Swift died in the Evesham area in 1947. 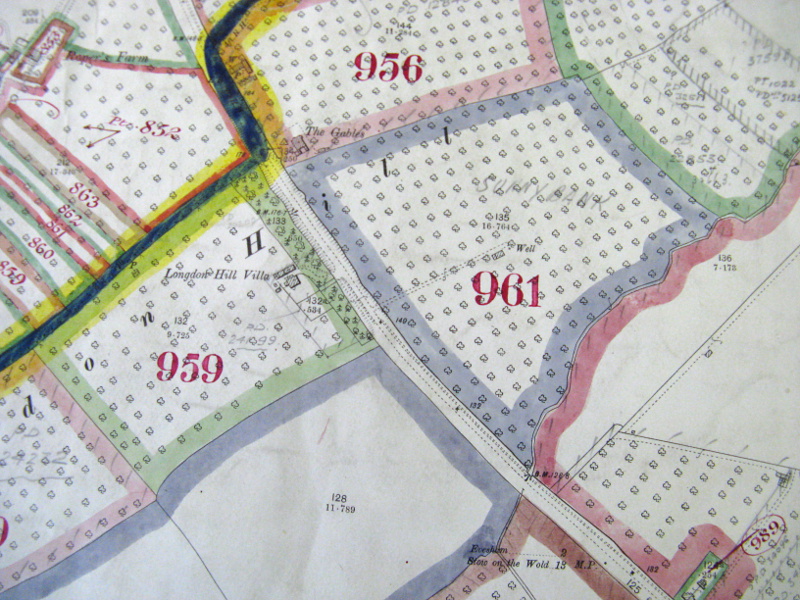 The name of the house was changed again in 1938, after Lt-Col Henry Staveley Staveley-Hill bought it. He renamed it ‘Oxley’. Presently, the property is called ‘Oxley House’.

Henry Staveley Staveley-Hill had been born on 22nd May 1865, the son of Alexander and Katherine Cumpstone Florence Staveley-Hill nee Ponsonby. Alexander (1825-1905) was a J.P., Deputy Lieutenant of Staffordshire and M.P. for Coventry (1868-1874).

Henry was educated at Westminster School and St John’s College, Oxford. He became a Barrister and was Recorder of Banbury from 1905 to 1918. He married Eileen De Grey D’arcy in 1901 and entered Parliament as Conservative M.P. for Kingswinford, Staffs. on 4th July 1905. The newly married couple lived in ‘New Oxley House’ on his father’s estate near Wolverhampton. Alexander Staveley-Hill died in 1905 and his son moved into the family home of ‘Oxley Manor’.

In the 1911 census, Henry and Eileen were living at ‘Oxley Manor’, described on the form as a 25-room property, and had eight servants living in. His occupation was given as Barrister At Law and there were four children – Alexander de Grey (9), Katherine Eileen Staveley (7), Dorothea Garnier Staveley (5) and Henry de Burgh Staveley (4).

During the Great War, Henry Staveley Staveley-Hill became a Major in the 2/1st Staffordshire Yeomanry, becoming their Commanding Officer, with the rank of Lieutenant-Colonel in 1916. The regiment was used only for home defence and he resigned his commission in 1917. He left Parliament at the November 1918 General Election and the family left ‘Oxley Manor’ in 1920 to live in London. The property was demolished in 1929.

Henry became a County Court judge in 1922, a position from which he resigned in 1928. In the summer of that year the newspapers reported that the creditors of Mr Henry Staveley-Hill of 94 Pall Mall, formerly M.P. and until recently County Court judge were in the London Bankruptcy Court. There were a number of such meetings and the papers disclosed that Henry Staveley-Hill had liabilities of £18,115, of which £13,450 were unsecured, and assets of £1,062.

Henry and Eileen Staveley-Hill moved to Wickhamford in 1938, renamed the Longdon Hill house as ‘Oxley’ in reminiscence of their Staffordshire estate and lived there until his death on 25th March 1946. He was buried in the family grave in Bushbury, Staffordshire. His Evesham Journal obituary recorded his career, mentioning that he was a J.P. for Staffordshire, Warwickshire and Northamptonshire and for many years a member of Staffordshire County Council. His father, Alexander, had been Judge-Advocate of the Fleet. In 1925, Henry had been appointed independent chairman of the Eastern District Board under the National Agreement for Regulating Wages in the Coal Trade. He had rowed for his college and after moving to this area he had taken an interest in Evesham Rowing Club. He was a member of the Leander and Garrick clubs. Another obituary, in the Evening Telegraph in Scotland, mentioned that he regarded ‘22’ as an important number in his life. He was born on 22nd May 1865, christened on a 22nd, married on a 22nd in 1901, and two of his children were born on the 22nd. He was called to the Bar on a 22nd, appointed Recorder of Banbury on a 22nd in 1903 and became a County Court judge on a 22nd in 1922.

Eileen Staveley-Hill put ‘Oxley’ up for sale soon after her husband’s death. An auction was held at the Rose & Crown Hotel, Evesham on 29th April 1946 (see below for a description of the house at that time in the sales details). Eileen died in December 1968 and was buried at Bushbury.