91-year-old Fred Mason, currently the oldest Wickhamford resident actually born in Wickhamford, has the following memories of schooldays in Badsey, recounted in an interview at his home on 13th November 2001. 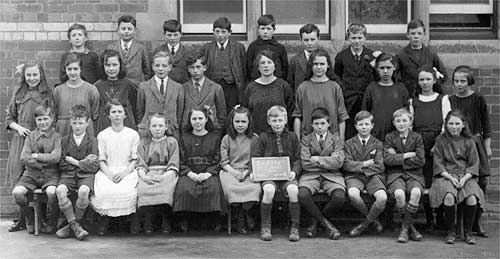 A. We lived at Pitchers Hill, Wickhamford. On my very first day at school, as a young lad of five, Miss Nancy Pethard took me to school. After that I had to fend for myself. I and some of the other children from Wickhamford would meet up and walk together. My main pals were Edgar Southern and Jack Styles. We started at 8 am, messed about on the way, and would get to school by 9 am. There were very few cars, just horse and drays, so there were not the dangers that there are today. Very occasionally, severe weather conditions such as snow or floods would prevent us from getting to school. On the way to school, we would drop off the milk cans at Elm Farm, the farm belonging to John Mason (husband of Mrs Mason, the Infant School Head), and then on our way home from school we had to collect the milk. We usually went by the road, though occasionally went past the church and along the footpath; this was usually in summer when we could paddle our feet in the brook. Each side of the road (Golden Lane) was a fruit farm belonging to Wickhamford Manor. I remember we used to stand and watch small groups of German soldiers working there during the war. One day, as we stood there watching, one prisoner came out and gave us a penny each; I will never forget that moment, and often wonder what happened to him.

Q. How long was the school day?

Morning school was from 9-12 and afternoon school from 2-4. In winter, it was dark before we got home. At one time, the Wickhamford mothers got up a petition to see if lunchtime could be reduced to 1½ hours so that the children could leave half an hour early, but the staff did not want to change the hours.

Q. So what did you do during the long lunch period?

We were left to roam the village. Frank Caswell, the blacksmith, was often our first port of call. Little groups of us just stood there watching him. He was very patient and never told us to go away. Another favourite place was opposite The Manor, watching the German prisoners of war returning for lunch. A third place we frequently visited at lunchtimes was the Cider Mill where we would occasionally be given a drink of apple juice. When I first started going there, there was a pony going round and round to crush the apples, but then there was a machine. We used to take a packed lunch, something simple, like bread and cheese, which we would put in a satchel and hang on our peg at school. But often the lunch would be stolen, so we had to hand it in and it was kept in a separate room and handed out again at 12 o’ clock.

Q. What are your memories of the Infant School?

Miss Hartwell took the first class, then Miss Hunt (a relative of the Wheatley family), and Mrs Mason was the Head. I well remember one morning in school in 1917 when Mrs Mason was very upset, she had just received news that her son, George, had been killed in action. Miss Hunt and Miss Hartwell were consoling her.

Q. What are your memories of the Mixed Department?

I moved to the Mixed Department when I was eight. Mr Amos, the Head, was very strict. The other teachers were Miss Byrd, Miss Crisp, Miss Aldington and Miss McDonald. When we were about 12 or 13, Edgar Southern and I used to get sixpence a week from Mr Amos to go and do jobs in the garden. Sometimes on a Friday afternoon I might be asked to slip down to the baker John Cull’s and get Mrs Amos a dough cake.

Q. What was your favourite subject at school?

I liked painting and drawing. We used to do a lot of still life work. Some of my paintings won prizes at Badsey Flower Show. Badsey Flower Show was always a good day out; we always looked forward to that as a highlight of the year.

Q. Did you go to Grammar School after Badsey?

I was one of eight children from Badsey who sat the Grammar School entrance exam. All eight passed, but there were not many free places available in the county. We sat the exam again, and this time three got free scholarships, but I was not one of them. So I left school in 1924 and went to work in the gardens at Wickhamford Manor for three years, when Mr Lees-Milne owned The Manor.

The interview was conducted and edited by Maureen Spinks in November 2001.