BADSEY is a village and parish, bounded on the west by the River Avon, 1½ miles south from Littleton and Badsey Station, about 2¼ miles east from Evesham, in the Southern division of the county, Upper Blackenhurst hundred, Evesham petty sessional division, union and county court district, rural deanery of Evesham and archdeaconry and diocese of Worcester. The church of St James is an ancient edifice of stone, in the Early English and Perpendicular styles, consisting of chancel, nave, north transept, south aisle with porch, and an embattled western tower, containing 6 bells with chimes. The interior of the church retains little of its original character, but has a monument, much mutilated, to the Hoby family. There is a stained window in the north transept to Mr Edward Appelbee, who died in 1851, presented by his widow, Mrs Appelbee. There are 200 sittings, 96 being free. In the churchyard, near the porch, there remains a portion of the pedestal of an ancient cross. The church has been restored (1888) at a cost of upwards of £2,000. The register dates from the year 1538. The living is a vicarage, gross yearly value £240, including 153 acres of glebe, with residence, in the gift of the Dean and Chapter of Christ Church, Oxford and held since 1887 by the Rev Charles Granville Gepp MA of Christ Church, Oxford, who is also vicar of Wickhamford. The charities amount to £12 a year, distributed in bread to the poor of Badsey every quarter, and £6 a year distributed in like manner to the poor of Aldington. At the time of the dissolution of Evesham Abbey there was standing on the site of the present manor farmhouse an infirmary for the invalid brethren of that establishment. The rights of the lord of the manor of Badsey were purchased, together with the churchyard, in the year 1866 from Mr E Wilson, the late lord of the manor, and are now vested in the incumbent for the time being. The principal landowners are the trustees of the late Captain John P Lord (d 1877), of Hallow Park, the Dean and Chapter of Christ Church, Oxford, Thomas Byrd Esq of Aldington, Herbert New Esq, William Henry Ashwin Esq, DL, JP, of Bretforton, Thomas Yardington Tovey Esq of Church Lench, the Rev Thomas Humphris Clark MA of St Lucy’s Home, Gloucester, and William Smith Esquire. The land is fertile, some arable, but from 1865 much farm land has been converted into garden ground. The area is 1,157 acres; rateable value, £2,698 15s; the population of Badsey alone in 1881 was 442 and of the parish 577.

Wall Letter Box, cleared at 5.30 pm week days only. Letters through Evesham, which is the nearest money order and telegraph office, arrive at 7.30 am.

National School (mixed), erected in 1854, on a site given by the late Richard Ashwin Esq at a cost of £372, for 110 children; average attendance, 97. Miss Elizabeth Wagstaff, Mistress.

ALDINGTON is a small village and hamlet, 1½ miles south-west from Littleton and Badsey railway station, about 2 miles east-by-north from Evesham. Here is a Baptist chapel. The Manor House, the modern villa of Henry Ashwin Esq, lord of the manor, but now in the occupation of Arthur Herbert Savory Esq, stands in the village on the margin of a stream, which descending from the Broadway Hill, flows into the Avon, turning several miles in its course. The Parks Farm, on the banks of the Avon, is the property of the Rev Thomas Humphris Clark MA, and is now occupied by Mr John Kenelm Woodward. The land is fertile, chiefly arable. This hamlet contains about 632 acres; much land is devoted to garden purposes and hops are grown here; rateable value £2,244; the population in 1881 was 135. 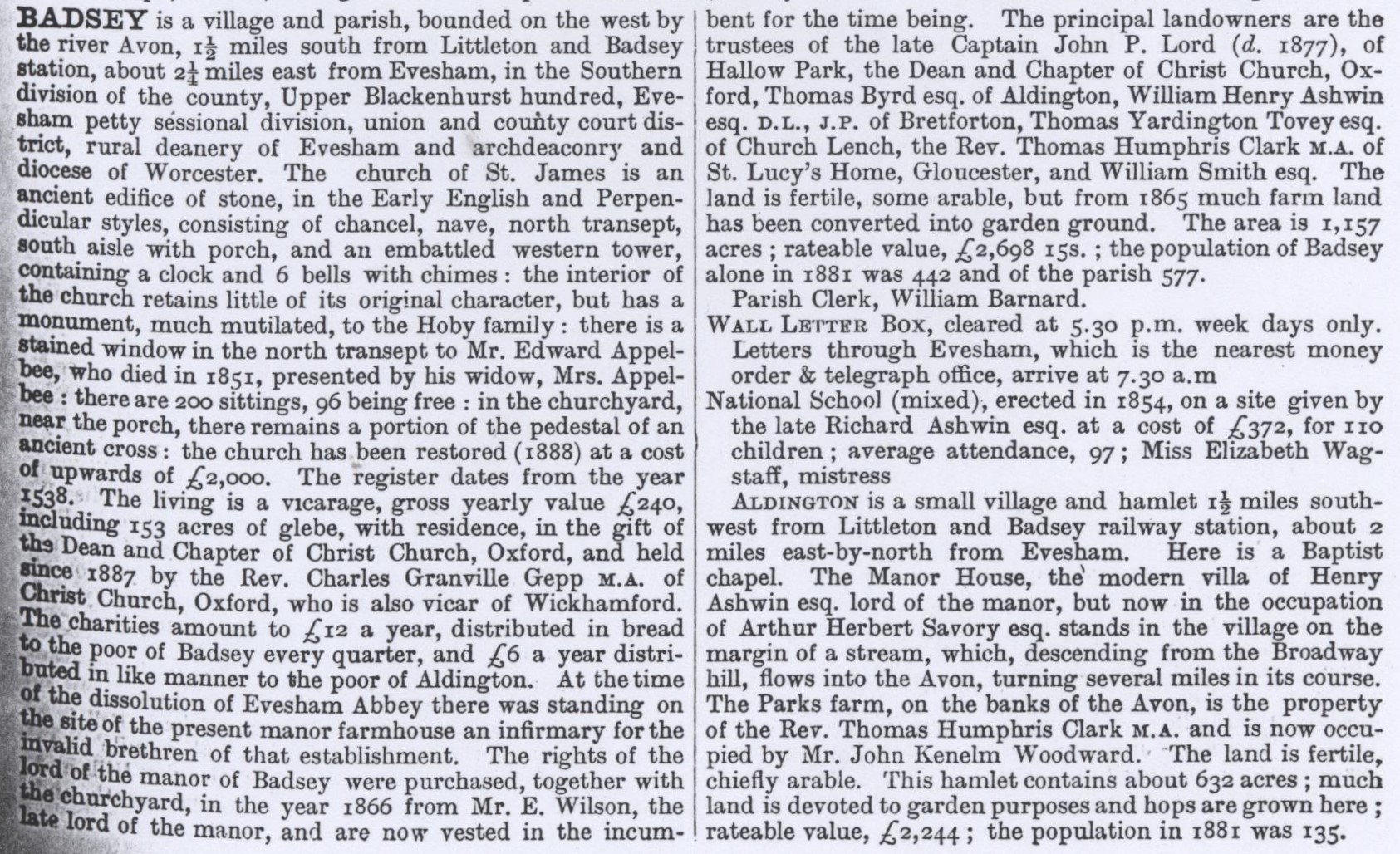 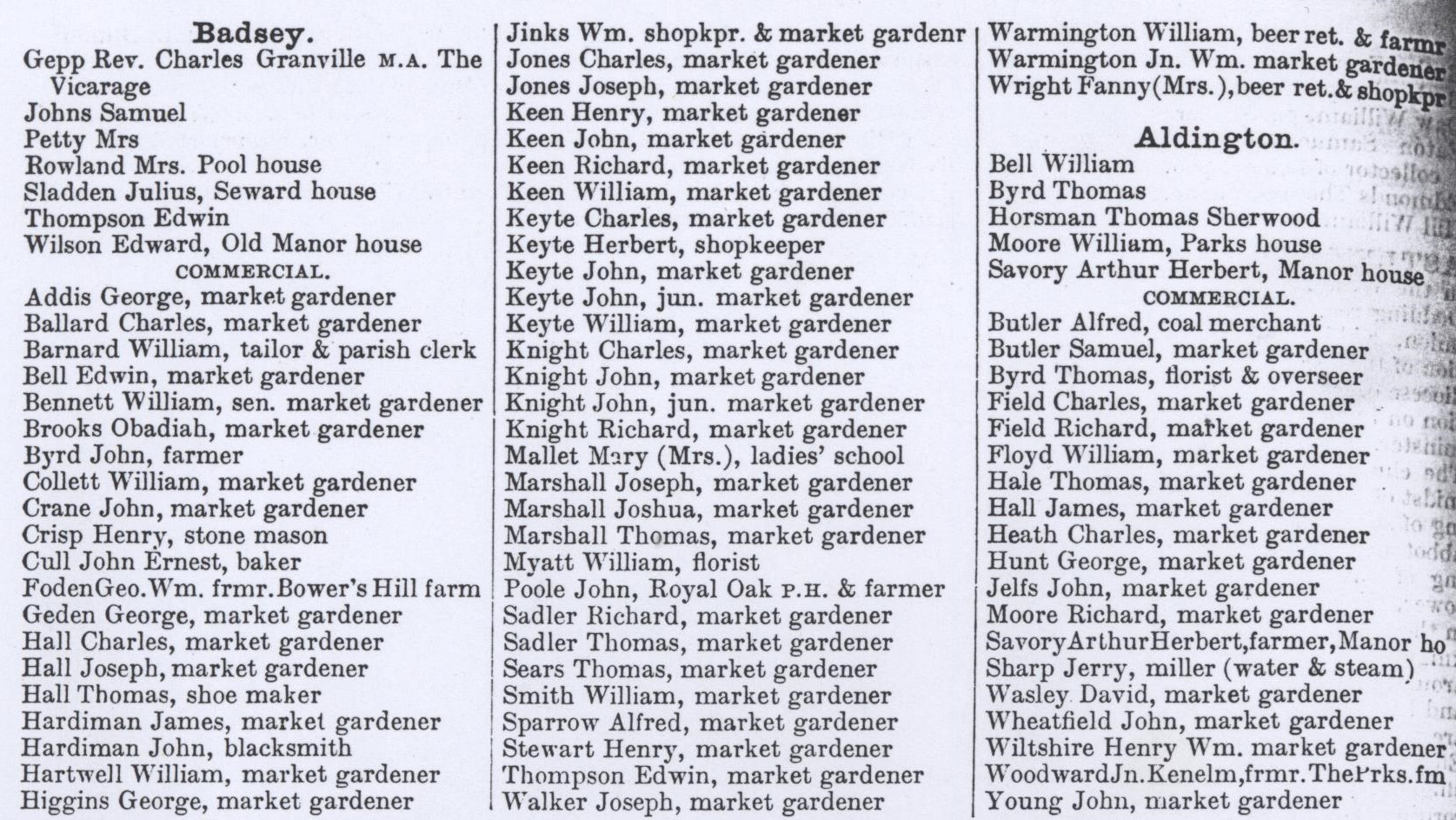 WICKHAMFORD is a small village and parish, about 3 miles south-east from Evesham in the Southern division of the county, Evesham petty sessional division, union and county court district, Upper Blackenhurst hundred, Evesham rural deanery and Worcester archdeaconry and diocese; the parish is bounded on the south by Gloucestershire. The church of St John the Baptist is a building of stone in the Early English style, consisting of chancel and nave, south porch, and an embattled western tower of two stages containing one bell; the whole was re-seated, thoroughly repaired and carefully restored in the year 1841, at the expense of Lord Sandys; in the church are two elaborate altar-tombs of the Sandys family, placed end to end, under a continuous flat canopy, supported by five Corinthian columns; on each tomb are the recumbent figures of a knight in half-armour and his lady, and at the back are shields of arms; the cornice is ornamented by pinnacles and groups of figures, as well as two large quartered shields, with helm and mantling; these commemorate Sir Samuel Sandys, knight, eldest son of Edwyn Sandys DD, Archbishop of York (1577-88), ob 1626, and Mercy (Culpeper), his wife, 1629; and Sir Edwyn Sandys, knight (son of Sir Samuel), also 1626, and Penelope (Bulkeley or Buckley), his wife, 1680; on the front of the first tomb are the figures of four sons and seven daughters, the eldest son and all the daughters having small shields of arms above their heads; on the front of the other tomb are the figures of five sons and three daughters; there are 80 sittings.. The register dates from the year 1538. The living is a vicarage, tithe rent-charge £40; gross yearly value, £50, including 12 acres of glebe, in the gift of the Dean and Chapter of Christ Church, Oxford, and held since 1887 by the Rev Charles Granville Gepp MA of Christ Church, Oxford, who is also vicar of and resides at Badsey. The trustees of the late Captain John P Lord (died 1877), of Hallow Park, who are lords of the manor, and the Rev Thomas Henry Hunt, MA, of Boveatton, Baschurch, Shrewsbury, are the principal landowners. The soil is rich mould, very fertile; subsoil, some sand and clay. The chief crops are wheat, oats, barley and fruit; much land is devoted to garden purposes. The area is 1,242 acres; rateable value, £1,209; the population in 1881 was 123.

Letters arrive from Evesham at 8.30 am, which is the nearest money order and telegraph office.

The children of this place attend the school at Badsey.