These advertisements appeared in the Parish Magazine in the early years of the twentieth century. It was a prosperous time for the village with a large growth in population and extensive house building. Kelly's Directory for 1912 shows that by far the commonest business at this time was market gardening.

The Parish Magazine was started in 1898 and sold to subscribers at a penny a month. The first year showed a loss of £2, owing to the cost of printing, so in January 1899, the first advertisement appeared on the back page: Elliott, 59 High Street, Evesham, Chemist. Throughout 1899, Elliott was the only advertiser. In 1899, due to a reduction in printing and revenue from the advertisement, the magazine was able to pay its way and have a small balance in hand towards paying off the previous year’s deficit. In January 1900, a second advertisement appeared, inside the back cover: T M Evans, Grocer, Bridge Street, Evesham. For a brief period in 1902, Evans did not advertise, and his slot was replaced by Handel Wheatley for three months. It was not until 1904 that more advertisers started to appear. 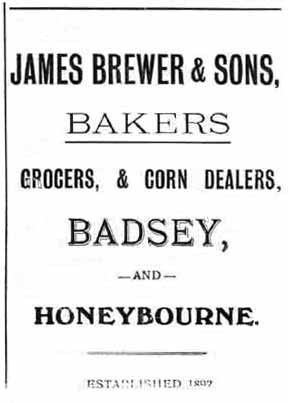 Here are some articles in the Parish Magazines at about the same time.