An area of Badsey High Street has for centuries been a watering hole.  A roadside pool (close to the house known as Pool House) gave welcome relief for cattle and horses passing on their way through the village.

In 1870, Badsey Church Vestry asked William Byrd, a 29-year-old farmer living opposite the roadside pool at Seward House, to tidy it up and erect a pump and water trough at his own expense.  This he did.  By 1897 though, the pump was in need of repair and the trough was worn out.  Badsey Parish Council tried unsuccessfully to persuade Evesham Rural District Council to assume responsibility for the water facilities.  Time rumbled on and eventually the pump and trough were dismantled.  In their place, a drinking fountain was eventually built in 1912.

The drinking fountain is now obsolete but still stands proud as an important landmark in Badsey High Street.

Plans for the Fountain

The idea came about after the coronation of King George V in 1911.  Owing to the business ability of Mr C A Binyon and the Parish Council Finance Committee, it was found that they had a small surplus after the coronation celebrations; a subscription list was opened to add to this.  It was decided to devote the money to a permanent memorial in the form of a fountain to commemorate King George V’s coronation, hence the inscribed front panel:  “This fountain was erected by public subscription to commemorate the Coronation of King George V, June 22 1911.”

In the spring of 1912, the Sanitary and Building Plans Committee of Evesham Rural District Council approved Badsey Parish Council’s request to erect a drinking trough on the site of the old village pump, and to allow a water service to the fountain provided that the Council appointed someone to see that the water was not wasted.

The work was carried out by Messrs W & H Gardiner of Evesham; the plumbing was done by Mr A Salisbury of Evesham.  Built mostly of Cotswold Stone, the fountain’s square structure was Gothic style, with sunken panels on each face.  The troughs were made from Handsworth stone.  The front trough was for horses or cattle to drink from.  Two smaller troughs below were intended for dogs to drink from and the larger ones further up, had taps and drinking vessels.

The official opening of the fountain took place on Saturday 22nd June 1912 at 4.30 pm, the first anniversary of Coronation Day.  As Julius Sladden, Chairman of the Parish Council, said in opening proceedings:  “We generally do things pretty well in Badsey, if not very rapidly.”  The opening was performed by Mrs Eyres Monsell (the wife of the MP) who took the first drink of water.  She unlocked the door at the back of the fountain, the water was turned on, and then she pressed the brass knob and fitted one of the cups from which she drank; several other ladies also tasted the water.

Mrs Eyres Monsell’s husband, Bolton Meredith Eyres Monsell, was also present, as were Lord and Lady Lifford and various local dignitaries, and a large crowd of villagers.  Lord Lifford said it was an extremely good thought to put the surplus money into a fountain memorial.  He was told by the ladies who had tasted the water that it was extremely good.  He indicated that if it had been port he might have been able to express an opinion!

Mr Eyres Monsell said his wife had asked him to reply on her behalf.  There was much laughter at his comment that he did not see why she should not reply herself, but she told him it was because she did not have a vote and he was paid £400 a year for talking.  He then went on to say that he thought that if they had a little of that nice water, a bottle of whisky, and one of those cups the Badsey footballers had won, it would make a very nice combination; this remark was well applauded.

The opening ceremony concluded with the singing of the National Anthem by the school children.  A large company then adjourned to Mr Sladden’s garden at Seward House where tea was served at 5 pm and the rose garden was open to visitors.  After tea, a programme of National songs and old English dances was performed by the schoolgirls dressed in white with red, white, and blue sashes and hair ribbons.  They had been carefully trained by their teachers, Miss McDonald, Miss Bird and Mr McDonald; Miss McDonald played the accompaniments.

A lengthy report in The Evesham Journal of 29th June 1912 gave full details of the day.

At some stage in the mid 20th century, the memorial ceased to be used as a drinking fountain, but when this happened is not known.  Photographic evidence from 1968 shows that it no longer fulfilled its original function. 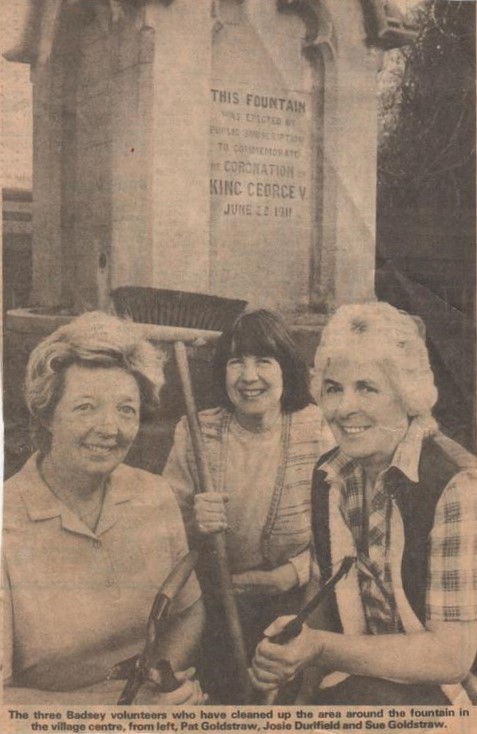 By the mid 1980s, the fountain was in a bad state of repair.  An article in The Evesham Journal of 1985 told how three Badsey women decided to smarten up the local landmark.  It was very overgrown, and the fountain basins were full of rubbish.  Thus Josie Dudfield, Pat Goldstraw and Sue Goldstraw decided to restore it to its former glory.  The ladies’ efforts uncovered more than just a mountain of junk – they also revealed some squared paving stones on the path leading to the fountain, previously hidden by grass and weeds.  With the fountain spruced up, the workers planted some bulbs, kindly provided by Pat’s aunt.

In the summer of 2017, to mark over 100 years of the fountain’s existence, Badsey Parish Council commissioned a local craftsman to restore the fountain to its original state, with the exception of the ornate feature at the top.  Chris Sherriff from Memory Lane Memorials, Pershore, undertook the painstaking task of cleaning the fountain, adding drainage holes to the planters and reconstructing the top as well as adding a commemorative plaque.

Keith and Sheila Taylor, who for many years have planted and maintained the planting, continue to keep the fountain well-stocked with seasonal colour.  They were worthy winners of this year’s Tony Jerram Award.  In the words of one of the people who nominated them, “their selfless dedication to the memorial is a joy to everyone.  It is always kept immaculate with beautiful flowers bought by Keith & Sheila from their own funds and which they refuse to be recompensed for.”

We hope that the fountain will continue to delight passers-by for many years to come.

Acknowledgements:  Thanks to Valerie Magan who has done much research into Badsey’s early water supply, to Josie Dudfield who gave a copy of the 1985 press report which provided the impetus for writing this article, and to John Sharp for transcribing the report.