After receiving a postcard photograph labelled ‘Wickhamford Albion F. C.” research began into the Club, its players and Committee members. In the picture, shown below, the ball is inscribed; on close examination it seems to refer to the 1919-20 football season.

One player was indicated by Xs (removed to reproduce the picture for the website) and he was thought to be George Frederick Cox. This man left Wickhamford for Canada before the Great War, returned with the Canadian Army and stayed on for a short while after the War. He returned to Canada in 1920. Only one other player was positively identified at first, Gilbert Franklin, later a market gardener in the village.

On checking microfilm copies of the Evesham Journal for the 1919-1922 period it was found that Wickhamford Albion played in the North Cotswold League, 2nd Division, Section ‘B’, in the 1919-20 and 1920-21 seasons. They also started playing in this league in the 1921-22 season but after playing on 28th January 1922, apparently resigned. Up to that point they had played eleven games, winning two, drawing five and losing four (scoring 24 goals and conceding 24).

The only reference to players’ names was the team who played on 11th September 1920. This was only a few months after the team was photographed for the 1919-20 season, so it seems probable that many of the team pictured are in the September team list.

F. Taylor is Frederick Taylor, who was known to have played for Wickhamford. Born in 1885, he would have been about 35 at the time of the picture.

J. Colley is probably Jesse Colley, born in 1897, who served in the Great War and died in 1969. He is buried in Wickhamford Churchyard.

A. Barnard is possibly Arthur Barnard, who lived in Badsey before the Great War and was born in about 1899.

F. Mumford could have been Fred Mumford who lived in South Littleton before the War and was born in around 1901.

C. Parker, who was the Captain in 1920, was definitely Charles Parker.

W. Hiden may be William Hiden of Evesham, born around 1899.

W. Hall; Hall is a common name but a Walter Hall, born around 1894, lived in Badsey before the War.

T. James: James is a common name, but the only one near Wickhamford in the 1911 census was William G. James of Pebworth, born around 1897. 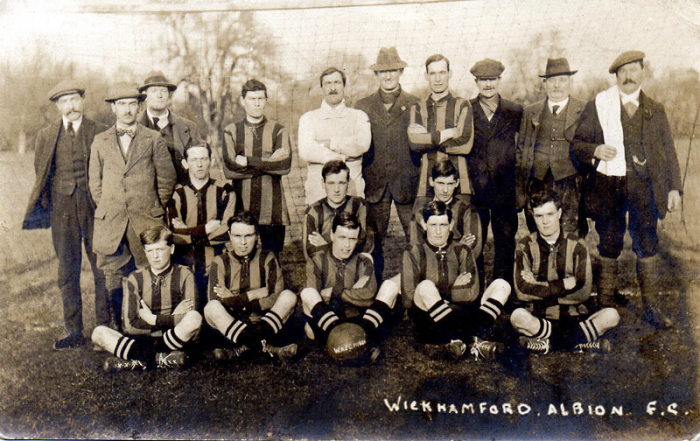 Players tentatively identified in the picture are Charles Parker, standing 4th from the right, Gilbert Franklin kneeling on the left, and George Cox, kneeling in the middle. William Jelfs is seated second from the left. The goalkeeper is Frederick Taylor. The seated player on the far right could be Albert Cox.

The non-players are likely to be Club Committee members. On the far left, is probably Jarrett Pethard. Next to him, with the bow tie, is Frank Banner, the landlord of the Sandys Arms (where the team changed into their kit).

Before the establishment of the Sports Ground at the end of Sandys Avenue, Wickhamford football teams played their home fixtures in the field known as Mill Dean, near Wickhamford Mill. 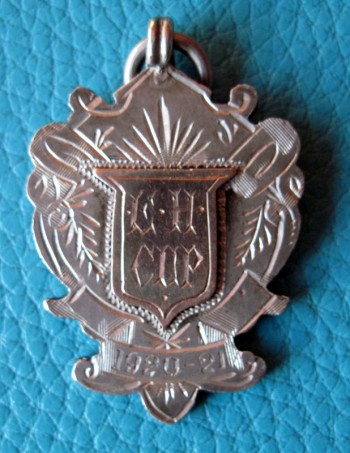 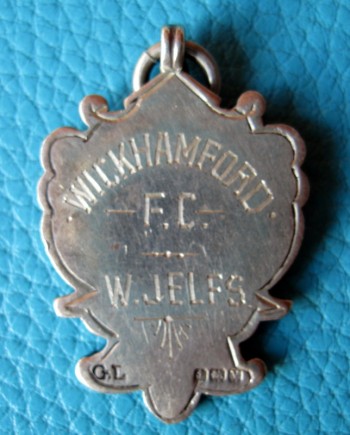 The silver medal awarded to William Jelfs after Wickhamford Albion won the Evesham Hospital Cup in the 1920/21 season.

Any information regarding Wickhamford Albion would be welcomed.