An article by local historian Tim Porter, in the Worcester Journal of 3rd February 2005, gave a summary of the county of Winchcombeshire.  This is the basis of the information that is presented below.

When founded in 1860 The Journal was also known as The Four Shires Advertiser, to reflect its broad reach across Worcestershire, Warwickshire, Gloucestershire and Oxfordshire. However, in the distant past much of this area was covered by a single shire - the long-forgotten county of Winchcombeshire. With Winchcombe at its heart, it included a large swathe of the Vale of Evesham, an area of Warwickshire reaching to the gates of Stratford and the Cotswolds as far south as Bourton-on-the-Water, taking in Cheltenham along the way.

The Anglo-Saxon period has been very much overlooked since the Norman Conquest became the big event in English history - for a lot of people it is as if nothing happened before then.  In fact, it was when England was formed as a nation - 1066 was just a regime change.

It is thought that Winchcombeshire was created in 1007 during the reign of Ethelred the Unready. Frequent Danish incursions into the west of England made strengthening local administration - so improving the efficiency of tax gathering - an urgent priority. As a result, five counties were formed - Winchcombeshire, Gloucestershire, Worcestershire, Warwickshire and Oxfordshire.  Four of the counties survive largely unchanged to this day, but Winchcombeshire was done away with in the next big shake-up in 1017 and most of it was absorbed into Gloucestershire.

The original shape of Winchcombeshire, combining the lowlands of the Vale of Evesham and Warwickshire with the uplands of the Cotswolds was based on economic good sense. It was important to have a mixed landscape with low-lying fertile areas for crops and upland areas for livestock. This consideration could also explain the presence of so many rich monasteries in the area, such as Evesham, Winchcombe and Hailes. They are all along the edge of the Cotswold Hills, meaning that they could draw wealth from growing crops and from rearing livestock. Traces of this tradition could still be identified in the practices of some modern farmers, who hold land in both areas for different purposes.

In 1990, Julian Whybra published a book in the Studies in Anglo-Saxon History series, entitled ‘A Lost English County: Winchcombeshire in the Tenth and Eleventh Centuries’.  This very detailed volume examines all of the manuscript sources of the period and the reasons for the establishment of the county system of administration in the West Midlands.  This was done by around 1007 in response to Danish incursions into the area.  Winchcombeshire only had a very short existence and by the time of the Domesday Book, after the Norman invasion in 1066, it had already been merged with Gloucestershire to its south.  As mentioned above, this union of the two counties probably took place in about 1017.

The shire system was established in the Midlands after the Kingdom of Wessex took over the area that was previously the Kingdom of Mercia in 918.  The Mercian capital of Tamworth was downgraded and burgh towns in the new counties were established: - Stafford, Derby, Leicester, Nottingham, Northampton, Oxford, Warwick, Worcester, Hereford, Gloucester………. and Winchcombe.  The older tribal area occupied by the Hwicce in the south of the Midlands, was deliberately split up into the shire or county system – Worcestershire, Gloucestershire, Warwickshire and Winchcombeshire – to destroy any evidence of its identity.

The map below has the villages of Winchcombeshire highlighted in yellow - these are the ones mentioned in Julian Whybra’s book. For reference,  Wickhamford, Badsey and Aldington are highlighted in red, to show their proximity to the county. 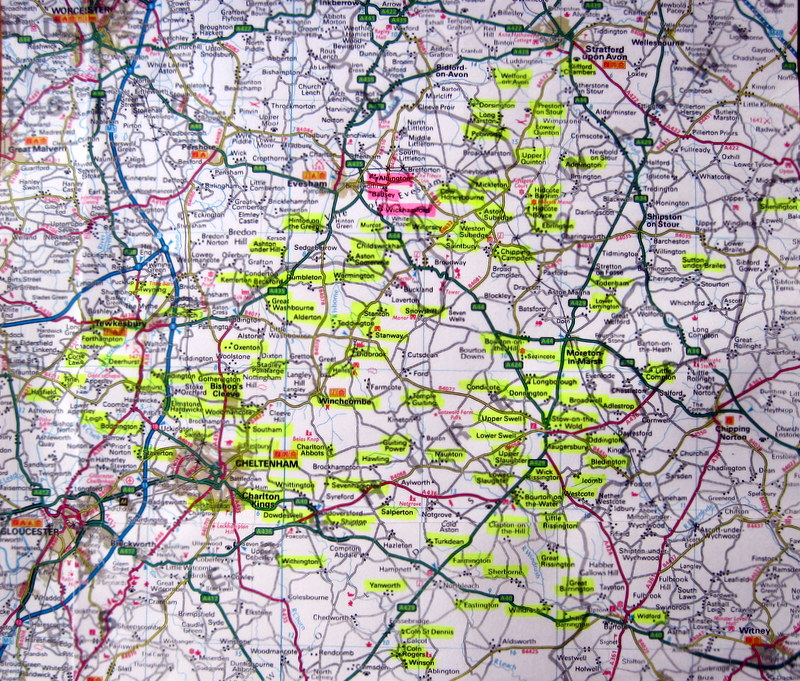 Acknowledgements:  Thanks are due to Carol Jackson of the Chipping Campden Historical
Society for locating information on this topic, including the map from The Journal.