Wickhamford Parish Room was first opened on Tuesday, February 12th 1907.  The building cost had been paid for by the late Captain Lord's family and amounted to £200; they also donated the land free of charge. Arthur Lord also provided timber for fencing and gravel for paths.  Other materials were generously supplied  by a number of villagers.

Numerous villagers have, over the following century, been involved in the governance of the Hall and some details are set out below.

On the one hand Sir Henry Foley Grey and Charles Edward Leigh, Trustees of the Estate of J. P. Lord, who were supplying a plot of land for the building and, on the other hand, a group of, mainly, local parishioners. This agreement was the conveyancing of land and a building for use as a Parish Room and Club.

The parishioners and others concerned were :-

(B) At the Land Valuation Survey in 1915, the building was described as ‘The Reading Room’, with land of 466 sq. yds.  It was a new brick and tile building, roughcast, with two chimneys, a wood block floor and “a stained open roof”.

The owner’s name was given as Rev. W. C. Allesbrooke and the occupier as the Manageress of Wickhamford Reading Room, but no name was given. At that time, it had a gross market value of £215.

It is believed that during the inter-War period an artillery shell was mounted on one of the gate pillars, but no photograph of this has been located.  It would have been removed for scrap during the Second World War.

(C) After the Second World War, the building was refurbished and enlarged with extra rooms on the side away from the road.  This was constructed with a flat concrete roof of the type used for air-raid shelters.  This area now contains the gentlemen’s toilet, kitchen and storage rooms, one of which was originally designed as a Committee Room.

Mentions of the building's name in the local press changed from 'Reading Room' to 'Memorial Hall' in mid-1947.  This change probably coincided with the erection of the Memorial plaque to those who lost their lives in both World Wars (see below).

The previous year, on 11th January 1950, the remnants of the Wickhamford Estate, owned by the Trustees of J. P. Lord was sold to Christ Church College, Oxford.  The Deed of Appointment in 1951, may have come about as a consequence of this sale or be co-incidental.

This event concerns the transfer of a small area of land from Elm Farm to provide the car park at the rear of the Memorial Hall (see plan below).  At this time, a cycle shed was removed. 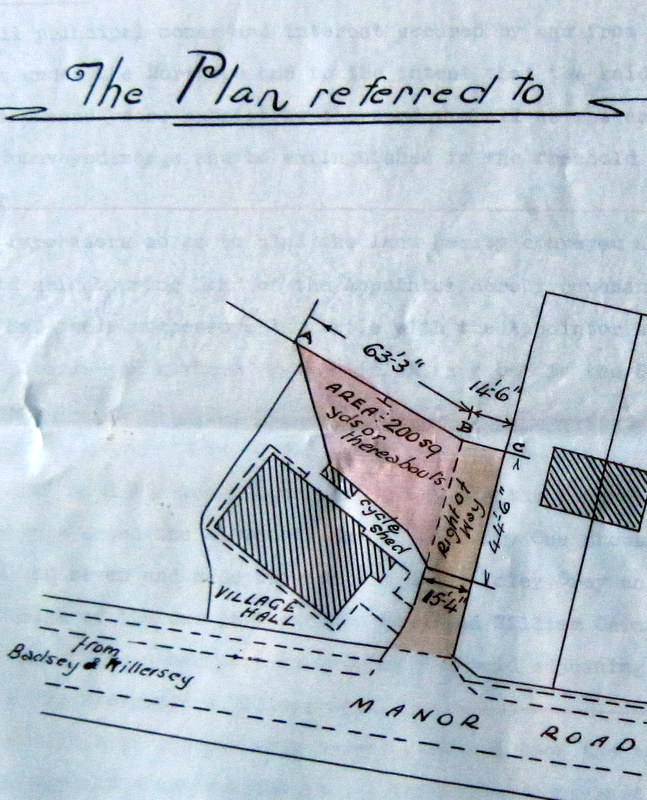 (F) In November 1991, much building work was done at the Hall, including the building of an extension by the entrance to accommodate the new ladies’ toilets.  The picture below shows the exterior of this end of the building in June 1991, before building work began. 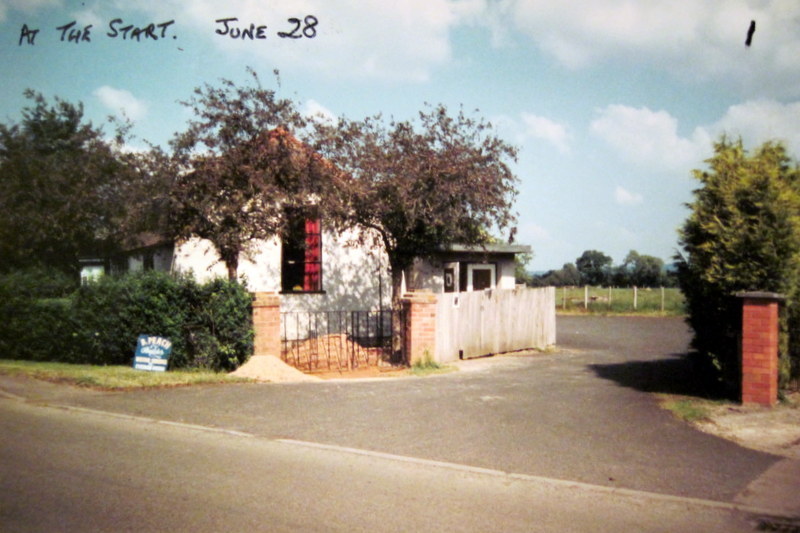 (G) On 22nd December 2004 the Hall’s governance was passed over to The Charity Commissioners for England and Wales.  This document states that the scheme to be undertaken would govern the charity “previously known as Wickhamford Parish Room and Workmen’s Club or Wickhamford Memorial Hall".  It was to be known by the latter name in all future correspondence.

Under this arrangement, the following conditions of use applied -

(1) The object of the charity is the provision and maintenance of a village hall for use of the inhabitants of the area without distinction of political, religious or other opinions, including use for:

(a) meetings, lectures and classes, and

(b) other forms of recreation and leisure-time occupation, with the object of improving the conditions of life for the inhabitants.

(2) The committee must allow the parochial church council of the ecclesiastical parish of Wickhamford free use of the property on Sundays and one other day each week.

(3) The land identified in part 2 of the schedule to this scheme must be retained by the committee for use of the object of the charity.

(H) Following severe flooding in 2007, the wooden floor of the Hall had to be re-laid and at this time the stage area was removed.  The kitchen needed some new units installed and a new boiler was mounted on the wall.

(I) During the Covid pandemic, in 2020/21, the Hall could not be used and compensatory funding was paid by Wychavon Council.  This was used to redecorate the Hall and kitchen, lower the Hall ceiling and improve the lighting.

The Memorial Hall continues to be used by village groups, and those from elsewhere, for regular meetings and for parties.