The Poulter family have farmed in Wickhamford since shortly after the Second World War, when Leslie Poulter bought Pitchers Hill Farm in Manor Road. At that time it included the farmhouse – the present Wickham House – which was sold off soon afterwards.

Leslie was born on 11th October 1899 at Stamford Hill, North London. His father was Edward Charles Davis Poulter who, at the time of the 1901 census, was a commercial traveller; his mother was Elizabeth nee Clarke. Ten years later, Edward was a wholesale stationer and young Leslie was away at boarding school, Kent College, Canterbury. He is said to have distinguished himself there both academically and in sport. He later attended Harper Adams Agriculture College, on a veterinary course, until the War interrupted his studies.

Leslie Poulter originally wanted to join a mounted unit of the Army but whilst attending a medical board in Whitehall was persuaded to try for the Royal Flying Corps. Before he had decided on this course a cousin, who was an observer in the Royal Naval Air Service, convinced him that the Naval service was a better option.

Following his success at the RNAS selection board he was appointed to HMS President as a Probationary Flight Officer (PFO). He purchased his uniform at Gamages and reported to the Royal Naval College, Greenwich, on 11th November 1917 to receive basic instruction. Fifty strong intakes were drafted every two weeks and instruction was given in theory of flight, navigation, map reading, aircraft construction, engines and armaments.

Leslie Poulter passed out with a 2nd class certificate in all subjects and was posted for flying training. Cadets had a choice of training at either Cranwell, Lincolnshire or at Vendome, France and he decided on the latter.

Cadet Poulter, and twenty others in his party, left Charing Cross station on 6th February 1918 on a 48 hr journey to Vendome, via Paris. After arriving at 4 a.m., they had to be on parade at 9 a.m. Vendome, about 96 miles South West of Paris, was a large aerodrome and he was attached to ‘F’ Flight to commence training on a Caudron GIII aircraft. He was initially required to complete 10 hr flying on this type of aircraft before going solo.

On 9th February 1918, Leslie Poulter had his first experience of flying – 13 minutes of being flown in circuits around the aerodrome (see Appendix). On 9th March, after only 4 hr training, he went solo and finished his training on Caudrons on 18th March and moved on to Curtiss aircraft. By 24th March he had completed his basic training having amassed 22 hr 35 min. of flying.

Before Lt Poulter had decided which type of aircraft he would like to fly there was a call for volunteers to fly seaplanes and this appealed to him. He left France, via Paris, (where he experience the shelling of the city by the German ‘Big Bertha’ gun) and after a short leave reported to Calshot, on Southampton Water on 31st March.

Calshot was equipped with Wright seaplanes and the Short 184 and it was on the latter type that Leslie Poulter started training. He commenced with taxi-ing on 6th April, followed by a short flight at 1000 ft. A number of flights followed with occasional mishaps that require his aircraft to be towed back to base. On 19th May, in a Wright seaplane 2193 he suffered engine failure over Cowes and had to force land by Lee-on-Solent and was towed in. After more incidents, his last flight at Calshot, on 29th May, was in a Norman Thompson 2562. For some reason all of the flying crew were taken out in the Solent in a coaling barge and experienced the task of coaling a ship ! After a short period of leave, Lt Leslie Poulter was posted to No 253 RNAS squadron, Bembridge, on 10th June 1918. (By this time he was in the Royal Air Force, formed on 1st April by the amalgamation of the RNAS and RFC.)

Bembridge, on the Isle of Wight, was a base for anti-submarine duties over the English Channel and Southampton Water. The area of which No 253 squadron flew was divided into squares, each of 25 sq. miles in area and given a letter of the alphabet. This enabled aircraft to give the location of enemy submarines and also report in the event of a crash landing in the sea. Lt Poulter’s first sortie was on 15th June, when, with an observer, he spent 3 hr at 1000 ft in a Short 2383 being shown the squadron’s area of responsibility. On 17th June he flew solo on an air test and on the 21st escorted two ships bound for Le Havre. On 23rd June, a burst oil pipe led to a landing in a very heavy sea in a Short 1755. He and his observer were picked up by a destroyer and only the aircraft engine was salvaged. Further forced landing in the sea were made on 25th June, 4th July and 18th July. On 27th July, he attempted to land in Bembridge Harbour, but the landing was too fast and he flew onto the beach and the Short ended up on its nose.

The end of the Great War

Leslie Poulter was not engaged on flying duties again until October, when he carried out a number of patrols over the squadron’s area. On 11th November 1918, while flying with Lt Shaw as observer, on patrol 60 miles South East of St Catherine’s Point both oil pressure gauges fell to nil. He dropped the bombs he was carrying and Lt Shaw send off and SOS via a carrier pigeon. After flying on for half an hour without sighting a vessel that might give assistance he was forced to land in the sea once again. Eventually, a destroyer picked him up at 9 p.m, having set off at 9 a.m. He was concerned that he and Lt Shaw might be sitting targets for any German craft in the area, but were informed that the War had ended two hours after they had taken off that morning.

For the next few months he was engaged on ferrying duties, mainly of new aircraft from Dundee to Felixstowe. On his last delivery flight, on 1st March 1919, he was observing a number of surrendered U-boats coming into Harwich when his engine cut out. Avoiding a line of flying boats moored at Harwich he landed in the sea but tore off the undercarriage. He and a passenger were picked up by boat and the aircraft was later salvaged.

Leslie Poulter was demobilised at Crystal Palace on 5th March 1919 having flown 168 hours, of which 96 were on operational patrol flying. He was involved in ten crashes without injury to himself or passengers.

After demobilisation, Leslie Poulter returned to Harper Adams Agricultural College to complete his course, from 1919-1921. He then worked for a number of years as a stockman before joining Fisons as one of their first fertiliser salesmen, travelling from Cambridge to Cornwall by motorcycle and sidecar.

He moved to Evesham in 1926 and married Kathleen Janet Grieve; they lived at The Lodge of Wood Norton, where their three children were born. This was requisitioned by the B.B.C. during the Second World War, so the family moved in 1939 to The Driffold, Murcot Turn, just outside of the Wickhamford parish boundary. He joined Wallis and Co., Evesham as a manager but left to form his own business in 1946. During the War he served in the Evesham Battalion of the Home Guard, eventually leading the Childswickham Platoon as a 2nd Lieutenant.

He bought Pitchers Hill Farm in Wickhamford in 1947 and the family also acquired Mill Farm, the two farms eventually being run by his sons Gerard and John Poulter respectively. After the death of his first wife, he married Constance Mary Skeens in 1967 in Bishops Cleeve and he died there on 21st September 1980.

Many thanks are due to John Poulter for supplying the information and photographs used in this article. In 1984 a more detailed account of Leslie Poulter’s War service was published in Cross & Cockade, Vol 15, No 1, pp 36-40.

In 1979 Leslie Poulter wrote about his first solo flight in great detail and the typescript is shown below. 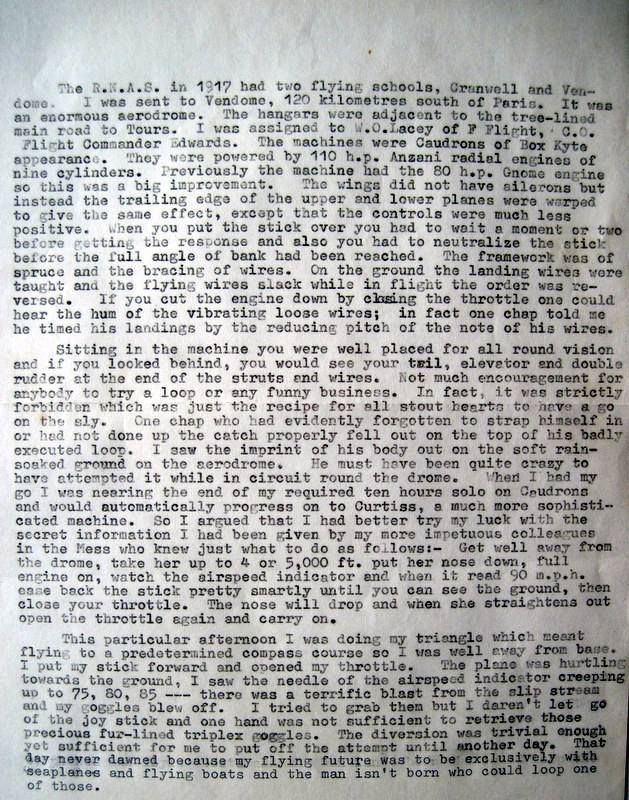 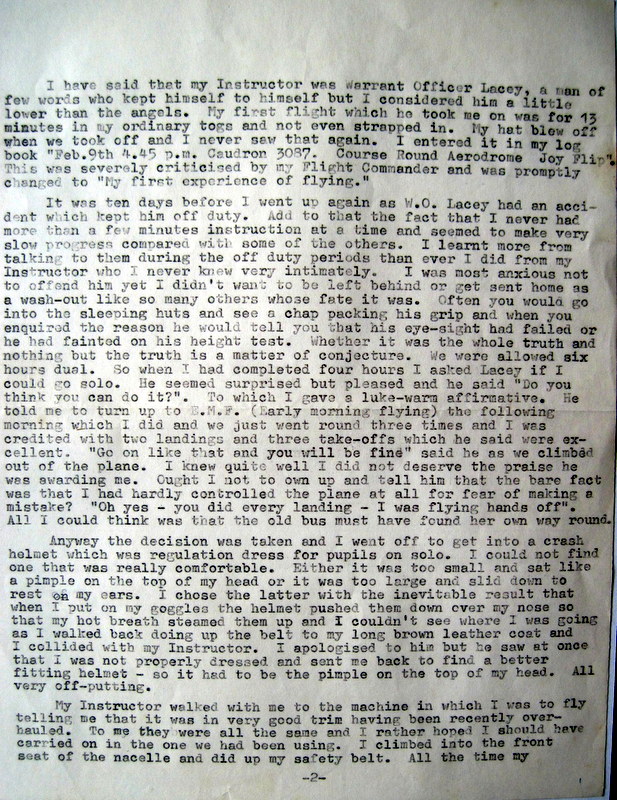 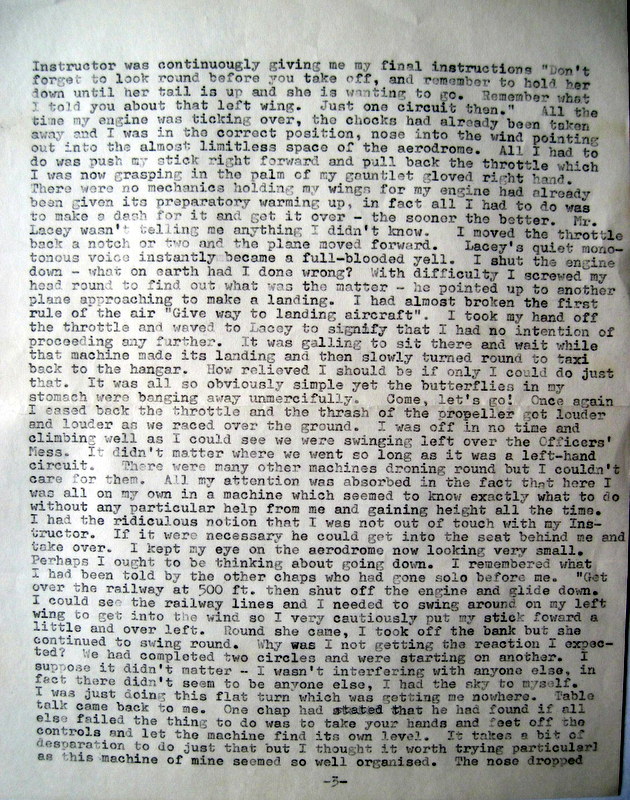 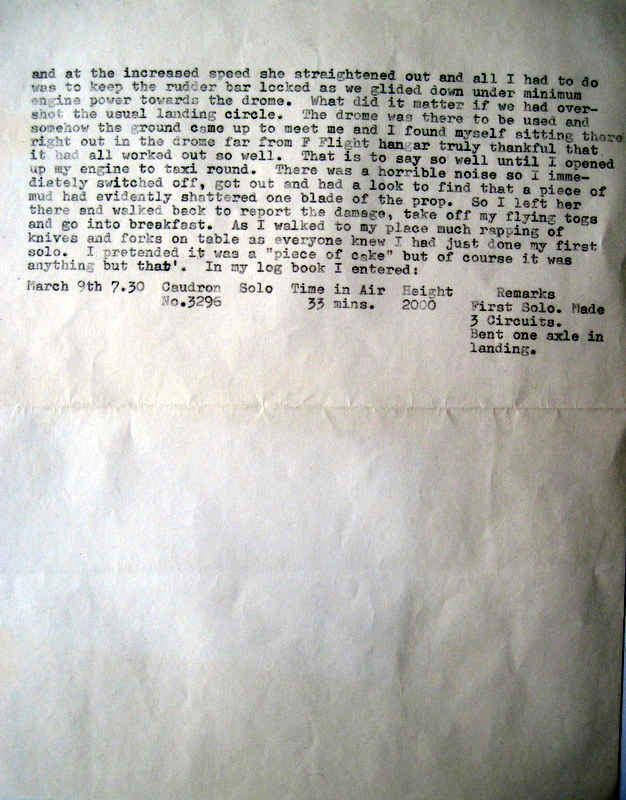