Fatal Air Crash at Wickhamford in 1941

On 14th August 1941 a Hampden AD935 aircraft, OL-U, belonging to 83 Squadron set off from RAF Scampton near Lincoln on a training flight (the air base was later to become famous as the home of the Dambuster Squadron). It was flown by Pilot P/O Ernest R Davis and his crew members were Sergeants Gilbert Arthur Newbold and W Wells. The aircraft never returned as it crashed at the Willersey Road/Golden Lane junction on the borders of Badsey and Wickhamford.  Two men died and one survived.  Both deaths are listed in the Evesham Death Register but, due to war-time censorship, there was no report of this accident in The Evesham Journal at the time, although it was reported three months later when two local people who rescued the survivor received a National Commendation in the Civil Defence Honours list.

Ernest René Davis was born on 21st July 1915, most likely in Chile, where his father, Christian Ernest Davis, had gone to work in 1913.  Incoming passenger lists for September 1929 reveal that Ernest travelled from Coronel, Chile, to Liverpool, and was headed for Brighton College where he was to become a pupil; he remained at Brighton College until 1931.  In the late 1930s, Ernest married Helga Braasch in Peru.  The couple arrived in England on 4th March 1940, their proposed address being 26 Kensington Court Gardens, London. Ernest joined the Royal Air Force and Helga began working as a nanny to two children of the Loehnis family, at Hodys Place, Wickhamford.

On that fateful day in August 1941, Ernest Davis told his wife that he would bring the aircraft over from Lincolnshire to fly past Hodys Place. He attempted a low pass, approaching from the west, probably following the line of Wickhamford Lane towards the Manor and Church. As he came in to the village the plane clipped the tops of some trees, just missed hitting the houses and then crashed into an apple orchard that was alongside the Badsey to Willersey Road.  The orchard belonged to Mr Ballard of Badsey. 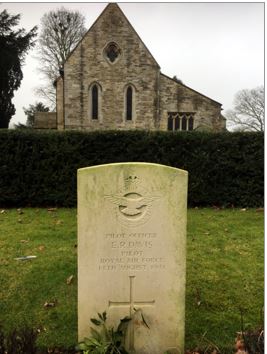 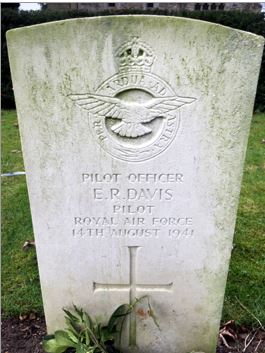 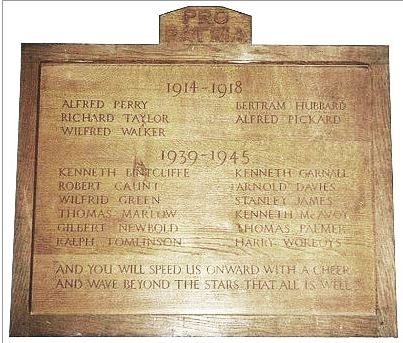 Gilbert Newbold was in the Volunteer Reserve of the RAF.  He was born in 1920 at Barrow-upon-Soar, Leicestershire, and he had attended Humphrey Perkins School there.

Gilbert Newbold, aged 20, was killed in the crash.  He is buried in Sileby Cemetery, Leicestershire and his name appears on the Humphrey Perkins School 'Old Boys' Memorial Roll of Honour, Barrow-upon-Soar, Leicestershire (pictured right).

The Survivor and the Rescuers

Sergeant W Wells survived the crash, thanks to the quick thinking of two local people.  His service record stops in 1941, so presumably he was unfit for further military duties after the accident. (One source states that, although this man appears as 'W. Wells' in RAF records, he was actually 'Frederick Charles Wells'.  There are records of two RAF men of this name, in 1940 - No 1185019 - and 1946 - No 3122769.  This matter remains to be resolved).

The rescuers were 57-year-old Badsey blacksmith and market gardener, Francis Wheeler, and his daughter, 26-year-old Mrs Doris May Haynes.  They were recommended for the Albert Medal but this recommendation was turned down and no award was made.  However, they both received a National Commendation in a list of Civil Defence Honours which was published in The London Gazette.  The newspaper report in The Evesham Journal said that “they dragged and carried the pilot to safety, despite explosions from ammunition and the danger of the petrol tanks exploding” (it was the Sergeant they dragged to safety, not the pilot).  An article in The Gloucestershire Echo gave slightly more details about the crash, but did not include photos. 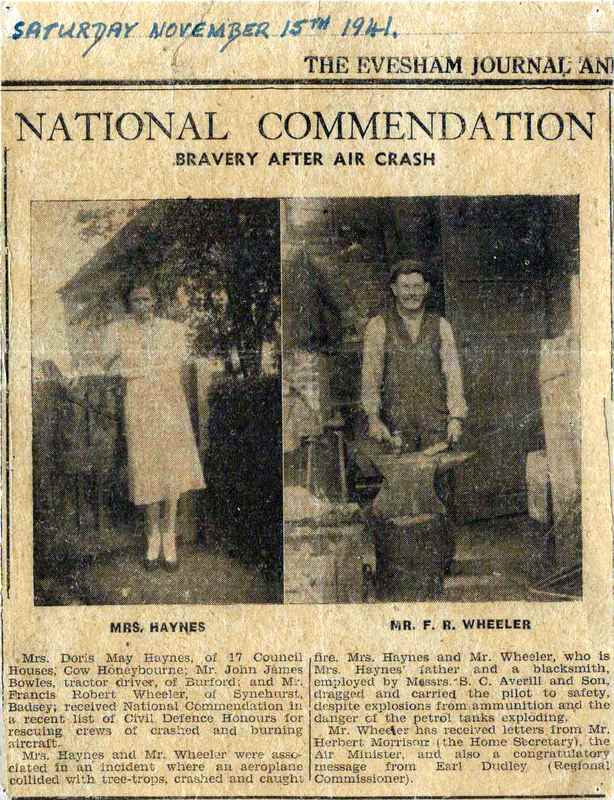 Francis died at Badsey in 1969 and is buried with his wife in St James' churchyard.  Doris Haynes was the second of his three daughters; Doris herself had four children.  We are grateful to Nicola Banks, Doris Haynes granddaughter, for providing copies of the Journal article and documents relating to the Commendation which are shown below.

NB – It should be noted that there is a description of the crash in "The Forgotten Heroes - The Air War over Worcestershire & the Clee Hills" by Glyn Warren (1985), but an eyewitness account by Derrick Daffurn, of Elm Farm, includes some errors.   He saw the plane pass over the village twice before crashing on the second occasion, which may be correct.  However, he stated that the pilot had a girlfriend, who was a nanny at the home of the Gascoigne family (who lived in Corner Cottage).  But the Gascoignes did not move to the village until after the crash and the account given above is correct with Helga Davis as the nanny concerned.

Joan Salter, aged 13 at the time of the crash, wrote about the events (with graphic details) of that fateful day.  She and her family had heard the crash from their cottage at the end of Badsey Fields Lane, Badsey.  Shortly after the crash had occurred, she cycled the mile or so to Wickhamford and was able to witness at first-hand the frightening scene.  With thanks to Mrs Joan Gould (née Salter) for allowing us to take a copy of her essay.

On Thursday August 14th 1941 there was a plane crash at 1.05.  We had just finished our dinner and Dad had gone out to weigh some beans when we heard a terrible crash.  We rushed outside to see thick, black smoke pouring into the sky.  Dad and another man were out there watching it.  Dad said he had seen the plane circling round then it hit something, turned over and crashed to the ground.  Dad got out his bike and went down to help (as he was a Special Constable).  A little after he had gone we heard a big explosion (a petrol tank).  Mother said I could go down so I jumped on my bike and went down.

It would have landed safely only it landed in the plantation as it went along.  Its wings got torn off then it burst into flames.  It was a Hamdon [?].  There should have been five men in it but there were only three.  The one only had his ankle twisted right round and a few cuts and bruises and the other was alive but unconscious.  He was terribly knocked about and Dad thinks he would have been dead before they got him to Evesham.  The dead one was found in different places.  His body was found in one with the head half off.  Dad found his legs up a tree, they were bare, one arm is still missing.  This was 20 yards away still [?].

As it was down, people were at their doors and children were cycling as hard as they could to the spot.  It was in the middle of an apple and plum plantation.  The people were out on the road close to the Lodge.  When I got there it was in flames, some of them were white hot.  The fire engine was there but was not putting it out.  At last they fitted the pipes together and they started putting out the flames.  The one part they got at but the other took longer as it was the petrol and oil cans.  It kept spreading showers of white hot sparks up as the water swished down up on it.  When it was out there was nothing to see except different things the constables found and were putting in a heap (hear about that later).  All at once the crowd pushed to the gate at the end of the field.  The police were just going to lift the dead man on the lorry.  It was covered up but I saw one of his hands from underneath the cover.  It was terrible.  It was like five claws blackened from the fire.  After that I went home with Dad.  Here are the facts which I heard from Dad.