Although VE Day and VJ Day were celebrated in 1945, official Victory Celebrations were not held until 8th June 1946.  There was a large parade in London (programme front page, below), with representatives from all of the Allied nations, apart from the USSR, Yugoslavia and Poland.  Disagreements occurred between the communist Polish Government and representatives of the Free Polish forces, so neither attended.

Reports appeared in The Evesham Standard of celebrations that were held in Badsey, Aldington and Wickhamford on 8th June, but the weather was wet, so most outdoor events were cancelled and held a week later. 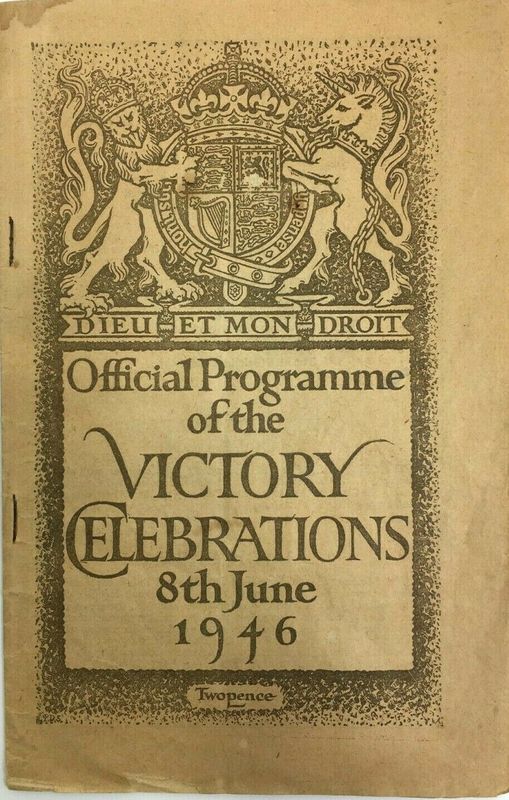 Arrangements had been made to hold tea in the playground, but wet weather meant a hasty move into the school.  Three hundred children partook of jellies, jam tarts and cakes; R. Butler supplied the gathering with ice cream and Mrs H. Smith some of the cakes.  After tea, Miss Audrey Daniels opened the entertainment with songs and dances by some of her pupils.  The programme included a tap-dance, “Syncopation”, splendidly executed by Rowlatt Cook, and ballet, “The Conjurer”, by Audrey Daniels and Rowlatt Cook. Other dances and songs followed, including the “Sailors Hornpipe” and “Highland Fling”. A conjurer then performed and he caused roars of laughter. There were many and varied fancy dresses in the competition.  The Rev J. G. and Mrs Jeffreys had tea with the children, who finally went home tired but happy.  During the day, the Badsey bellringers rang a Victory peal on the bells.

Despite the inclement weather, Victory Day celebrations largely went ahead in Aldington as planned.  Most of the sports events took place on the 8th June with those not held took place the following Monday.  Events on the day included flat, egg & spoon and wheelbarrow races, a treasure hunt and bowling.  A tea took place and dancing and a darts competition were held in the evening. The organisation of the day’s events was undertaken by J. Holding jnr.  The Rev Jeffreys called in during tea, to speak to the children.

The Victory Day celebrations had to be held in the Memorial Hall, owing to continual rain in the afternoon and the outdoor sports had to be postponed until the following Saturday.  Despite this, the children enjoyed a splendid tea, after which various games were arranged in the Hall.  The children’s fancy dress competition attracted a good number of entrants, with prizes going to J. Wright, S. Griffiths and B. Cox.   Later in the evening, a dance took place, with music supplied by Syd Allen’s radiogram.  The Rev. Jeffreys addressed the children during tea.

When the outdoor sports took place, the starter was Mr H. Collett and the judges were Messrs E.W. Sturt, G. Cox, S. Carter and E. Willis.  The Evesham Standard gave details of every event, listing who came 1st, 2nd and 3rd.  Twelve flat races ranged from 40yds, for the under 4s, up to 100yds for boys aged 13 and 14. There were three-legged races, wheelbarrow races and potato races.  The names of all of the successful children were given in the 22nd June edition of the newspaper.

In the original planning for the day in Wickhamford, it was reported that two ladies in the village would be sought to act as judges for the fancy dress, beauty and ankle contests, but there was no mention later of the last two taking place!