In 1875, in England and Wales, the two-volume Return of Owners of Land, 1873, was published and sold for 10s 6d each in two leather-bound volumes (edited by John Lambert).  It was the first complete picture of the distribution of land in Great Britain since the 1086 Domesday Book and is sometimes called the "Modern Domesday".

Why the Return was made

The Return arose from the desire of the Victorian governing landed classes, many of whom sat in the House of Lords, to counter rising public clamour (encouraged by the press) about what was considered the monopoly of land.

In the explanatory statement at the beginning of the book, it was explained that the return showed the number and names of owners of land of one acre and upwards, whether built upon or not, in each county, with the estimated acreage and annual gross estimated rental of the property belonging to each owner.  In addition, the number of owners of land of less than one acre and the extent of commons and waste lands in each county was recorded.  The statement went on to say: 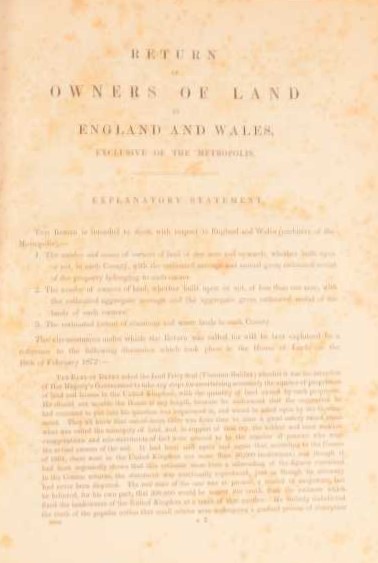 The circumstances under which the Return was called for will be best explained by a reference to the following discussion which took place in the House of Lords on the 19th of February 1872:

THE EARL OF DERBY asked the Lord Privy Seal (VISCOUNT HALIFAX) whether it was the intention of Her Majesty's Government to take any steps for ascertaining accurately the number of proprietors of land and houses in the United Kingdom, with the quantity of land owned by each proprietor. He should not trouble the House at any length, because he understood that the suggestion he had ventured to put into his question was acquiesced in, and would be acted upon by the Government. They all knew that out-of-doors there was from time to time a great outcry raised about what was called the monopoly of land, and, in support of that cry, the wildest and most reckless exaggerations and mis-statements of fact were uttered as to the number of persons who were the actual owners of the soil. It had been said again and again that, according to the Census of 1861, there were in the United Kingdom not more than 30,000 landowners; and though it had been repeatedly shown that this estimate arose from a misreading of the figures contained in the Census returns, the statement was continually reproduced, just as though its accuracy had never been disputed. The real state of the case was at present a matter of conjecture, but he believed, for his own part, that 300,000 would be nearer the truth, than the estimate which fixed the landowners of the United Kingdom at a tenth of that number. He entirely disbelieved the truth of the popular notion that small estates were undergoing a gradual process of absorption in the larger ones. It was true that the class of peasant proprietors formerly to be found in the rural districts was tending to disappear—for the very good reason that such proprietors could, as a general rule, obtain from 40 to 50 years' purchase for their holdings, and thereby vastly increase their incomes. In the place of that class, however, there was rapidly growing up a new class of small owners, who, dwelling in or near towns or railway stations, were able to buy small freeholds. He believed this new class would fully replace, and perhaps more than replace, the diminution in the other class to which he had referred. He apprehended that through the agency of the Local Government Board it would be easy to obtain statistical information, which would be conclusive in regard to this matter. t exceeding an acre each, the number of separate owners being stated, but not the extent of each holding.

The government was in agreement with the suggestion of the return and, in 1872, the Local Government Board was ordered to compile a list of landowners from ratings records. One return was prepared for England and Wales (excluding London), and separate returns were prepared for Scotland (in 1874) and Ireland (in 1876). Holdings were listed by size (in acres, roods and perches) and estimated yearly rental of all holdings over one acre. It was laid out by county and landowner, with an identifying address for each landowner.

Unlike the Domesday Book, the 1873 Return was not based on original research by surveyors but compiled existing parish data. The valuation lists of 1873 were prepared under the provisions of the Union Assessment Committee Act of 1862.  This provided for the appointment of an assessment committee by the guardians of every union for investigating and supervising the valuation of taxable properties in each parish of a union for assessment purposes. The overseers of each parish were required to make out a list of all taxable properties and their annual value in the following format: occupant, owner, property description and name (or location, estimated area, gross estimated rental, and taxable value. Parish valuation lists were deposited with the clerks of the unions, and application was made to those officers to prepare and furnish particulars for the 1873 Return.

For landowners with extensive, scattered holdings, the address did not correspond to the land's location and could be outside the county in question. John Pickup Lord, for example, a major landowner in Wickhamford, Badsey and Aldington, was listed in the Lancashire return as living at Great Malvern and having just over 60 acres.  In the Worcestershire return, he was listed as living at Worcester and having nearly 1510 acres.  The location of the land was not given.

The 1873 Return had inaccuracies (some significant), and a revised edition—The Great Landowners of Great Britain and Ireland—was published in 1883 by John Bateman (1839–1910).

List of Worcestershire Landowners with a Badsey or Aldington address

The situation in Wickhamford was different as virtually the whole village was owned by the non-resident John Pickup Lord, who had bought the estate from Lord Sandys in 1869.  The acreage that J P Lord owned in Worcestershire included lands owned at Hallow as well as Wickhamford, Badsey and Aldington.  The only other known landowner in Wickhamford, William Fisher, had owned just under an acre at the time of the 1842 Tithe Map.