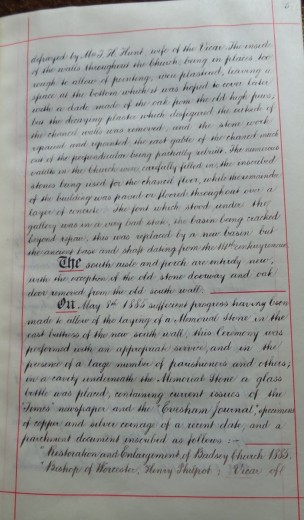 … defrayed by Mrs T H Hunt, wife of the Vicar.  The inside of the walls throughout the church, being in places too rough to allow of painting, were plastered, leaving a space at the bottom which it was hoped to cover later with a dado made of the oak from the old high pews; but the decaying plaster which disfigured the outside of the chancel was removed, and the stone work repaired and repainted, the east gable of the chancel much out of the perpendicular being partially rebuilt.  The numerous vaults in the church were carefully filled in, the inscribed stones being used for the chancel floor, while the remainder of the building was paved or floored throughout over a layer of concrete.  The font which stood under the gallery was in a very bad state, the basin being cracked beyond repair; this was replaced by a new basin but the ancient base and shaft dating from the 14th century remain.

The south aisle and porch are entirely new, with the exception of the old stone doorway and oak door removed from the old south wall.

On May 8th 1885 sufficient progress having been made to allow of the laying of a Memorial Stone in the east buttress of the new south wall, this ceremony was performed with an appropriate service, and in the presence of a large number of parishioners and others, in a cavity underneath the Memorial Stone a glass bottle was placed, containing current issues of the “Times” newspaper and the “Evesham Journal”, specimens of copper and silver coinage of a recent date, and a parchment inscribed as follows:

Restoration and Enlargement of Badsey Church 1885