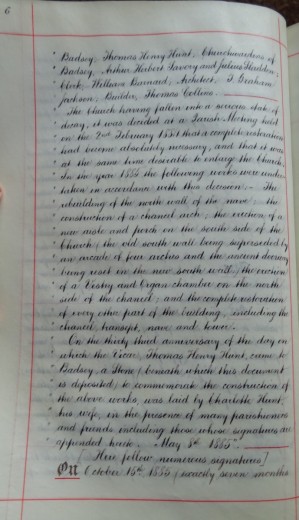 The church having fallen into a serious state of decay, it was decided at a parish meeting held on the 2nd February 1884 that a complete restoration had become absolutely necessary, and that it was at the same time desirable to enlarge the church.  In the year 1885 the following works were untaken in accordance with this decision:  the building of the north wall of the nave; the construction of a chancel arch; the erection of a new aisle and porch on the south side of the church, the old south wall being superseded by an arcade of four arches and the ancient doorway being reset in the new south wall; the erection of a vestry and organ chamber on the north side of the chancel; and the complete restoration of every other part of the building, including the chancel, transept, nave and tower.

On the thirty-third anniversary of the day on which the Vicar, Thomas Henry Hunt, came to Badsey, a stone (beneath which this document is deposited) to commemorate the construction of the above works, was laid by Charlotte Hunt, his wife, in the presence of many parishioners and friends including those whose signatures are appended hereto.  May 8th 1885.