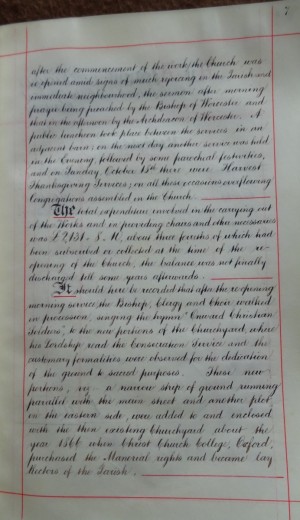 … after the commencement of the work) the Church was reopened amid signs of much rejoicing in the parish and immediate neighbourhood, the sermon after morning prayer being preached by the Bishop of Worcester and that in the afternoon by the Archdeacon of Worcester.  A public luncheon took place between the services in an adjacent barn; on the next day another service was held in the evening, followed by some parochial festivities, and on Sunday October 18th there were Harvest Thanksgiving Services; on all these occasions overflowing congregations assembled in the church.

The total expenditure involved in the carrying out of the works and on providing chairs and other necessaries was £2,131.8.10, about three-fourths of which had been subscribed or collected at the time of reopening of the church, the balance was not finally discharged till some years afterwards.

It should here be recorded that after the reopening morning service, the Bishop, Clergy and Choir walked in procession, singing the hymn, “Onward Christian Soldiers”, to the new portions of the churchyard, where his Lordship read the Consecration Service and the customary formalities were observed for the dedication of the ground to sacred purposes.  These new portions, viz a narrow strip of ground running parallel with the main street and another plot on the eastern side, were added to and enclosed with the then existing churchyard about the year 1866 when Christ Church College, Oxford, purchased the Manorial rights and became lay Rectors of the parish.