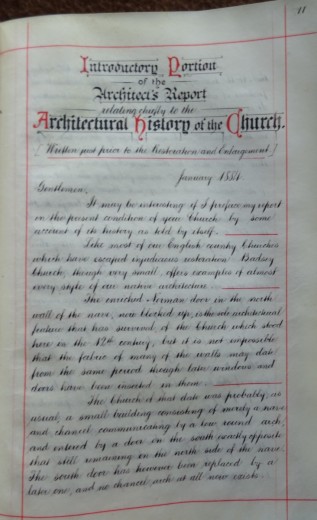 Relating chiefly to the

Architectural History of the Church

[Written just prior to the Restoration and Enlargement]

It may be interesting if I preface my report on the present condition of your Church by some account of the history as told by itself.

Like most of our English country churches which have escaped injudicious restoration, Badsey Church, though very small, offers examples of almost every style of our native architecture.

The enriched Norman door in the north wall of the nave, now blocked up, is the sole architectural feature that has survived of the church which stood here in the 12th century, but it is not impossible that the fabric of many of the walls may date from the same period though later windows and doors have been inserted in them.

The church of that date was probably, as usual, a small building consisting of merely a nave and chancel communicating by a low round arch, and entered by a door on the south exactly opposite that still remaining on the north side of the nave.  The south door has however been replaced by a later one, and no chancel arch at all now exists….