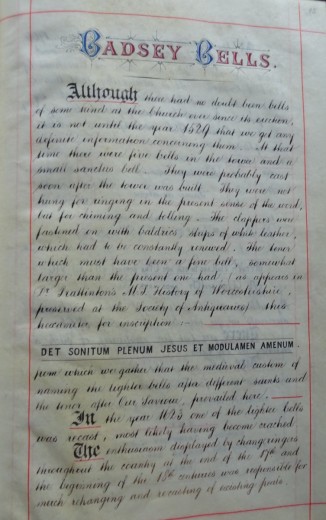 Although there had no doubt been bells of some kind at the church ever since its erection, it is not until the year 1529 that we get any definite information concerning them.  At that time there were five bells in the tower and a small sanctus bell.  They were probably cast soon after the tower was built.  They were not hung for ringing in the present sense of the word, but for chiming and tolling.  The clappers were fastened on with baldrics, strips of white leather, which had to be constantly renewed.  The tenor, which must have been a fine bell, somewhat larger than the present one had (as appears in Dr Prattinton’s MS History of Worcestershire, preserved at the Society of Antiquaries) this hexameter for inscription:

from which we gather that the medieval custom of naming the lighter bells after different saints and the tenor after Our Saviour, prevailed here.

In the year 1623 one of the lighter bells was recast, most likely having become cracked.

The enthusiasm displayed by change-ringers throughout the country at the end of the 17th and the beginning of the 18th centuries was responsible for much re-hanging and re-casting of existing peals….