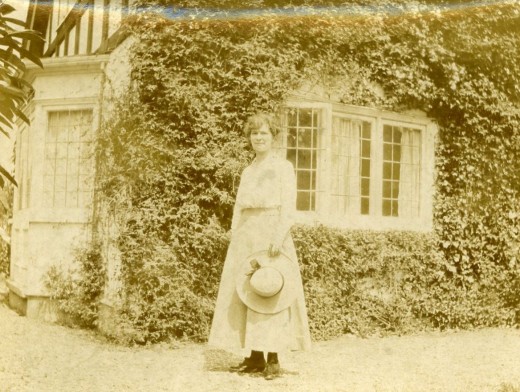 In June 1917, Mela Brown Constable’s mother, Clara Brown Constable, rented a house in Marlow-on-Thames, where the family had lived for a time during Mela’s childhood.  The house was called Riverwoods House and was close to the river.  Mela, who was in between jobs, went to stay with her mother and sister, Barbara, in Marlow for a few weeks.

In a letter of 13th August 1917, Mela enclosed this photo taken by Barbara.  She described it as “rather a funny one but I was trying not to laugh.  I am in the pale blue and white cotton frock I told you I was making.  The fashions have changed a lot since you were home.”  On the reverse of the photo she wrote:  “In case you don’t know who this is I sign my full name and address!  Mela Brown Constable, Riverwoods House, Marlow-on-Thames.”

We are grateful to Rosemary Richards (granddaughter of Mela) for providing us with a copy of this photo.