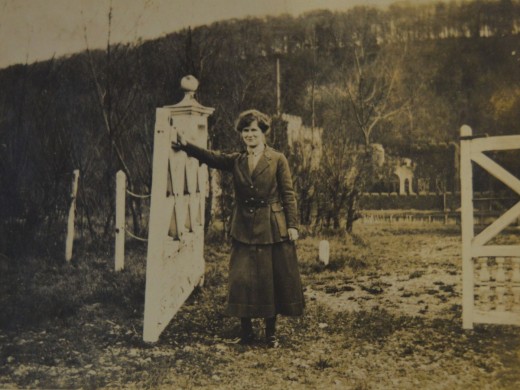 Mela Brown Constable in the uniform of the Women’s Army Auxiliary Corps which she joined in September 1917.

These two photographs were presumably taken in early September 1917 just after Mela had joined the WAACs, as in a letter of 1st September from her mother’s home at Marlow, she wrote to her fiancée, Cyril Sladden:  “On completing the short course of training I have to don the King’s Uniform!  Viz – a khaki coat and skirt, khaki blouse, shoes and puttees, khaki felt hat, with overcoat etc.”  Cyril had obviously received the photos by 12th October 1917 as in a letter of that date, he wrote:  “To begin with you sent two snapshots of yourself, one of which is simply perfect, I mean the one taken with you leaning against the white railings, and the river behind.  I just love to gaze at it.  It is just you looking your very best, and I cannot say more than that, can I?  If I had not fallen in love with you before I think I must have done so by that photo alone.”  The photo was taken at Riverwoods House, Marlow.

As regards the second photo, which shows Mela in uniform with her sister, Barbara, Cyril commented:  “The other suffers by comparison.  You should never try to stop laughing when being photographed, because you never do actually: when you want to laugh you do, and it is the greater delight for anybody near enough either to see or hear. And so you see the photo is not quite natural.  All the same it has its points.  It shows you have got a ripping laugh trying to break through, and it shows your splendid upright strong figure which I always admire so much.  And you don’t look a year above 20 in either.  What on earth a girl like you can see in an old fogey …..!”