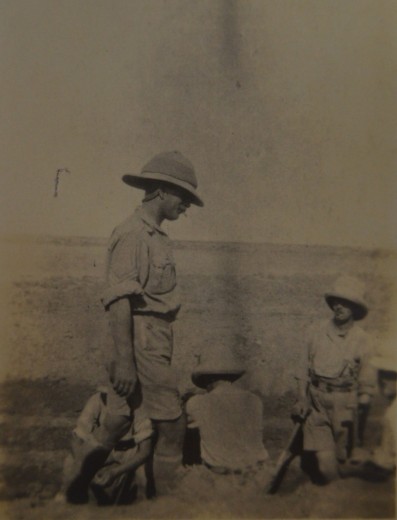 Trench warfare was not unique to the western front.  In Mesopotamia, trenches were used, too.  Cyril Sladden’s battalion, the 9th Worcestershire Regiment, spent the first part of January 1917 in digging trenches, as described in a letter of 31st January 1917 to his father.  The caption on the back of the second photo says in Cyril’s own handwriting, “Digging the Sannayat trenches at Amara; Sgt Swinnerton, Sgt Robinson, Pte Ford”.  There are too many people by the name of Robinson and Ford in the Worcestershire Regiment to be able to say who they were, but Sergeant Swinnerton was Major Swinnerton (Major was his actual forename, not his rank) who was born in Staffordshire in 1897 and died in the West Midlands in 1987, aged 90.

The photos were taken by Cyril’s colleague, Lieutenant Norman Ainsworth, in January 1917.

Keeping watch in the trenches