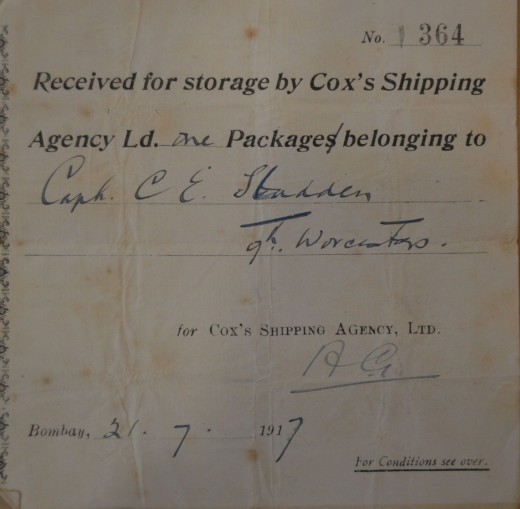 Storage note for Cox’s Shipping Agency Ltd, deposited by Cyril Sladden on 21st July 1917.  A letter from Cyril to Mela Brown Constable written on 10th October 1917 reveals that he had got a fellow officer to store some carpets at the Bombay office on his behalf:  “Lake returned a little while ago from his leave in India, looking very fit and having enjoyed his time very well I think.  He safely got my carpets to Cox’s in Bombay, so at some great time when shipping is rather more at liberty I hope they will ultimately reach home.  I shall probably be wanting to buy more if we are out here long enough and I get a chance on the return journey.”

The carpets in question were those which he described in a letter of 18th May 1917:  “I have also been buying a pig in a poke.  A number of carpets, the property of a hostile trading concern, were exported to be on sale at divisional headquarters.  They had been valued by an expert.  Anticipating more applicants than carpets they fixed up a lottery and sent along and asked for names.  We could not find out any details re prices etc, however I put my name down and drew one for Rs 22 – one of the most expensive that was going.  It turns out to be quite large.  It is long and narrow, 4 feet by 12 at a guess, and therefore rather an awkward shape for most rooms and on that account I should not have chosen it had I been able to have any choice.  However I quite like the pattern and we shall have to select a home to fit the carpet!  I hope I shall be able to get all this accumulation of carpets safely to India, if I get leave it will be easy enough.”

Cyril’s granddaughter, Anne Fraser, is the proud possessor of one of the carpets.  It is possible, though, that Anne’s one is the Persian rug which Cyril sent to his youngest sister, Juliet (known as Betty) for her 21st birthday, as described in a letter of 19th August 1918. 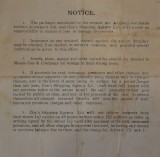