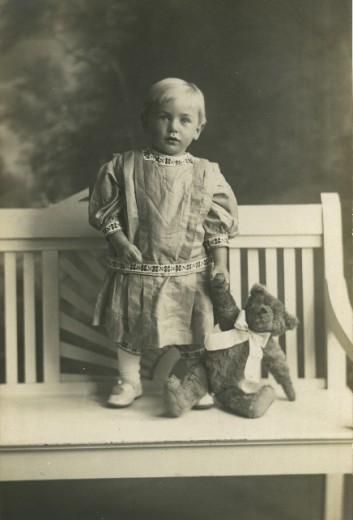 These photos were bought at auction by Ray Jones of Worcester.  They relate to the Churchill family:  the wives and children of brothers William Henry (1877-1968) and George Henry (1880-1964).

William had married Rosina Preston in 1908 in their native Devon.  They spent all their married life in Badsey where William had moved to take up market gardening.  They had three sons:  Edward Preston (1909-1956), William Robert (1912-1992) and Ronald George (1916-2009).  The first six photos are thought to be of this family, with the first one assumed to be Edward Churchill, the eldest child.

George married Bertha Snell in Branscombe, Devon, then brought his bride back to Badsey where he, too, was market gardening.  They had one son, George Edward (1907-1989).  George Junior is thought to be pictured as a baby with his mother and, a few years later with a bike.  George Junior is presumably on Kings School, Worcester, photo, as he became a boarder at the school in September 1919.