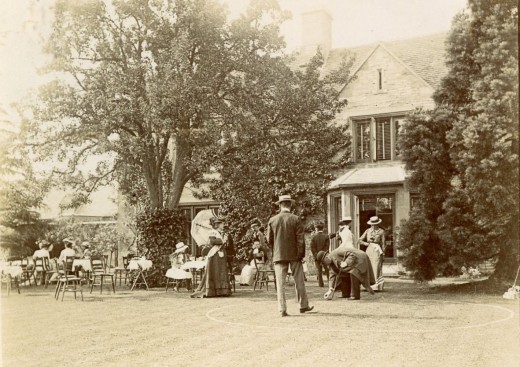 These photos are in Sladden family photo album.  A note in the album accompanying the photograph, thought to have been written by John Cyril Sladden (1920-2011), the son of Cyril and Mela Sladden, has the following words:

This snapshot is inscribed on the back, "Granny Sladden and her family playing croquet at Badsey".  If the girl sitting in front of the ivy-covered pear tree is Juliet (Betty), then the date is round about 1905.  Seward House, Badsey, Evesham, Worcestershire, was first occupied by Julius and Eugénie in 1879-80 and became their property in 1900 (when the partly-walled garden, visible on the left of the picture replaced the farmyard which had been there until then).  In the picture, Julius (later Sir Julius) is seen stooping over what appears to be a clock-golf ball and club, and the circle is marked out, for something of the sort (white-lining machine, extreme right).  His wife Eugénie is presumably the stately person with the parasol.  Besides the family of eight (four sons and four daughters) there seem to be one or two gardeners and servants, and maybe one or two young ladies from outside the family.  The magnolia on the wall of the house may or may not be in bloom, probably not, as it is high summer.  The tree on the right had disappeared by the 1920s.  The deodar tree, or rather its branches, can be seen on the left.  This lasted until the house was sold in 1985.

We are grateful to Rosemary Richards (née Sladden) for providing a copy of this photograph from the Sladden family album.