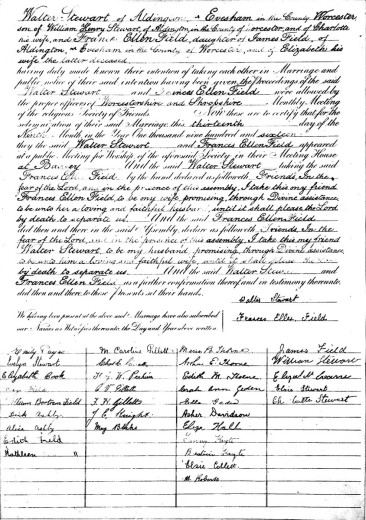 On 13th September 1916, Walter Stewart (1889-1953) married Frances Ellen Field (1891-1981) in the Quaker Meeting House on Chapel Street, Badsey.  Six months earlier he had appeared before a Military Tribunal and was granted total exemption as a conscientious objector.  Walter was born at Aldington, the son of William Henry Stewart and his wife, Charlotte (née Hartwell).  Frances was born at Aldington, the daughter of James Field and his wife, Elizabeth (née Cook).

This document was the standard certificate used in Society of Friends’ weddings; all the wedding guests signed at the end as witnesses.

We having been present at the above said Marriage have also subscribed our names as witnesses thereunto the day and year above written.

Walter and Frances remained in Badsey for the rest of their lives.  They had one son and eventually lived above the Friends’ Meeting House.

We are grateful to Peter Stewart for providing us with a copy of this certificate.