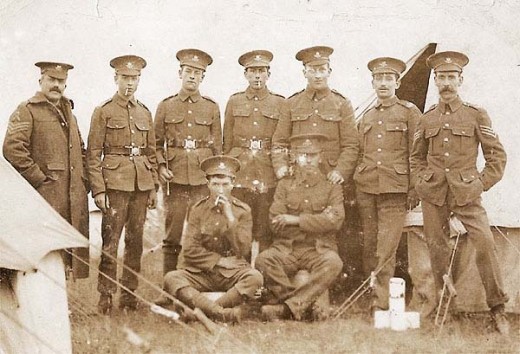 First World War photo of Corporal John Henry Walters (front row right hand side). He was known as Harry, lived at 8 Manor Road, Wickhamford and was a market gardener all his life. He was in the front line when the Great German Offensive started on March 21st 1918. His family received a note dated April 8th 1918 from his commanding officer to say that he was missing and probably in enemy hands. This proved not to be true and Harry, as he was known, received nothing more than an injured hand.

The picture belonged to Fred Mason. We are grateful to his daughter Val Harman who lent it to us and gave us the information.

Here is an article about the Walters market gardening family.